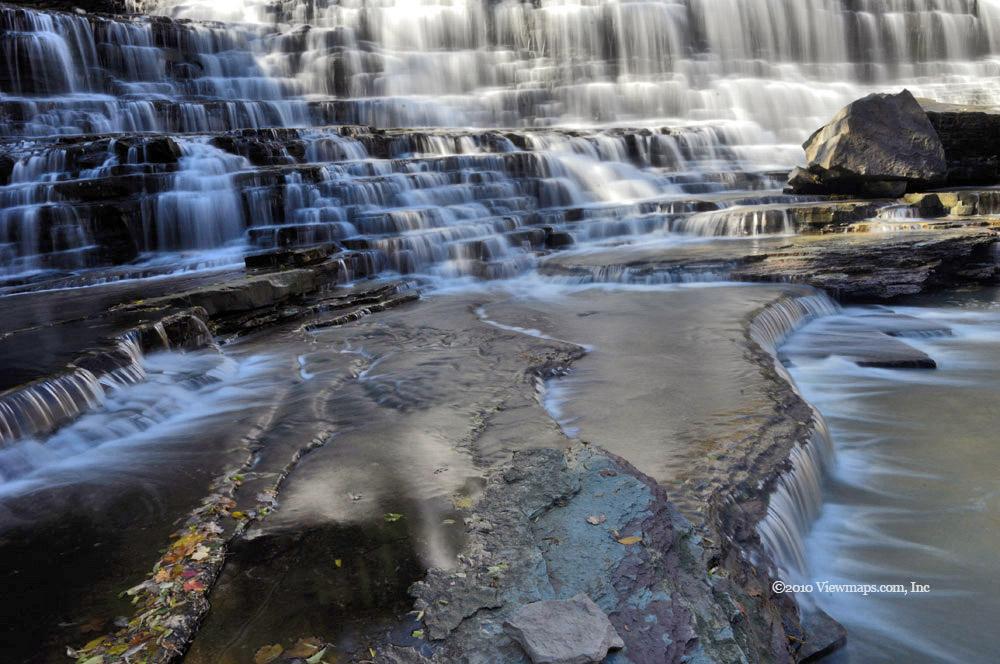 Today Mike and I resumed our nature photography with a visit to the Albion Falls. This waterfall is quite a large one compared to most of the local waterfalls. It is also very easy to access and so draws a continuous stream of admirers. While we were there, there was a constant flow of visitors, including a number of serious photographers taking shots from multiple angles much like I was doing. It was easy to climb down to the base of the drop and gather shots; the falls was a wide one with several ledges and protrusions which made for hundreds of items of interest in the curtain of water. I felt it would be worth a whole day here gathering shots of the many portions of the scene under lighting conditions that changed as the day progressed. In the end we did spend well over an hour on this one subject. Once done with the traditional view, we found a path to the top of the drop and gathered a few more while hanging over the edge!

After the Albion Falls we decided it was late enough to get lunch so we trekked along to a nice deli at Fortinos and then we set off along highway 6 to the deep south. Our first destination was the Grand River. Where we found the colours muted as we shot across the river into the sun. We took a few minutes to explore a small park on the eastern shore of the river but found only a few trees of interest. We decided to head further south and cross over to the west side. Here we found a bit more colour. Mike was unfamiliar with this side of the river. It seems that he only traveled the main road on the east and had never explored the lesser roads on the west side.

Soon we came by McKenzie Creek which flowed into the Grand, there we found some interesting trees and water shots. Once done we rounded a bend and noticed an old cemetery. I have had a growing interest in viewing these old sites and so we stopped to explore the tombstones. Some were placed in the mid 1800’s and were now barely readable. It seems that even stone will wear away and leave nothing to remind one of the person buried below. After trying to read all the older panels, we returned to the car and continued south along the back-road. We came by a few fields of interest where we gathered more photos but soon passed another cemetery on a hill that we decided to explore.

This cemetery was almost as old as the first one but was much bigger. We saw quite a few older stones as well as some very recent ones in a modern style. I was dismayed to see quite a number of plaques to young children – some less than a year old – most dating to the later 1800’s. We certainly don’t see that level of mortality anymore and I am glad for it. When we were done walking a loop around the area, time had reached 3pm and I remembered I had a scheduled radio call to my radio club friends who were participating in a Scouting radio event.

As the cemetery was on a hill I felt it was the best place around to try to reach a distant IRLP node. So we set up the mobile antenna on the roof of the car and I dialed in the frequency for the node around 40km to the east of us in Pelham, we were still on the west side of the Grand River in Cayuga. We had full scale to the repeater and the call to UBC and node 1000 went through without delay. Jay from the club responded immediately and I was able to chat with the guys for a few minutes with excellent clarity. Once done with club members I brought down the link and dialed in the Hamilton repeater Carolyn was monitoring. Again I had full scale signals, Carolyn answered immediately but after her first transmission we had mostly garbled audio from her. Not sure the cause but it would clear up for only a few words at a time. So we relayed our status to her and took off for more driving. We stopped for a coffee in Cayuga before trying some side roads.

As we were close to where Mike grew up we decided to drive past his old home and he recounted some of his adventures as a youth in the area. Some of his stories proved very interesting as he pointed out the various features of the countryside where they took place. As time was marching on we decided to start making our way back to Grimsby via the side streets. The sun was lower now and the drab colours were even more muted so we didn’t find as much to shoot as we had thought we would. We did discover an old brick silo that had some very interesting textures for us to capture.

Soon we were back in Grimsby making our way down the escarpment, and here we noticed brilliant colours in the trees along the escarpment. Though they were now shaded, they still offered some brilliant reads and oranges. It was too late to photograph them today but now that we know where the colour is, we plan to make a short trip to them tomorrow afternoon.

Though a bit disappointing in the lack of colour, they trip was a success in the area of relaxation and just plain sight-seeing. We both felt that the drive was worth every moment of it. There really is so much to see out there and we only touched a tiny portion of it.