This park has some lovely grass areas, ideal for picnicking and playing fetch with one’s dog
Category
Parks on the Air
2022 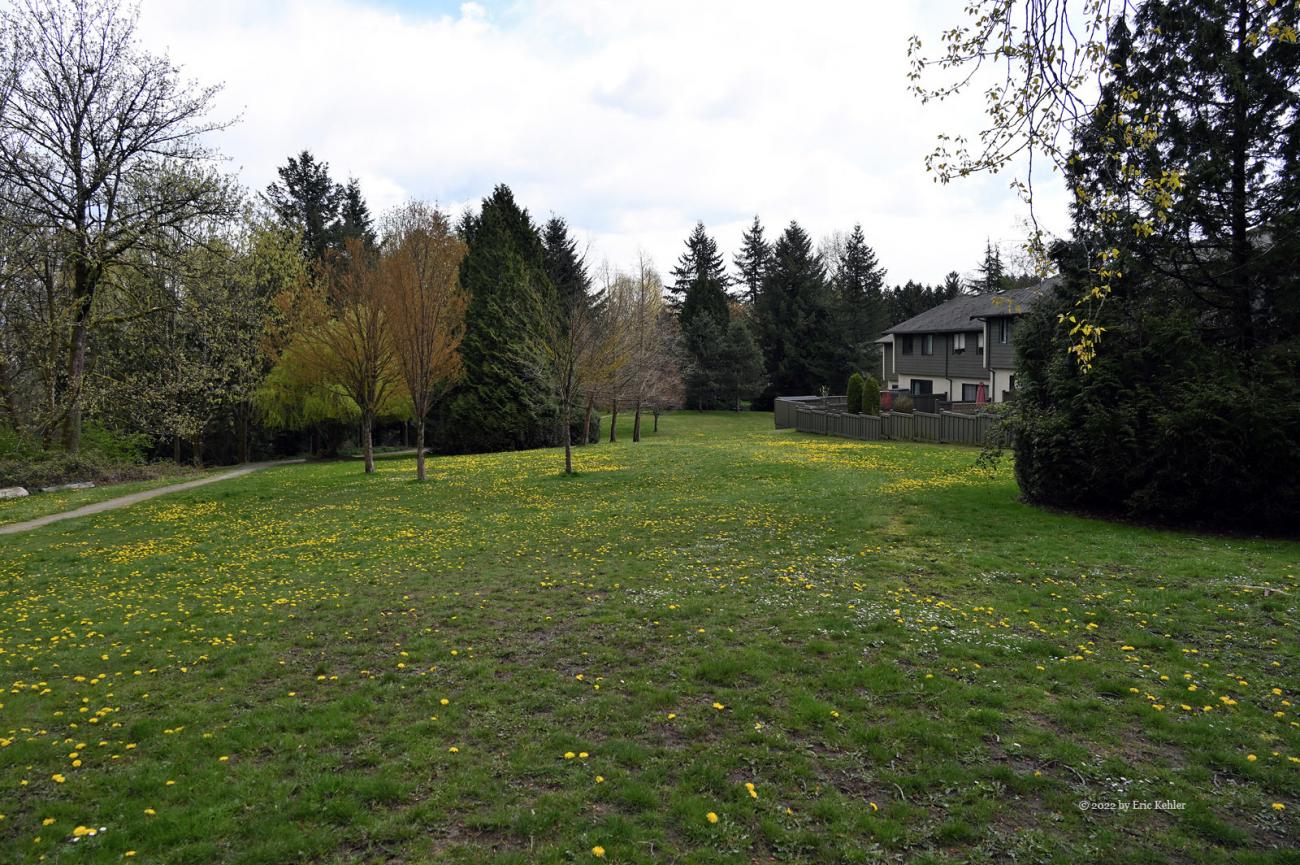 Today I travelled to Coquitlam’s Dacre Park. It is a small park just south of the Coquitlam Centre Mall. I had been planning to come here since last week, just waiting for a decent weather day. That was yesterday, unfortunately my preparations were interrupted by an office issue that needed my attention in the early afternoon. So, the visit was delayed a day to today.

The weather looked a bit iffy as the afternoon progressed so I decided to leave a bit early and get done before the possible rain might arrive. I left the house at noon and stopped to get a latte for the drive there. Light traffic made for a quick trip and soon I was pulling into a parking spot right next to the park’s entrance. I loaded up the cart and started in, gathering a few photos as I walked. The park has a small creek along the north-east side of the open grassy area.  There were park benches scattered around the periphery with nice views of the park activity. The grass though short and tidy was blanketed with yellow dandelions which added some nice colour to the spot. A local resident told me that it was all white flowers the week prior

The park is on a slope with the high end to the west and where the entrance is. I wandered down the gravel path a short way and then crossed the grass to where I decided to set up. Right to the point the slope takes a stronger drop. It didn’t take long to get the antenna up and myself ready to go. During this time a lady walked by with her dog. She wanted to throw a ball for him and I guess I was in her way, but she found a spot lower down. Being an urban park with condos lining the west and south sides, the noise floor was quite high. I have come to expect that. I was having trouble getting contacts today but eventually I had my first and they were in Indiana. That was quickly followed by a Georgia station and then trusty AJ5C in Arkansas! But then things dried up and it was a struggle getting the next station logged. I could hear a few in the noise but it was not possible to make out any callsigns.

Slowly I added a station at a time to my log but after a half hour of calling I was still short of the needed 10 contacts. I decided to change my frequency and moved up band. This seemed to help a bit though the noise was still high. At this new frequency I managed another 5 stations in 7 minutes but then things stopped cold. At the new spot I was able to work one station that I just couldn’t complete with earlier, so they did get in the log at the end. By now I had 14 contacts, not a big number but more than enough to get the park activated with its first. So, I decided to pack up. Just then a chap came wandering by asking if I was from the city as he was hoping they were finally going to do something to improve the park. I had to let him down saying it was only a ham radio operator contacting the world from his park. He thought that mildly interesting but really, he wanted the city to do something.

Well, I had activated the park and so I decided to take a few minutes and wander around gathering some photos of the various points of interest. It is a long narrow park and with the creek, it could be developed into a very pleasant location. Right now, it is very functional and the mature trees offer some nice shade and picture spots. I wandered down to the creek where a wide beach like area can be found. It is really quite pleasant there under the shade of the trees next to the gurgling creek. Done with wandering, I returned to my gear and packed up and then set off for the car. The drive home was fast and soon I was parking at home having missed any rain that may have been aiming for me.