It was our last full day in Port Stanley and I felt I had to get out and find some photos even if the weather was questionable. 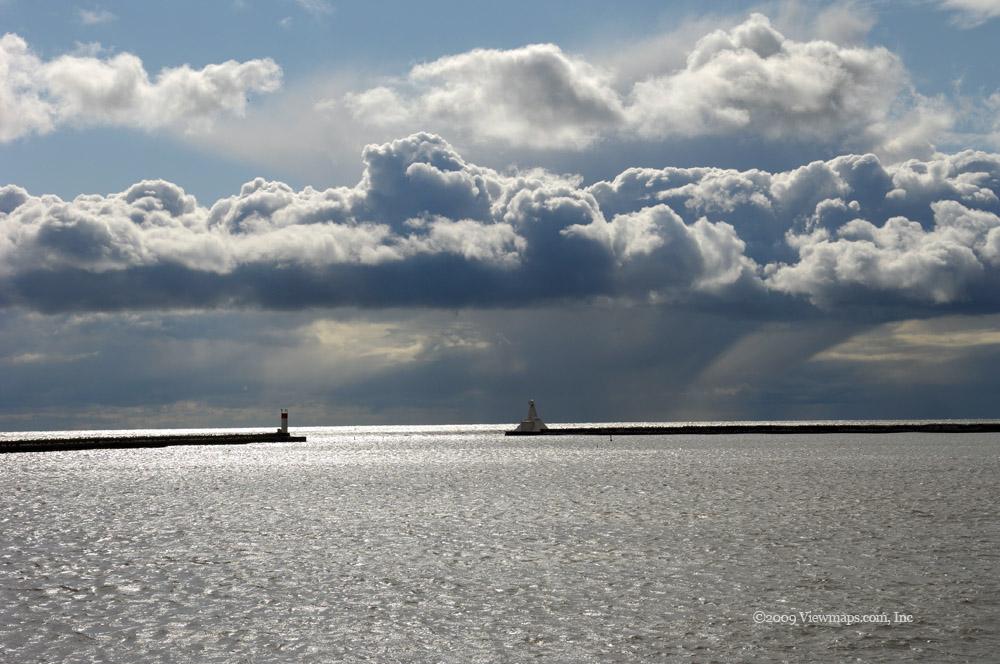 Our stay at the port was drawing to a close and today would be my last chance to explore the area for some photos. I had hoped for better weather this year but that was not to be. So as the day seemed not too bad at the moment I decided to head out and see if there were some scenic shots I could discover in the area.
I often looked down the short road the Inn was on towards the lake but hadn't checked it out to see if there were a few spots of interest at the end of the road. Instead of it being a short drive, the area opened up into a hard packed sandy area that was fairly large. I was able to drive a fair ways past the end of the road and came upon some good vantage points of the lake and breakwater. The clouds and rain squalls out over the lake were very pretty and I got a number of lovely shots of the lake setting between brief showers. At least I could jump back in the car to stay dry and wait for the brief shower to pass. The strong contrasts of the bright cloud tops and sun reflection off the lake against the rain and cloud bottoms made for some very inspiring lighting effects.

After exploring the beach area I decided to drive the short distance to Hawk Cliff where I had captured a few images the last time I was out. The area at the cliff edge had a stark feel to it in the wind and squally day. I decided to risk the weather a bit and walked east along the cliff edge to see what sights could be gleaned from the far side of the corn field. The area along the cliff edge seemed well travelled and so I felt fairly comfortable walking along the side of the field. The cliff edge looked surprisingly sharp and not at all smoothed by ages of erosion. I guess the area was undergoing more rapid erosion and the effects of time were not yet present. I wonder how much of the cliff caves in each year.

As I was taking a few shots mid way across the field I was joined by another walker who was out hoping to see some of the hawks the area is named for. We didn't see any while I was there but I did have a nice chat with him. He was out exploring the area with his father and would try again earlier in the day. He also loved taking photos but preferred wildlife to straight landscape.

I reached the far side of the first field and saw that the path continued further so I decided to walk along the edge of the next field to an area which opened up more and jutted out into the lake a bit. I was hopeful it would give me a better vantage point to look back towards the port for some photos. My hopes were fulfilled and I was able to see back to Port Stanley and get some telephoto images of the shoreline. The fields may have been harvested but they still had an attractive texture to them in the remaining stubble. The groves of trees lining the edges of the fields were full of colour which made for a very beautiful location to enjoy.

The trail kept going but it started to drop down to a huge storage tank at lake level and so I decided I would turn back as I really wasn't in the mood for having to climb back up to the cliff top. Soon after I started back a rain squall caught up with me and pelted me with some good hard rain for a few minutes. I was able to take a bit of cover under a tree with a few remaining leaves till the rain stopped, which fortunately didn't last long. I grabbed a few more shots along the shoreline back towards Port Stanley and then set off back to the car. I spotted a few more angles of interest of the trees lining the field and took the time to capture them but as the weather was worsening I was moving much faster than on my way out. When back to the car I noticed that the sun was playing on the trees lining the road and so I was able to capture a number of interesting images looking down Hawk's Cliff road. Soon I was driving back to the Inn as the rain started more seriously. The day was short but the weather had gotten worse and the lighting was now quite dull. So the brief outing happened just at the right moment for the day and I did get a number of decent shots from the area after all.

I do like the region, its beauty seems a bit more hidden and harder to find than in St. Jacobs but it is here and is just as compelling once found. I plan to come back another time and explore the region again, hopefully with better weather so I can get out for longer treks in the countryside.