I always enjoy the views from the cliffs overlooking Lake Erie, the subtle colours are amazing. 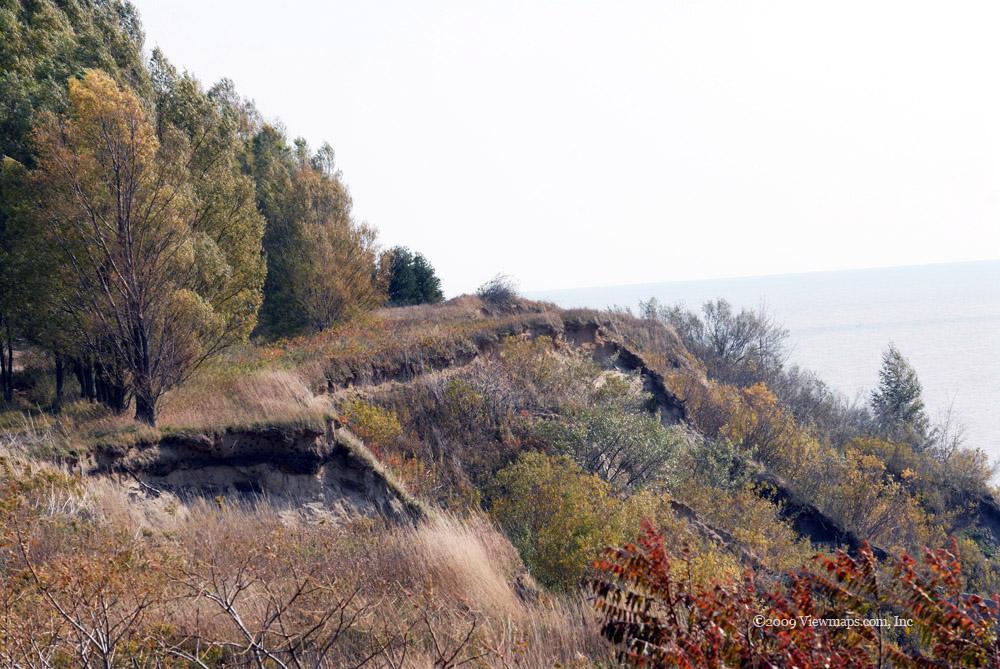 I have visited these cliffs on all of my previous trips to Port Stanley. There is something subtle yet powerful standing on the cliff edge watching the waves break on the beach far below. The place always seems to be windy, keeping the waves aggressively breaking on the beach below. The sandy cliffs are slowly eroding, depositing silt in the lake water below which is coloured gray with sand. As I watch the waves pull back from the beach, the thin layer of water glistens in hundreds of shades of blue-grey. It is really an amazing sight. The sound of the waves alone is a soul refreshing experience but adding the view, multiples the effect the area has on ones spirit.

Though the weather wasn't the best, I had been cooped up a few days and just had to sneak out in the brief break between the storm fronts. Today Carolyn joined me for the short trip to Hawks Cliff. On arrival at the cliff, I noticed that this year the corn field was yet to be harvested and the tall stalks blocked my view of the distant trees. So I concentrated more on the eroding cliffs and the waves breaking on the rocks below. The wind is continuous here and always seems to have a bit of the grit from the shore carried along in it. It doesn't take long before one is tasting the grit and wiping sand from ones face.

The leaves seemed a bit dull up here this morning, possibly due to the mostly overcast skies but I still was able to find a few spots where I had a clear view of some stands of colour that were quite spectacular, this time on the west side of the road. I walked along the cliff only a short way today as Carolyn was with me and I didn't want to ignore her for long. She doesn't often travel with me when I go out taking photos so it was a special treat having her with me. She found the hundreds of bird nests dug into the side of the cliff quite interesting unfortunately neither of us saw any birds using them - probably hiding out of the wind.

After I had taken a number of photos with my regular zoom lens, I needed to change to my long lens but changing them at the bluff would have damaged my camera due to the grit. So I had to pack up and trek back to the car to change lenses and then return to the cliff edge to take the shots. It was disruptive of my concentration but necessary. Sometimes technology must be babied to keep it safe. Once I had collected a number of telephoto shots I returned to the road and found the stand of colour across a field to the west of the road. I had been a bit disappointed up to this point in the lack of colour, but here I found it and this field had been harvested so I had a good view of the trees.

As I completed the shots across the field another photographer drove up and parked. He shot wildlife and had some gorgeous long lenses and heavy tripods. He hauled them out and walked to the cliff face where he set up to capture some birds. He said that a group of hawks were just down the shore and slowly making their way this way. So he was getting ready for their arrival. By now the day had gotten a bit duller and we had seen enough of the cliff so we returned to the main road. I had hoped to stop at a few more sites but the day had deteriorated enough to make me want to get back to my warm room at the inn, so we set off back there and spent the rest of the day relaxing with a nice book.