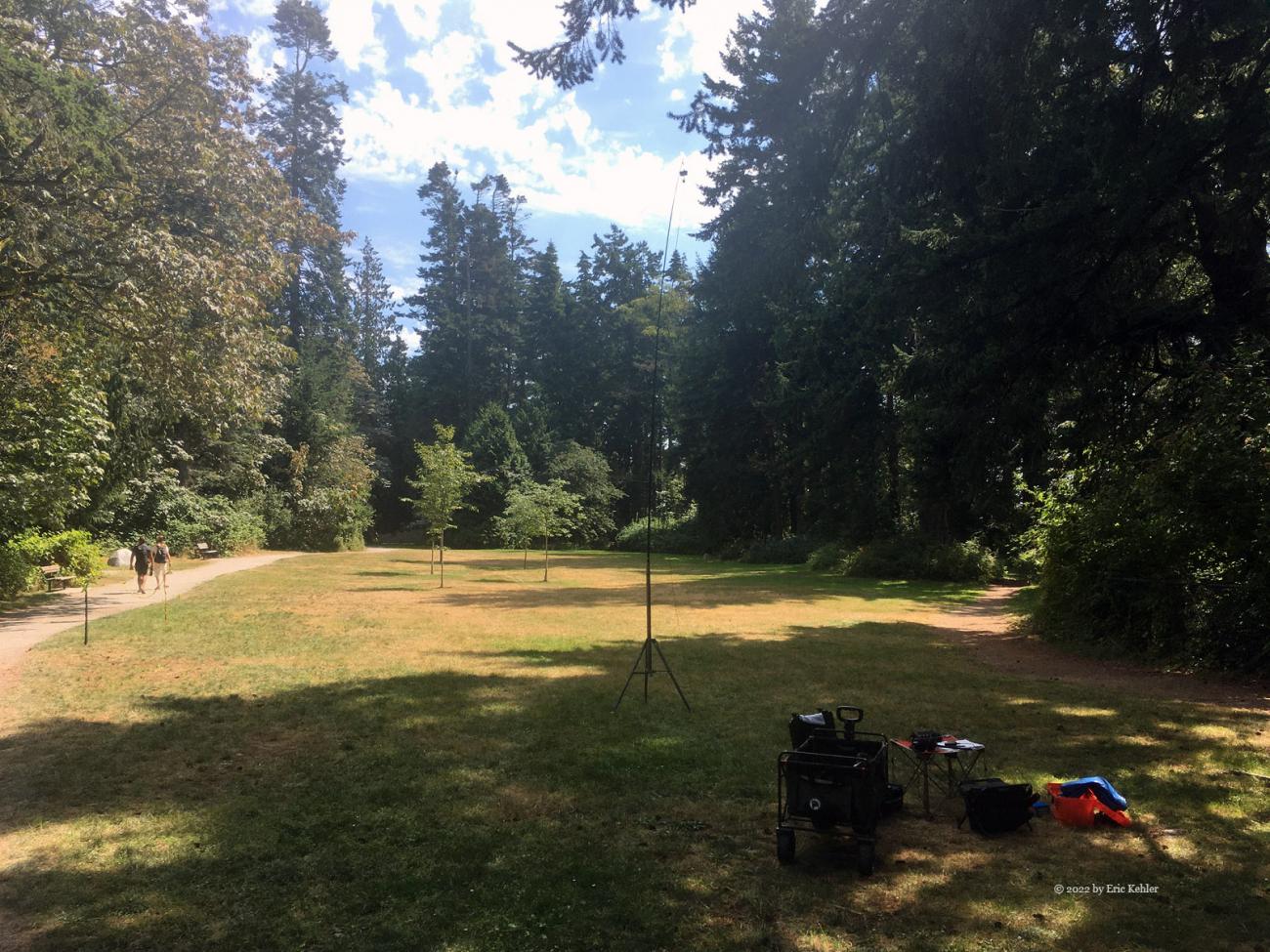 Kwomais Point is a location with incredible views of Boundary Bay, Point Roberts, the San Juans and even the Gulf Islands. Prior to being a park, it was a United Church Campsite with summer camping events. Now that it is a public park, the city improved the area for walking and added a lovely viewpoint area where one can enjoy the sunsets over the ocean. Though only 16 acres in size it is a popular park with lots to offer those visiting it.

The park was a missing item on the parks-on-the air list and as it was one both Ralph and I enjoyed visiting and have even done some radio outings in previously. Being a nice place to visit, we purposed to find out how to get it on the list. After successfully getting Blackie Spit listed, we received more specific instructions on how to add another park. So, Ralph filled out the needed information and sent off the request we then waited. It took a couple of months but this week it finally appeared.

With the park now on the list, we set off for the park on Friday to complete an activation on it. Ralph had gone the night before to try some lower band contacts and managed four. Today, being before 5pm was still the same day in UTC time so those contacts and any new ones he got today would count as a single day’s activity. I picked up Ralph at his home this time as he was on the way to the park from my place. We arrived a bit before 1pm and we collected our gear and set off to different areas. Ralph stayed close to the parking lot as there is a grassy area on its north side. I followed the main path to the viewpoint.

I found a nice shaded area at the west end of a grassy area. It was an ideal place to set up and operate from. The grass in front offered ample space for the antenna and a tree behind provided shade in the hot sun. It was a nice location, near enough to the main path that people could ask about my adventure while walking. I soon had the antenna up and the radio operating. Before my first call a walker stopped to ask about my activity, I explained what it was about and she thought that was quite cool, she said she would check back on her return.

I started off by checking the spots and trying a few park activators. Though I could hear a few none could hear me, most of the listed sites I couldn’t even hear.  I found an empty frequency and started calling, I soon had my first contact in the log, a station in Nevada. It took 20 minutes of calling to get my second – from a chap in Ontario. He sent me an e-mail later and I learned that he was one of the founding members of the POTA program. A couple minutes more and I had a Texas station followed by another. After this I had to switch frequencies due to a new station coming online near mine. Ten minutes more and another park activator got through, so I now had 5 contacts with one park-to-park. It took thirty minutes of calling and another frequency change to get the 6th in the log. Fortunately, a few more followed in quick succession. For my 9th, I had a call from a chap working out of two parks along with a companion with him giving me a second contact in both parks. I had reached the 10 contacts I needed but I wanted at least one more.

I kept calling for another 15 minutes before that eleventh contact came but I now was done. I had talked with R00alph over our handhelds, he also had a tough go and only made one more contact this afternoon than me. But he had packed up and so as I had enough I also shutdown the station. Packing up went quickly and I was just finishing as Ralph arrived. We walked back to the car and set off for home. I suspect that we will both be back here on a regular basis as it is a nice close location for us to operate out of.