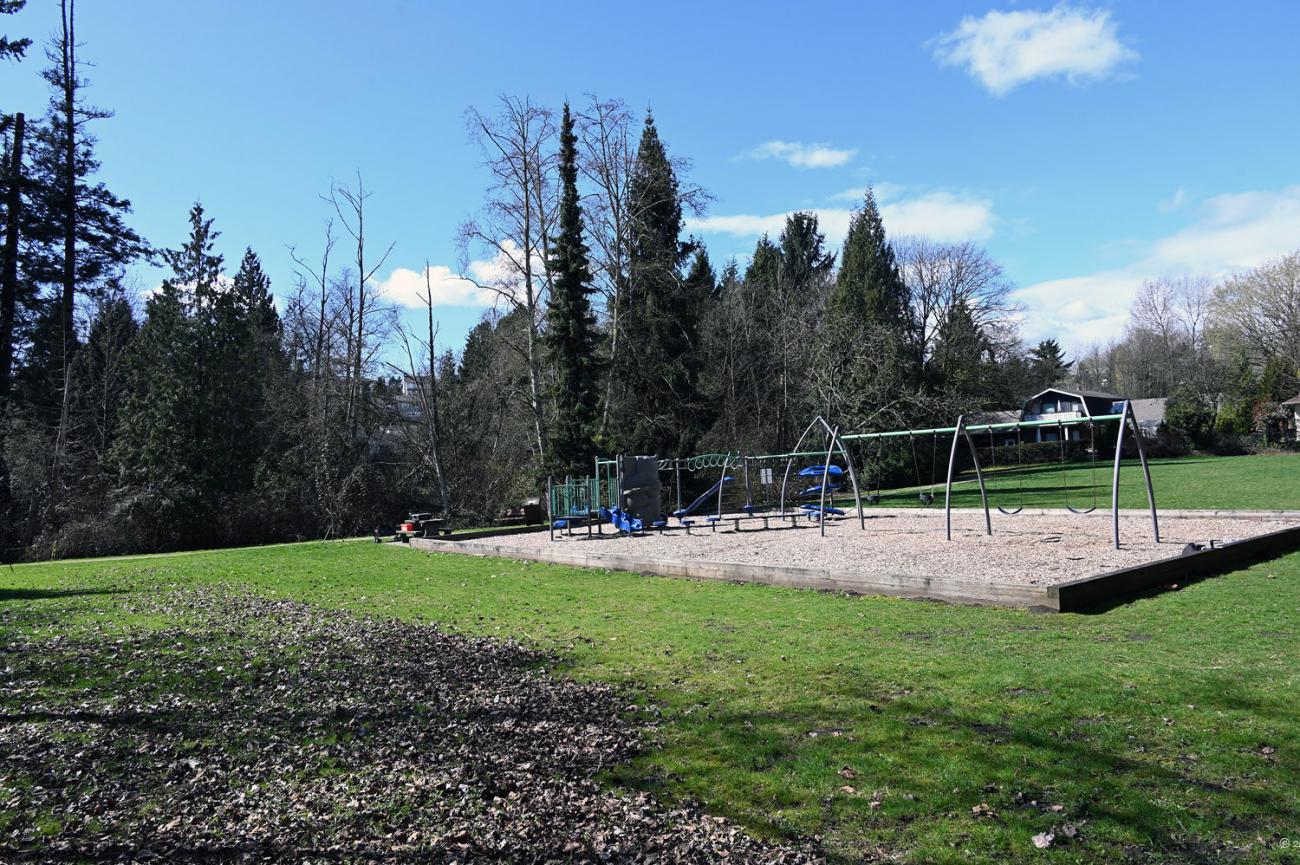 This little 7-acre park used to be the Kroeker home, in the 1980’s they donated the land to the city to be used as a community park. It also houses a patch of wetlands with a little creek which has trout and Salmon spawning in it. I spent part of the afternoon visiting the area and working my radio.

I have been actively seeking out parks on the Parks-on-the-air list which have not yet had their first activation. This little park had been listed for some time but was still not activated. I had spotted this one a couple weeks back and was looking forward to a good day when I could drive to it and see what could be done. I hoped no one else would do it in the meantime though I thought it unlikely as it has been skipped this long. So, on the last day of March 2022 the weather looked reasonable and as my planned adventure with Ralph was cancelled as he developed a sore throat, it was my chance to go.

I loaded up the car and set the navigation system to drive to the park and then I started out at about 12:30 having finished off a quick lunch. The traffic was light and I made good time to the park entrance. I parked alongside the road and walked to the gate across the old driveway into the park. It looked like a bit of a walk so I decided to return and load up my cart and then walk in only the once. After loading the cart and gathering a few photos, I actually remembered my camera today, I wandered in along the driveway and then a path to the open field area of the park.

The main eastern side is a wide-open field with a children’s play area in its midst. Next to the play area is a single picnic table so I made for that and as I was the only one here, I placed my gear on it. Then I wandered around a bit more looking at the sights. There was a sign reminding people to protect the small creek as it had salmon in it. The path continued over a foot bridge crossing the stream to a western area where I noticed a number of trees that had been chopped down. The path continued to the highway on the south but I returned to the table to set up my equipment.

As I started to pull out my stuff a grandmother with young child came by. We chatted for a few minutes about the radio and grand-parenting. I then finished the set up and I dialed in 15m there were a few stations but the band was full of S5+ noise. So, it was going to be a bit of a challenge getting the contacts in the log. I selected a frequency and then spotted myself. I had a slow go of it and was beginning to wonder of I would made the needed 10 contacts. I managed 5 contacts on 15m – Ohio, New Hampshire, Ontario and California. I was getting out but the operators were all saying that the band was not doing well today. Therefore, I decided to move to 20m.

On 20m there were more stations but my noise was just as bad if not a bit worse. After I spotted myself on the list, I got a strong call from AL7KC in Alaska. He sounded good and I was hopeful I would get the needed number. This time I was logging about one station a minute and soon I had the needed 10. I continued on another 10 minutes putting 6 more on the log. It was a challenge hearing the stations through the QRN. I found that with the preamp on the signals were louder but the noise even more so. Turning off the preamp reduced both but the signals were more readable. I will have to try this at the next park to see which is better for a given QSO.

Well, I had more than enough and though it was a pleasant spot the road noise from the highway a few hundred feet to the south was quite bothersome. I shut off the radio and wandered the site again gathering some more photos. A group of three had come by and were playing ball in the open area, a few people had walked the path way while I was there but generally the park was empty. Perhaps busier in the summer and on week-ends. I finished stowing my gear and made for the car. I enjoyed the spot and the contacts having worked a number of my regulars. It was still a bit before rush-hour so I didn’t want to dawdle too long lest I get stuck in a highway parking lot. So, I made for the highway and though I did have some delays on highway 15 near Fraser Highway, the drive home went OK. Now to locate the next un-activated park. There seem to be a few more in Port Coquitlam.