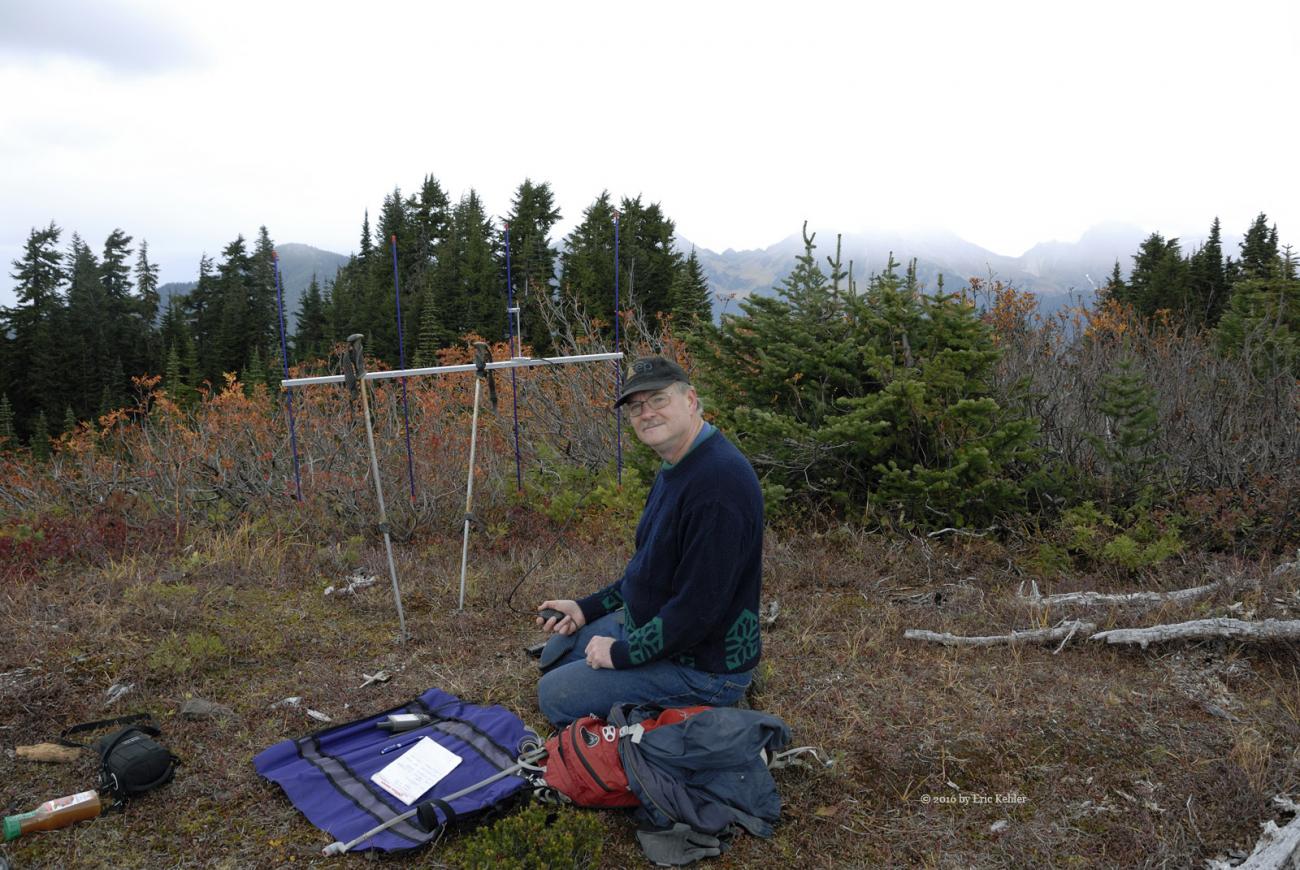 Putting Mt. Mercer in perspective as compared to my other hikes, it is one of the easiest. That said, the drive up the old Thurston FSR was more difficult than I expected. Getting back to the start. I was planning for my 11th summit hike this year and I wanted to do a first time SOTA activation of a local peak. Originally I was looking at Mt Laughington but the weather was questionable and I didn’t want to get caught out in a heavy shower. So our fallback was Mt. Mercer which was much shorter.

Our day began at the decent hour of 8:30 when Geoff arrived with his two boys. We packed up the truck and set out for the regular pre-hike stops. Then on to the Chilliwack River Road. We had a brief delay on the road due to a major paving project. It was looking good, the road will be quite nice once complete. Once past the paving we made quick time to the start of the Chipmunk FSR and turned off the pavement. The initial drive along the bench road went quickly though the potholes were quite brutal in a few places.  Soon we were starting up the Thurston FSR for the ridge far above us.

The initial section of the road isn’t too bad. It gains elevation at a decent rate but not overly fast. This lower section is fairly well travelled as there are a number of side roads to viewpoints that seem quite popular. But then one enters the steep section of the road. It also is much narrower and the cross-ditches much deeper. The drop off from the side of the road is also fairly significant. Soon we reached the place where we had to stop back in 2008 and continue up the road in our snow shoes. Today the road was clear but just as steep. As we reached the end of the section we snowshoed we encountered a deep ditch that gave us some trouble. We just couldn’t get traction to climb back out of it. Eventually we had no choice but to get out the winch. We tied off on a tree and pulled the truck across. Not overly difficult but our batteries are getting weak so it was a bit uncertain as to whether they had it in them. Fortunately they did and we continued to the next ditch.

This ditch also stopped us but we backed up and gave it a go with some momentum and made it across. The rest of the way to the ridge was easy and as we were almost there it went very quickly. Once on the ridge we noticed a road heading along the ridge towards the summit so we started up it. It got us about 150m closer to our goal before the road narrowed to a dirt bike route. We parked the truck and geared up for the hike. The weather was holding though we did feel the odd drop. I was not wanting to drag it out too long so we set off quickly and were soon making our way along the bike route.

The trail was easy to travel and though very steep in a few places, we made great time to the summit and once there we spotted a repeater shack! It was a solar powered unit for Search and Rescue with a big sign saying don’t damage it you may need it one day. The area around it was broad and flat so I had ample area to spread out and set up my 2m yagi. The rain had held off so far but one never knows where a shower cloud is lurking. I had myself on the air very quickly and immediately received a response from a ham in Port Angeles and then a second at the Victoria Airport. My third was from a chap in Nanaimo! I love the distance you can get with a small hand-held – that was 170kms! Radio really is amazing. I put a couple more contacts in the log and then stopped to eat a few nibbles before tearing down. Now I could relax and look around, the autumn colours were in full force on the blueberry bushes and the slopes looked amazing. I gathered a number of photos but Geoff was getting chilled so we quickly packed up and started back down the path to the truck. It was only about 900m each way. It is definitely worth another go but I need a smaller vehicle to drive the road in.

Once back at the truck we hauled out our stoves and heated some soup for lunch, it really is nice in the cold air. The rain was still holding off though we did get hit with a very small short shower. Once finished eating we started down the road. With gravity with us we managed to cross both ditches without difficulty though we still had to preplan our route. As we reached the gentler section of the road, Geoff started into a switchback and didn’t see a cross-ditch which sent us into the roof of the cab as the truck dropped into it. I had forgotten to remove my cap so I ended up with a nice hole in my scalp once again!

Done with Mercer I wanted to check out the road to Mt. Laughington. We confirmed that the gate is no longer an issue, it couldn’t be locked even if one wanted to lock it. The initial road is steep and quite eroded with runoff. But once past the initial section the road continues up the slope in a narrow opening between the encroaching Alder. We soon came across an old pickup that has slid into a crossing stream that had dug a deep rut across the road. At first I thought it was blocking our way but fortunately the area behind the truck was wide enough for us to pass.

We continued up for a few kilometers and soon came by two parked SUV’s and beside them was a marker designating the start of the trail to Baby Munday Peak. This trail was in the news earlier this year as an experienced hiker had gone missing on his way down from the summit and even after extensive searching for him he was not located! Geoff also spotted a Grouse so he set off after it with his rifle. He didn’t find it again so he soon returned to the truck. Continuing up the road, it was now even more overgrown and we had to pick our way carefully through the trees. I eventually found the fork where we will need to park to start the hikethe the summit of Laughington. So our scouting was complete and we turned around and made for the pavement far below. The drive down was fine and we were soon back on the bottom road in traffic! Fortunately they let us pass and we made good time to the Chilliwack River Road. The drive home started well but it wasn’t too long before we were hit with a heavy shower! The rain held off just long enough for our adventure!