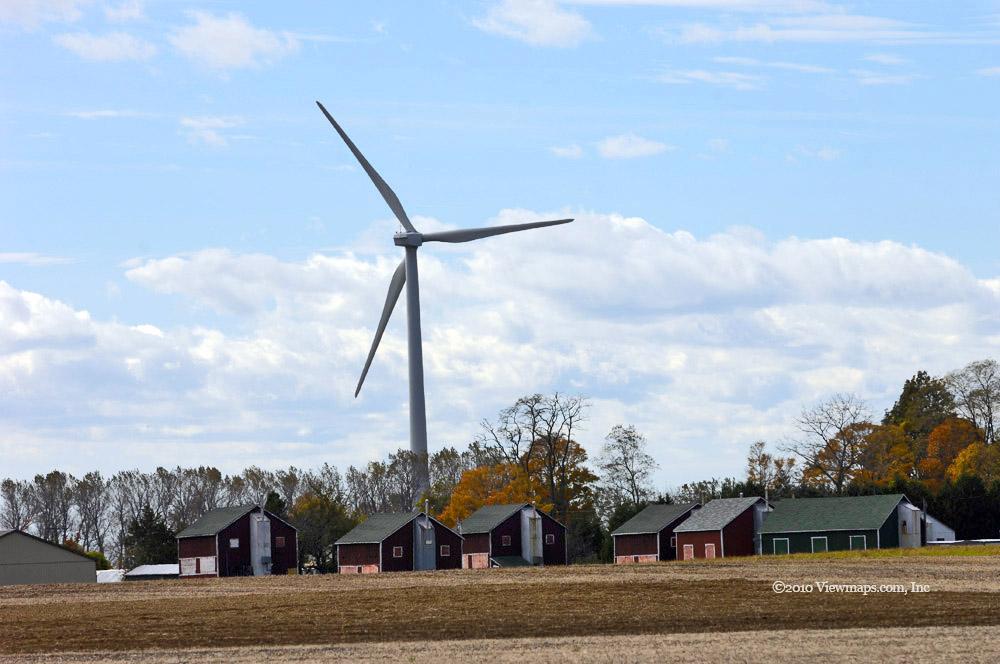 I had traveled to the west along the lake for most of my excursions out of Port Stanley so today for something a bit different I decided to head for Port Burwell and the wind farm that surrounds it. My first stop was Port Bruce and its beach area. I drove the highway to Port Bruce seeing only a few clumps of coloured trees but nothing that grabbed me enough to stop and shoot it. So I arrived at the beach with minimal delay. The wind was up and the beach deserted so it looked like there might be some decent opportunities to photograph.

I wandered across the wide sand section towards the lake and started gathering a few shots of the waves breaking against the shore. There I spotted a log not far away that would make an interesting prop with the breaking waves behind so I walked over and took a number of photos from various angles. I then saw another log and repeated the process. After capturing a number of photos I returned to the car where I spotted a few images of some trees. I made my way to the eastern edge of the port and looked east along the coast to Port Burwelll and saw some of the wind turbines in the distance. They were enticing but I wanted to explore some back roads around Port Bruce before I set off for them.

I drove inland a bit and found the street – Rush Creek Lane – which looked like it might offer some views. I soon found some decent colours to photograph including a single lane bridge. The bridge wasn’t all that spectacular but it did get me out of the car and started on some non-lake shooting. Soon I was stopping at various spots along the road capturing the nuances of the coloured trees. I drove a few of the roads through here – crossing back over the one-lane bridge a second time as I started for Burwell. There were some remarkable combinations of trees along this stretch of road.

Soon I was on the highway heading for Burwell and approaching the first of the wind turbines. They really are huge and stand out from miles back as they dwarf the buildings that surround them. I finally arrived at Burwell but decided to skip the port and just keep heading east along the wind farm. I passed the main control centre for it and soon was in the thickest section of the turbines. When you got out of the car near one you could hear the wind swishing around the blades as they rotated; it was surprisingly loud. I was trying to find some shots that captured the size of these towers but nothing was really doing what I wanted. Eventually I got back on the lakeshore road and reached a closed section of the road but there I noticed a cemetery and decided to gather a few photos in it.

The cemetery had some stones dating to the first decade of the 1800’s which were still legible. So I had a number of interesting photos. It was while I was taking one of those shots that I had a distant turbine in the frame. I thought it gave a new perspective of ancient on modern and so I gathered a number of additional shots combining the old and new. The cemetery was in a nice location – just back from the ridge over-looking the lake and beside a huge orchard.

Once done with e cemetery I decided to look for a turbine close to the road where I could take a photo with me next to the tower. I soon found a convenient tower and set up the camera to capture me next to the base, It really showed the immensity of the structure. At this point I decided to start my way home and so turned back along a street parallel to the Lakeshore road. Here I was able to capture more shots of trees with the turbines and other autumn colour images. It was an interesting section to drive along. I even spotted a building that was well on its way to collapsing that offered an interesting image. Once I had made my way back to Burwell I spotted another cemetery that looked like it might have some older stones and so I stopped to gather a few more images of headstones.

I then got back on the highway and made for Port Burwell. I continued past the town proper and turned on a side street that ran parallel to the harbor where I was able to gather a few shots of the harbor and some of the distant wind farm. I next stopped at the interpretive centre for the wind farm which I found interesting. As it was getting later and I was getting tired I decided at this point to head straight back to Port Stanley.

At the harbour I decided to take one more short drive out to the end of the road where I could gather some images looking down the coast and of the breakwater protecting the harbor. The wind was still strong and so the water had a lovely character to it for some last photos. Once done here I returned to the main road and drove the short distance back to the Inn. So though the drive started out a bit slow I eventually gathered a good number of photos of a wide variety of subjects – another good day for photography.