Sumas in the Fog 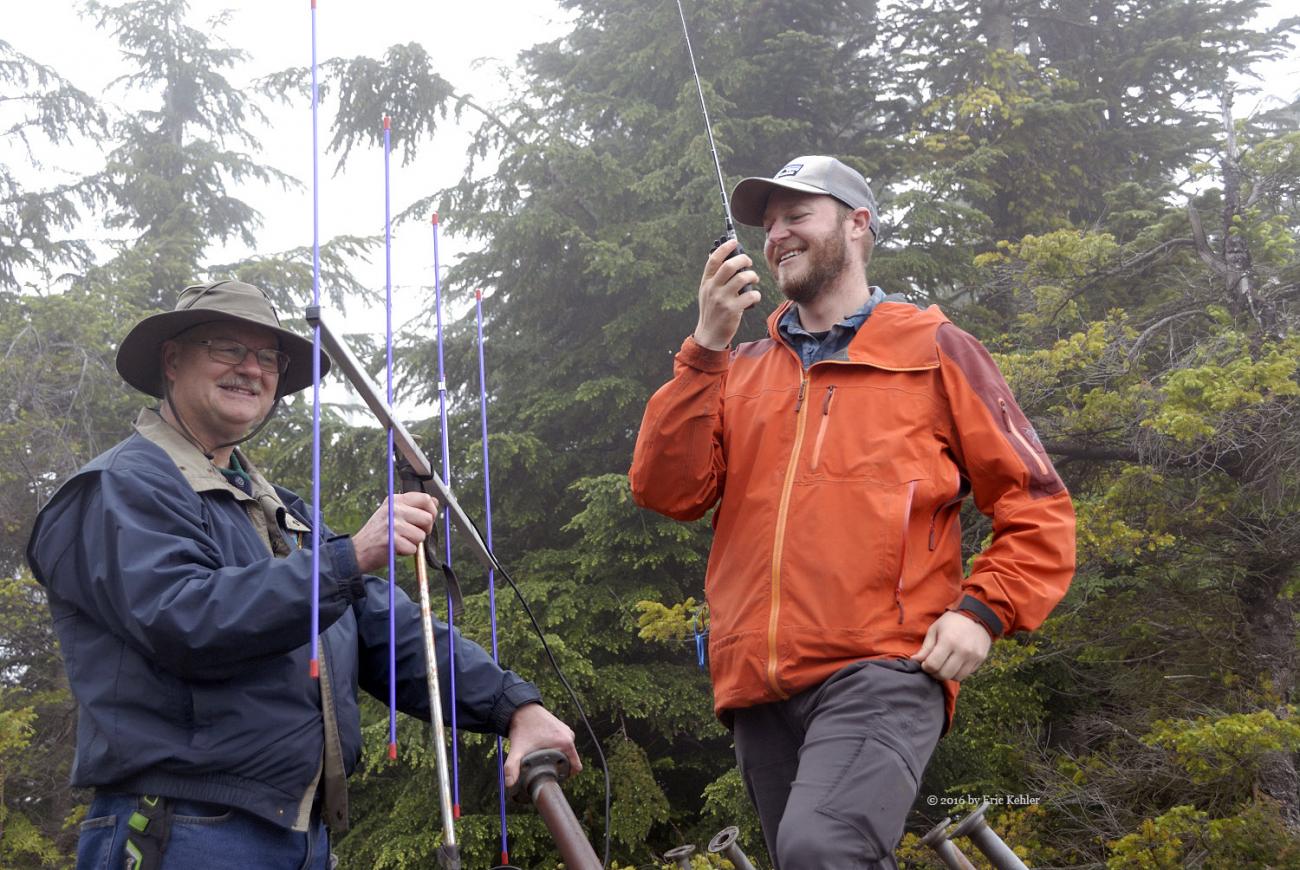 Good conversation and making new friends adds so much to a hike that is for the most part along a road and in the fog. Ralph and I had planned to do another summits-on-the-air (sota) activation but we were watching the weather as we really aren’t hard-core hikers that go out in any weather. The day looked like it would be clearing and so we planned to start a bit later to try and avoid the worst of the weather and at home in White Rock it wasn’t that bad as we packed up. Today we were being joined by a fellow ham and Sota hiker, John, he is a hard-core hiker and rock climber so our simple walk to Sumas Peak wasn’t even a walk in the park for him.

We had talked with John briefly two weeks earlier as we returned from our Mt. Lincoln hike. We knew him from the Sota organization but had never met until this morning. So this would be an added bonus for our adventure. John arrived a bit after our target departure time, he was coming from Vancouver and got a bit delayed en-route. But soon we were off to our coffee and fuel stops before the easy drive to Sumas Mountain and the logging road.  As we climbed the center area of the mountain the weather worsened and soon we were covered in cloud and a constant fine drizzle. This continued through our drive and while we geared up and started out.

The walk up the road went quite quickly as we were quite engaged in hearing about some of the exciting hikes John had recently completed. They were beyond Ralph and my abilities but at least we can dream and enjoy the thoughts of the hike. The coolness of the day made for a better time as we didn’t need to stop and rest as often. Soon we reached a small side trail that we skipped on the way up last trip. We confirmed back then on the way down that it would skip past the towers and so today we followed it and soon were at the east lookout enjoying a sheet of cloud and absolutely no view. There was a group of 10 already on the spot resting and chatting. They became very interested in our activities as we started setting up our radio gear.

Ralph was the first to start his deployment, he tossed his rope and weight into the tree which he used last time and after a few attempts got it over the desired branch. Unfortunately it got snagged and wouldn’t drop or come back. John quickly took advantage of the situation to put his climbing skills into action and he was up the tree in short order freeing the line and securing it over the branch. Ralph then finished setting up and started putting out a few calls. I started setting up my two meter yagi and soon Ralph was asking if I wanted his amplifier, I went to get it and realized I had forgotten the connecting wire, fortunately Ralph had his and all was good for a minute more before I realized I had also forgotten my radio! Now this was the first time that had happened. John to the rescue again as he did have his and so I hooked up his radio and I was making calls.

I eventually got my first couple in hand and started trying for the third. Ralph, who of course was sending Morse Code on the 20 meter band, reported that he had completed a contact with a New Mexico station and another in Quebec – show-off. He went on to complete 10 while I struggled to get two more. Meanwhile John set up his HF antenna and tried to make some phone contacts but it just wasn’t happening. Ralph tried his antenna later and it seemed fine but John’s radio didn’t want to be heard. Eventually he took back his handheld and my beam and made some two meter contacts. He was able to complete the requisite four after some time of trying to coax out some local hams. So all three of us completed an activation. While on the summit the first group departed and a second group of 8 came up. They also were curious about our activities and were quite amazed at Ralph reaching Quebec with his little set up.

Done with radio we started back down the slope, the fog had lifted a bit, still no view but the drizzle had abated so the walk back was a bit drier. Soon we were back to the truck and ready to settle in for a rest as I drove home. It was a successful day and I enjoyed being out on the slope in nature and meeting a new friend. Hopefully we can do some more activations in the months ahead.