After 50 years, I finally hike the summit of Sumas
Category
Serendipitous Discoveries
Summits on the Air
2015 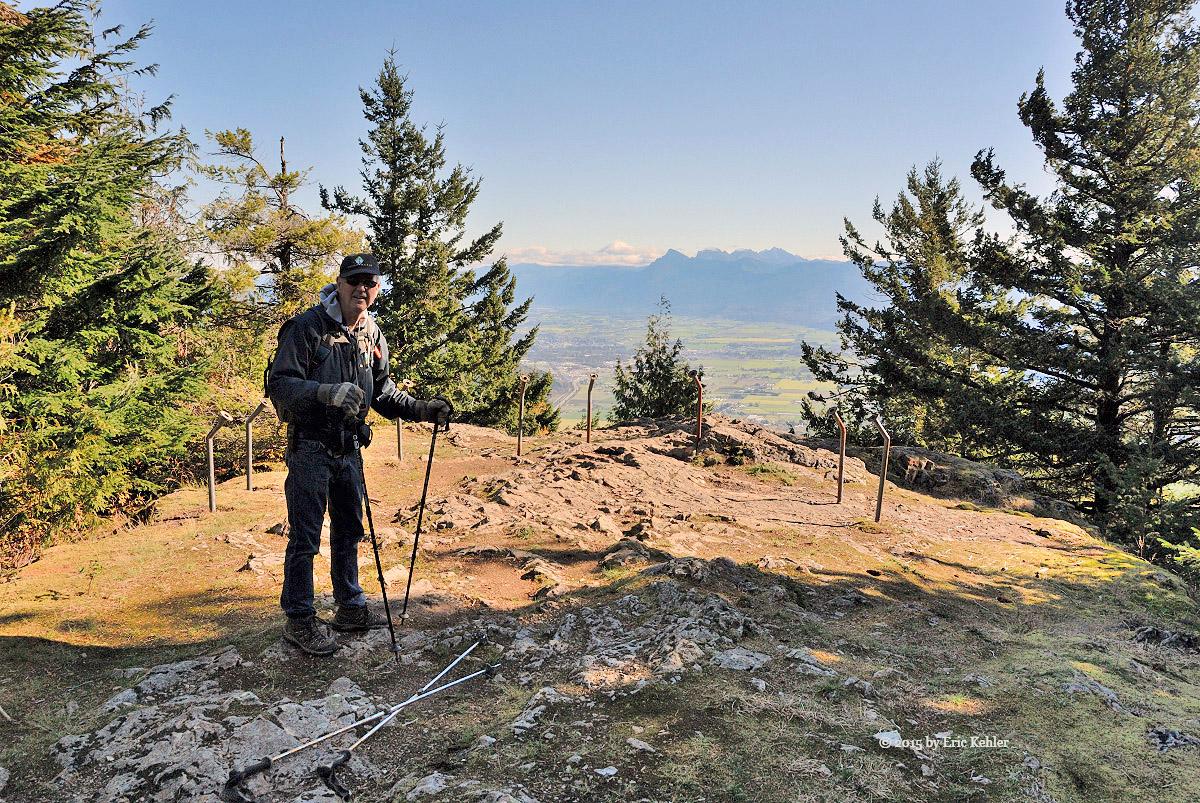 I have driven past Sumas Mountain more times than any other summit yet I have never been to its summit. I tried once a few years back but it was a winter when we actually had some snow and the road was gated near the start so I didn’t get in. Though not a challenging adventure, the hike is still around 3km along the upper section of a service road. Last year we added the summit to the list for the Summits-on-the-air (SOTA) program so we now had more motivation to hike the peak.

Over the last few years I have developed a pattern of hiking the tougher summits with Geoff and the easier trail or short off-trail hikes with my friends from the radio club. Today’s hike was one of the latter as Ralph and I wanted to do another SOTA hike in October before I left for Ontario and Sumas fit the bill nicely. The weather looked good and we were hopeful it would last until Saturday so we scheduled our lives to fit the adventure in and were looking forward to it for a couple of weeks.

The morning of our trek arrived with fog but a promise of sunshine before too much of the day slipped by so we set out for coffee, gas and the mountain. We found the drive to the start of the service road went very quickly and trouble free. The initial section of the service road was quite a washboard and we got a good shake to start the backcountry section of the travel. Fortunately it cleared up and we were left with scattered potholes for the balance of the drive. There were a few vehicles on the road and lots of cyclists making their way up the road. It looks to be a very popular destination for those wanting a moderate backcountry cycling experience. There are a number of trails throughout which also make for good hiking and cycling.

We eventually arrived at the upper parking lot which already had a number of cars in it. The view from here looked good but we kept going and made our way another kilometer along the road to the upper gate which was as expected, locked. Here we parked the truck alongside the road and got our gear ready for the strenuous part of the day – the uphill hike. Now the annoying thing with starting out on one’s uphill hike is when the trail starts going down rather than up. Not only are we losing ground we drove up to avoid doing by foot but on the way back when we are tired out it will be uphill. Unfortunately the road did indeed drop down for a short ways before rounding a corner and resuming a uphill direction.

The hike up the road was actually fairly easy though it still needed effort and the views though limited to the immediate forest were still interesting. We both enjoyed this section of the hike. Soon we had reached the large repeater station just back from the summit and we stopped to look it over. The towers were not overly tall but were extremely broad and stable. The main tower had a large number of antennas on it. We checked our GPS to find the direction of the summit and set off into the bush to find it. Soon I spotted a well-trod trail leading in the general direction so I started along it and we were soon greeted with a viewpoint and the actual summit.

It felt good arriving ahead of schedule and now we could set up. The one problem we encountered was the high winds. The forecast had warned of a windy afternoon and up here on the summit nature took it to heart and it was very windy which made it somewhat colder than it should have been. At the summit I noticed a number of pipes protruding from the rock and they looked ideal to lash my walking stick to for a mast for my yagi antenna. So I got it tied on and soon had my antenna assembled and attached to a post. A few minutes later I was putting out my first calls, meanwhile Ralph was busy stringing his wire antenna into one of the trees and getting his HF operation in order. I soon had my first call, it was from a chap in Washington State, two more followed in quick succession but then I had a gap. I was having trouble keeping the wind from turning my antenna every which direction.

I next tried our White Rock repeater and was able to get into it reasonably well. There I had a return call from Geoff who just happened to be monitoring it at the time. He switched over to simplex and I soon had my fourth contact in the bag. That made it a successful activation of the summit. We chatted for a few minutes and then I stopped to eat some lunch. After a bite I worked a couple more stations. Ralph was able to work 15 on HF, one was on the east coast. He had a good run and felt it went very smoothly. We had both gotten more than the needed number and the wind was chilling us so we decided to pack up and head down.

Despite all the traffic we met on the road we had only one pair come to the summit while we were there. They enjoyed the view, took a photo and left in short order. The hike back down went easily and we chatted with a few of the cyclists making their way up. We never saw any coming down so I wonder where they go for the downward portion. Finally back to the truck, we could take a nice long breather before setting out. We stopped at the upper parking spot to gather a few photos of the valley below. It was quite lovely even though the haze hid all the details from sight. Ralph was able to pick out the White Rock land mass fairly quickly and I was able to snap a photo of that direction. Done with the view we continued down the service road and were soon back to pavement.

We decided to get a coffee before heading home and so we needed to find a route to Abbotsford rather than just head back to the highway. So I took a different route from the one we drove up along and this brought us to some nice fall colours before opening up in the historic town of Clayburn. We had an extra view into the village as the main road was closed to construction and we had to detour through the inner section of it. We got through the town and onto the highway for our final drive to the Starbucks where a parking space opened up for us just as we arrived. All the others were taken. After a quick stop to gather our drugs we set off for home having enjoyed a shorter but lovely day in the hills and sun. 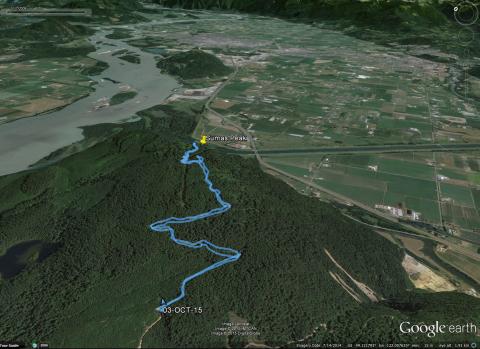