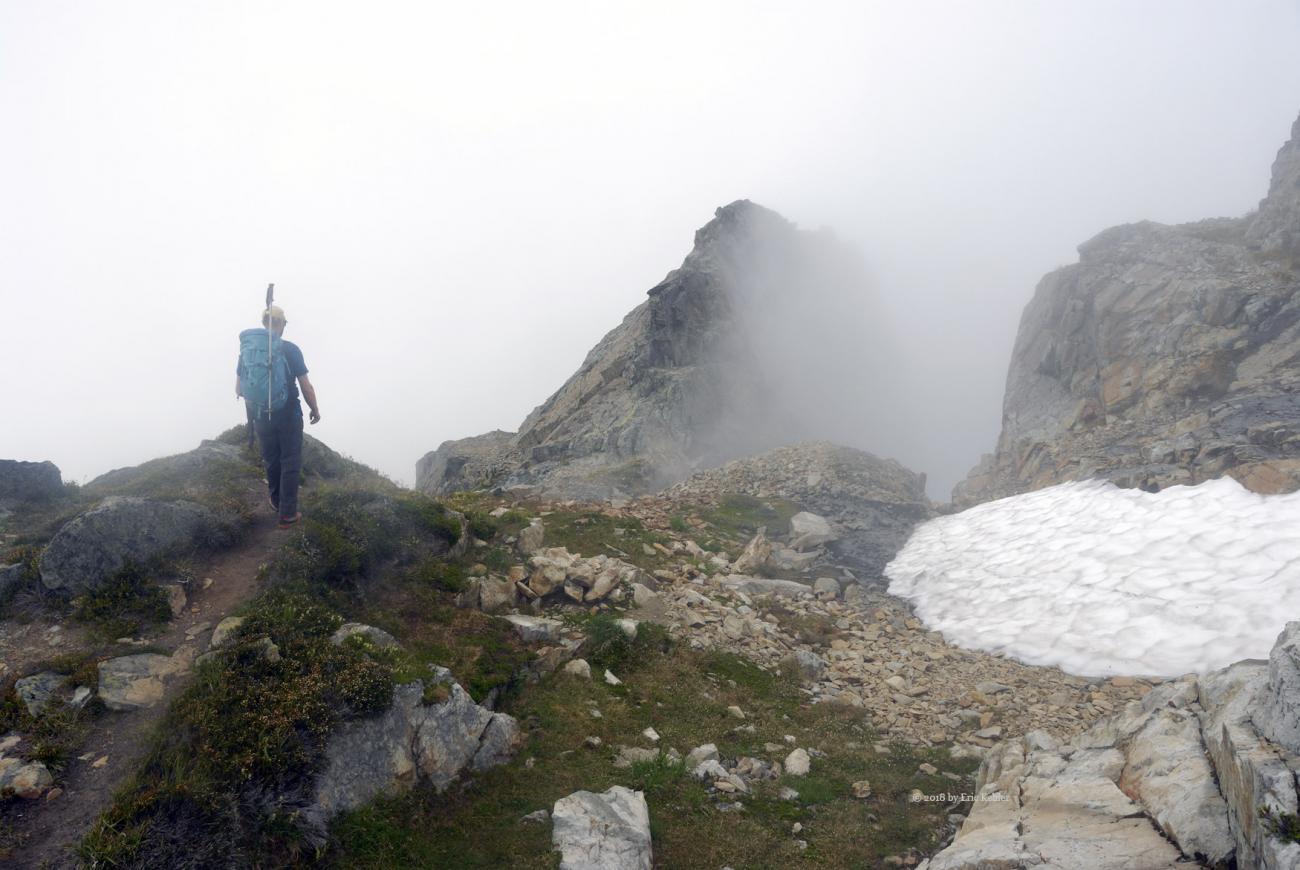 For the past few years I have wanted to return to Lady Peak and to be the first to activate it in the Summits-on-the-air program. I last hiked the mountain back in 2010 and though I got to the top ridge I was a bit shy of the summit. On that hike the clouds were quite thick at the top and it made it look like twilight. Visibility was low enough that the next part of the hike looked like a looming pillar in the dim mists. I was there with another hiker I met on the route and we both felt it was not safe to push further. The location seemed to be at the summit elevation so we felt like we had gotten close enough.  Recently I wanted to retry that section and get to the marked summit location.

So here we are in 2018 and I had the opportunity to do a hike with John Bell who is a professional outdoor guide. He also wanted to activate the peak and so it was an opportunity I couldn’t miss as he was likely the only one I know who would do this hike. We decided to go mid-week as the weather was cooler and the crowds would be absent. The Lady Peak hike shares the initial trail with the Mount Cheam hike and on the week-ends that one may have 200+ people on it. So as we neared the parking area this morning I wondered about how many vehicles would be parked in it,  there was only one jeep! That was so nice compared to last time!

We quickly got our gear organized and started off, the day was forecast to have a chance of rain but as we started out the sky was mostly clear and we had some nice views of the summit. John set a nice pace, fast enough to make decent time but slow enough to not get too tired. This got us moving along at a good pace for me and I think I was going faster along the trail as a result. One hour in we were at the point where the Lady Peak trail leaves the Cheam trail and there we took a few minutes to rest before starting up the steep section ahead.

Now this next section of trail follows a shortcut from the original Lady Peak trail. It is much steeper but saves quite some distance and now shows as the marked route. The trail makes its way up alongside a bare section then turns east to gain a more level section at the base of a steep incline of loose rock. At the top of the rocky section is a 20m cliff face that we must cross to the edge of to continue up. It was around 16 years ago on this very section of rock where I was struggling to climb a few feet at a time that I met a chap sailing down the slope at a fast pace, we chatted and I learned he had started the hike less than 2 hours earlier, I was already well past 2! It was at that spot and moment that I chose to start an exercise program so that I could hike these summits more effectively. Well here I am making good time and barely needing to stop for a rest as I hiked past that spot of 16 years ago!

As we neared the cliff, I mentioned to John that on previous hikes I went to the right, John looked to the left to see if he could spot a trail but none was seen so we crossed the loose rock and started across a snow pack. It was slow going as we had to carefully plant our feet to prevent a slide. We angled down a bit and soon were at its base and making for the far side of green Heather to continue our way up. Following some cairns we soon were above the cliff and on a worn trail heading towards the western ridge above. As we reached the next snow field we stopped to rest a bit and then started up beside the snow. Soon we reached the base of some large rocks, John scouted ahead to find the trail, I mentioned that we stayed below the rocks and bore south before ascending higher. Having viewed the other route he saw that it ended in a drop, so we continued below the rock face and soon were able to start climbing again.

This next section involved steep scrambling over various types of rocks and loose gravel and after a 100+m we reached the upper snow field which was melting and making a stream that flowed down slope. There is a narrow gap just to the north edge of the bottom of the snow field that drops off to the far side of the ridge. Much of the melting water was falling through that gap. With a bit of cloud blowing up through it, it looked very ominous.

At the top of this snow patch the we found the trail that continued to the summit. Up here the far side of the ridge has a deep drop down the north side of the mountain. We hiked just below the ridge continuing towards the summit. It was right around here that I stopped on my previous hike. Fortunately today the clouds were higher than our current elevation and so we had a good view of the rocks and narrow gap that lay before us. The gap was only 2 feet from the sheer drop off the ridge so I was a bit hesitant to continue forward. This location was now within the valid activation zone for SOTA so we could operate here but I really wanted to do better this time. John went on ahead to explore the rest of the upper ridge. He just scrambled up the gap with barely a stop. After a few minutes I decided to edge closer to see how it looked.

The gap actually didn’t look too bad as long as one concentrated on the rocks and not the drop a couple feet to my left. So I started through the gap and soon I was on top of this pillar and looking down on John as he made his way back towards me. He was glad to see that I had given it a go. I continued on and there we found a wider spot to rest and eat lunch. As I settled in I heard a call on the radio from Ralph back at home in White Rock. As we were talking my wife Carolyn joined in and I got them to switch to simplex and soon I had both Carolyn and Ralph in the log book using my simple hand-held with a small whip antenna! The summit was activated!

After lunch I set up my main 2m radio and yagi antenna and John stretched out his HF antenna, he was trying my KX2 radio for this adventure. We both got in the needed number of contacts for the day and then we packed up. Now we were excited that we gained the points for the summit but though the clouds were not overly thick they were below us and so our view consisted only of our ridge and a 100 or so meters below. In other words, no view! It was a good thing we didn’t primarily come for a view. A shame but it isn’t much different than that of Cheam which we have both enjoyed on an earlier hike. Well we started to retrace our steps back down the slope. John picked a few different routes as we descended trying to find an easier path. We made good time and soon were back to the more level section below the upper ridge but above the cliff. Here John found an alternate marked route that lead down the opposite side of that cliff face we had to go around on the way up. This route is shorter and leads through short stubby trees, they provide good grips for lowering oneself down the steep face. Near the bottom we relocated a flagging marker to make it more visible to those ascending. We came out very close to the spot where we decided to turn right when we were on the way up!

Continuing down we made good time down the loose rock and then trough the heather to the point where our trail joins the Cheam trail. We did hear voices from that other party at a few points as we descended this slope but never did we see the people. So we really had the mountain to ourselves. After a short rest we followed the well-travelled trail back down to the bowl and Spoon Lake. As we approached the final section overlooking the lake we saw another larger group gathering next to it. They were on their way up. We finally reached them next to Spoon Lake and they asked about the views, we told them that the clouds were blocking any. But they continued on. It being 4:30 already I questioned the wisdom of them continuing on at this time. Hopefully they didn’t try for the whole distance. We were soon back at the truck and offloading our gear. A long day but rewarding and well worth the effort. Now to face the rough road ahead. I am looking forward to doing another hike like this one with John, he is a fun partner to go with and makes the hike go so smoothly.