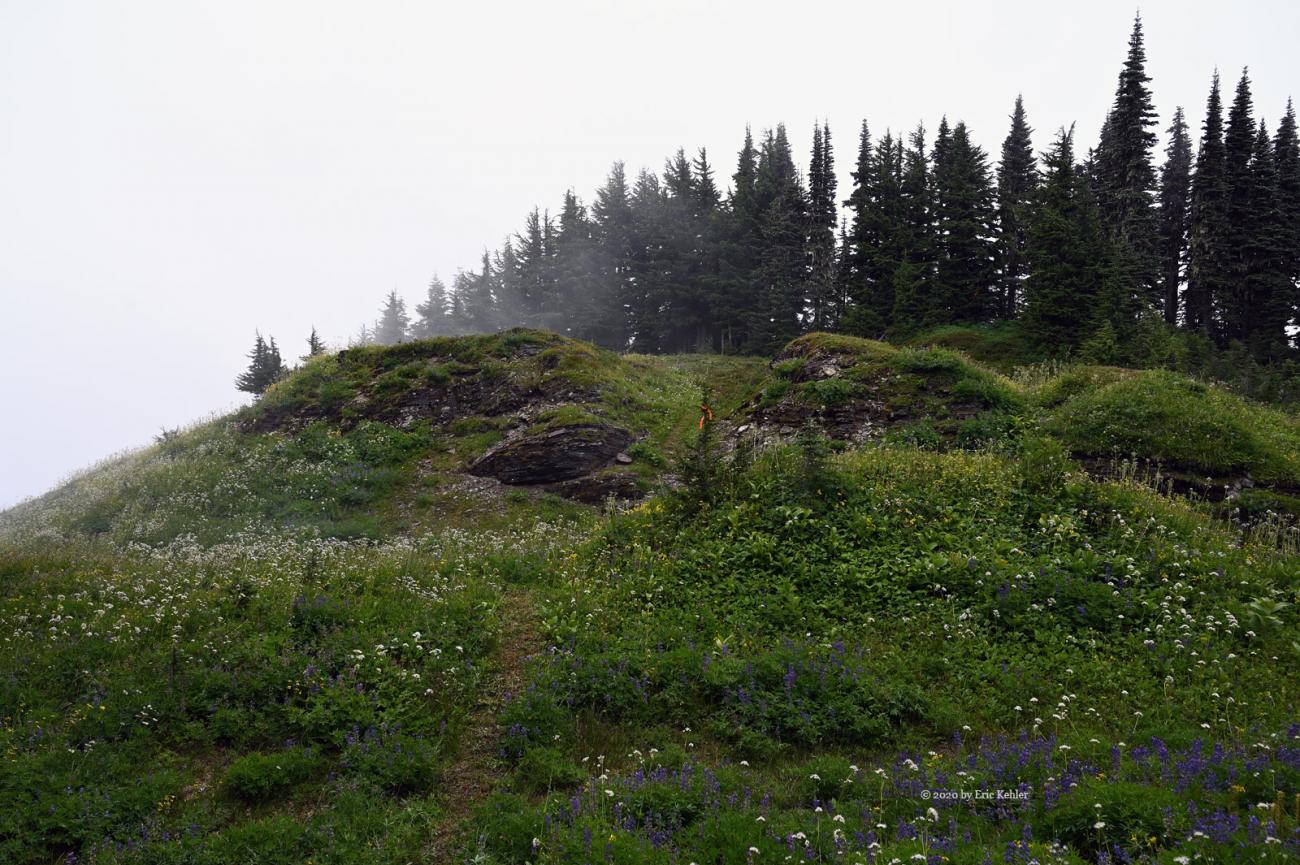 It was last fall when I was first attempting to hike this mountain with John Bell.Back then we could not find any guides with trail information and so we decided we would pick our way forward through the forest and hopefully find the summit. Others had done so, so it should not have been difficult. Unfortunately, on the day we tried it had snowed and there was an inch or so of white stuff at the higher levels. We parked near the Cheam trail parking area and started up the slope. We eventually made it to the ridge and there we found some flagging showing a trail along the ridge. We decided to follow it and our speed improved. Not much after finding the marked route it went up a steep slope and it was there that I fell and dislocated my right arm. That trip was then spent getting me back to the truck.

This trip would be much different. With me today was my son Nick. We left home at 8am and made straight for the Cheam parking lot arriving a bit before 10:30. We got geared up and this time started up that marked trail that I was fortunate enough to have found last time. No snow today and so we found following the trail easy and the flagging was well placed and easy to follow. The initial portion consists of a few switch backs to gain some quick elevation, the trail then meanders through some lush meadow and forest as it slowly ascends to the ridge line. Though it seemed gentle the climb was actually still quite aggressive as we wandered through the heather and wildflowers. We arrived at the ridge line where our climbing trail forks to travel to Archibald or Cheam in just under an hour, but we were both already quite worn.

After a brief rest we continued west and climbed the first of several sub-peaks on our way to Archibald. Though on the ridge, we still dropped and regained a lot of elevation as we made our way to the summit. After 20 minutes trudging along the ridge we arrived at the place of my fall. No more snow but it was still a very steep slope and I was almost slipping without the snow. Last time here we veered right at this rise but the trail actually goes left and so we inched our way across the steep slope and into some trees, Here the slope went straight up through the trees to a rock face. It was here that Nick decided he couldn’t continue; with the rough access road and steep climbs he was worn out. I wasn’t about to let this summit defeat me twice and with only about a kilometer of well-marked trail left I decided to go it alone.

So up the slope to the rock face and sliding along it brought me to an open meadow with a gentler grade. The trail remained easily followed and I continued along through forest, a couple more rises and drops and finally I reached the summit area after what surprised me was another hour of hiking. The summit is actually a couple of ridges with a broad meadow between which sported a number of small rises. I picked my way through the outcrops to the far side and the western ridge. There I dumped my pack and just rested for a few minutes. I was here! As I had left Nick behind, I didn’t want to stay long so I set up my radio and immediately was talking with Ken (VE7HI). It was now 1:15, 2.5 hours after we left the truck. I worked 4 more stations and then stopped to eat. I tried a few more calls but nothing more was heard so I packed up the gear and by 1:50 I was already on my way back to the other ridge and starting back down.

The trail flagging was actually quite good and even though I was in cloud the entire time while on the ridge, the flags were generally easily spotted though I did need to do some searching a couple times on the ascent. Going down was much easier as the flags stood out a bit better. By 2:30 I was approaching the final meadow above the rock face and there I met up with Nick. He had decided to move forward along the trail a bit while waiting for me. So back together, we continued across the rock face, down the steep forest section and past my fall location to the easier trail ahead. We still had several climbs to complete, but we were mainly descending and so made better time than on the way up. We reached the parking lot by 3:35, just a bit under 5 hours on the trail. Though I have done longer hikes in length and time this one seemed particularly challenging. We were both quite exhausted.

After resting a bit and enjoying the clearing views of Lady Peak and Cheam we felt it was a good adventure. The fields were lush with flowers and sights and I’m sure that the walk along the ridge would have been full of amazing views had the clouds parted but as it was covered, my focus was to the more subtle sights closer at hand. I’m not sure I will repeat this hike, but I am glad to have completed it. In the lot I was chatting with one group having returned from Lady Peak, that summit had risen above the clouds and they had a spectacular view of looking down on them. Perhaps I need to redo the Lady next year but for this year I think I will return soon for a go at Cheam.

The rest of the drive home went quite smoothly, though we did stop for a coffee in Sardis to make the drive safer. The actual traffic was moving well for most of the way, allowing us to make it home by around 6:30. A long but rewarding day.