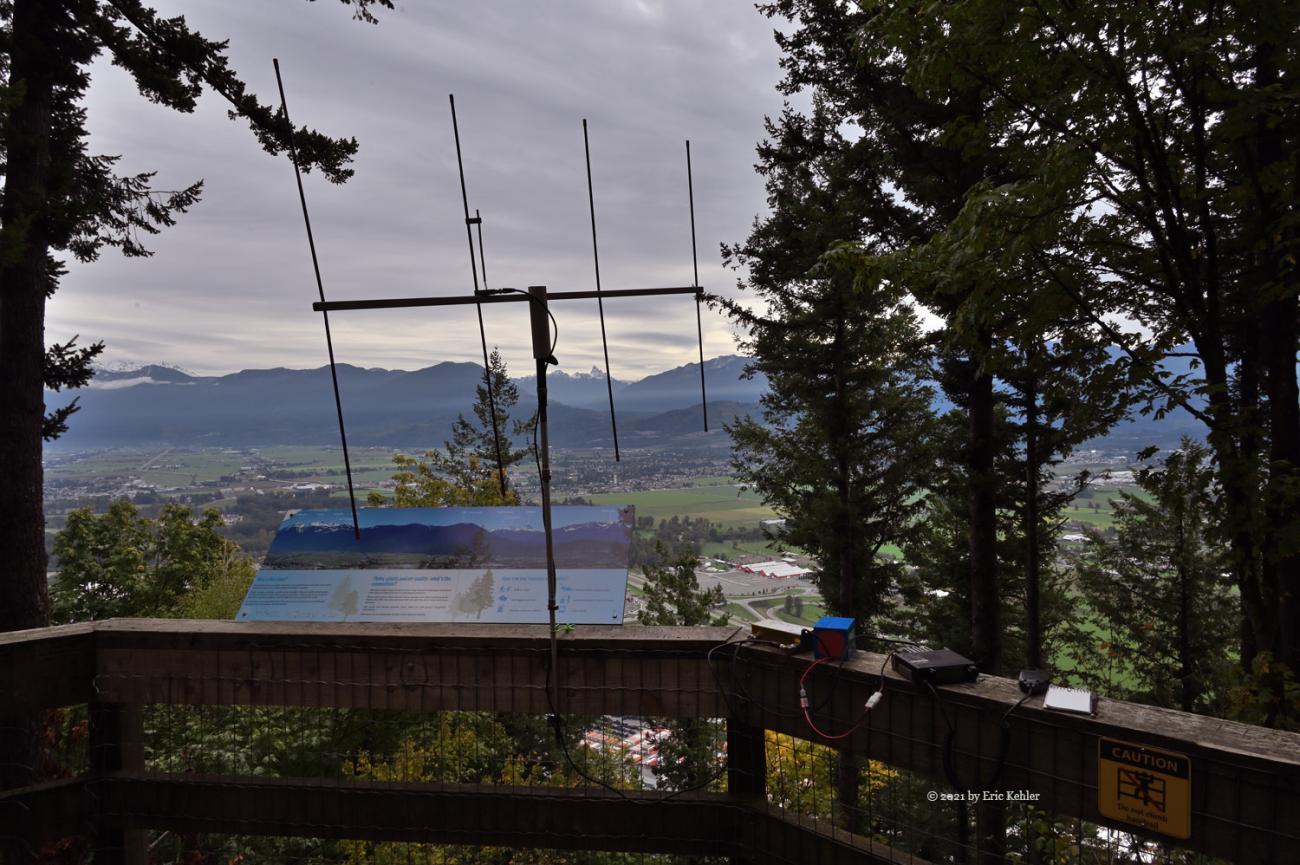 Chilliwack Mountain is a short one just west of Chilliwack, its eastern side is suitable for housing and so it is sprouting more homes higher and higher up the slope. The newest ones are now almost to the summit. Fortunately, the summit area has been designated as a park and so it will remain undeveloped. There is a communication facility right at the top but the area around it should remain accessible.  Years back I drove up the road to the top passing the many homes looking for views.  I was not doing summits-on-the-air back then so the view was all I wanted. But more recently, I wanted an excuse to return and finally the mountain was added to the list.

The actual summit is just east of the communication area but that region was marked private and so we opted to stay out of it. The viewpoint is just east of the summit and just fits inside the activation zone so we thought we would head for it and see what we would find. We could always bushwhack a bit up slope if needed. Mid-week seemed to be the next opportunity to head out while avoiding the rain so we planned to go on Tuesday, not always the best for finding people on the bands but we thought we could scrounge up enough.

We left my house at 9am and made for Chilliwack the GPS map suggested an alternate route to avoid the busy areas and we discovered some new areas of Langley to enjoy. Soon we were on the highway and approaching Chilliwack. Our summit was on our left as we came by and shortly after we turned off the highway, we were making our way up the slope and past the older of the homes in short order. The road was decently maintained and we made quick time to the end where there were a few parking spots for the Hillkeep park. There are two routes out from the road at this point, a loop trail past some ponds and a road to the towers and viewpoint.

Since it was fairly close and the road looked good we decided to load up my cart and we set off for the road. The distance along the road went very quickly and we were at the trail portion before I thought we had gone far. The trail looked wide enough for the cart so we continued along it only to find a flight of stairs! We carried the cart up them and up three more short stairs and then a rock staircase. It wasn’t too challenging and once past the stairs it was a very short distance to the viewpoint. A nice bench was there along with a viewing platform. Ralph claimed the bench for HF I went to the edge of the platform and found a way to hold up my yagi.

Ralph asked for first activation so I held off a few minutes for him to finish setting up his equipment, once he had his first contact I started my calling. It was quiet. No one there. I texted my wife to call on the house antenna and she came in clear; my signal was strong so I knew I should be able to work some stations. Soon after, I had 4 more in the log. Ralph had enough also, and as we were already getting a bit chilled we opted to not push it much longer. I did try some HF phone and even heard a station from Spain but he had too many working him for me to get in. After a few more similar attempts. I decided to pack up.  I tried to spot myself but this new summit wasn’t in the list of my app yet, hopefully soon.

The return went even easier than the climb and we had no trouble with the cart going down the few steps. The road was a breeze and soon we were loaded and driving back down. We did have a couple visitors to the viewpoint while we were there but none seemed interested in our activity this time. A pleasant easy summit for the cooler seasons. I am glad to have finally activated this one. The views from the viewpoint are quite nice towards the south-east. A descriptive board points out the various summits to the south that are visible - Cheam, Slesse, McGuire. This will be a regular cool season summit for me in the seasons ahead.