An Adventure up a No Name Mountain 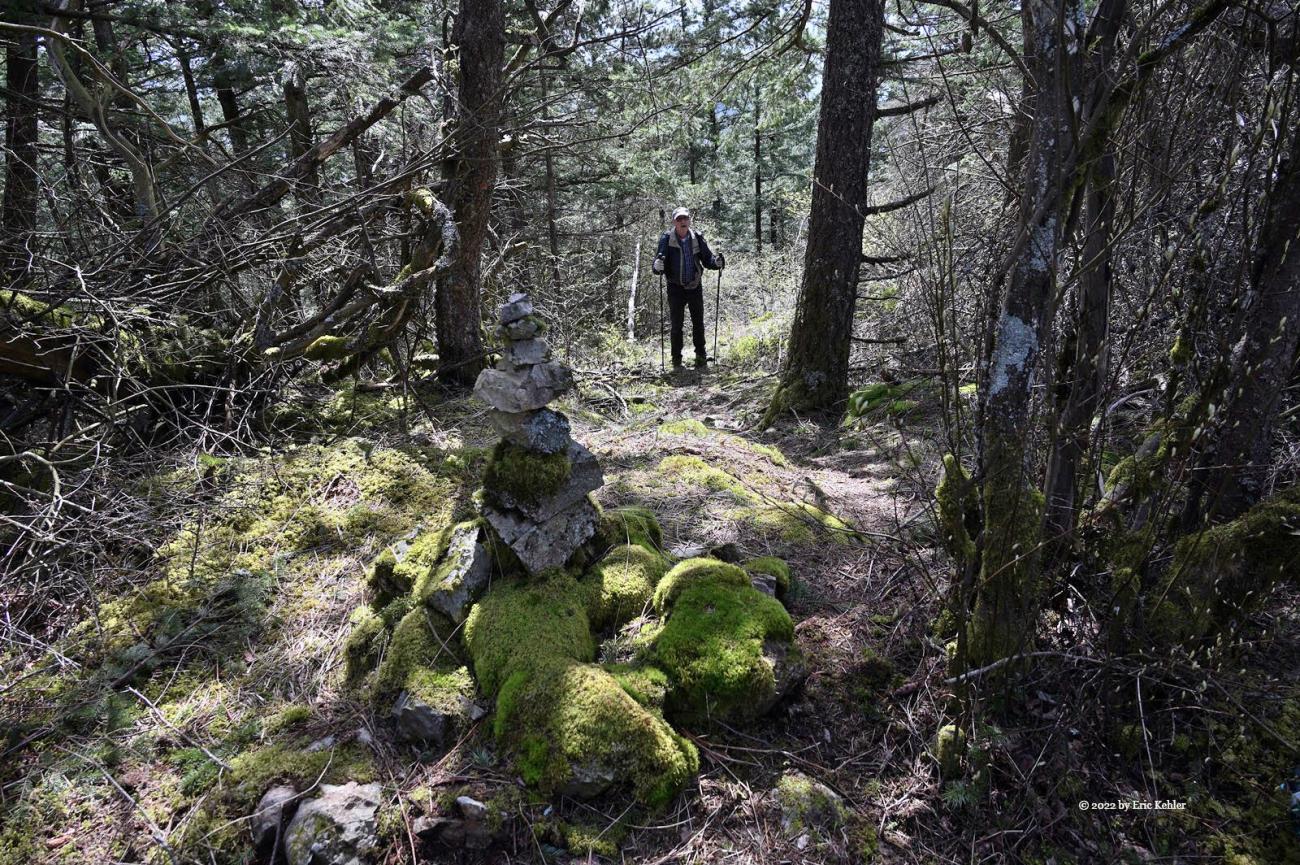 One of the fun things about doing Summits on the Air is the going to places one would have never really wanted to visit. Such was today’s adventure. I had been looking for more lower summits I could do while the taller ones were still deep in snow. This peak was newly added to the list and as I had never been on it before I felt it would be worth a visit. The summit is in the Sumas Regional Park so it is also included in the Parks-on-the-Air program, so going would give us dual credit. It being in the western portion of the park, it is much less travelled than the main eastern area. There is a trail on the map which leads to the summit and so I felt it would be one I could do. Now to wait for a decent day.

Summit FV-595 as it’s called in the SOTA list has a loop trail that traverses the western flank of the hill, there is a spur off of it that goes to the summit. The main loop trail is reasonably popular and it seems to be fairly well maintained and easy to follow. The spur is much less so and the trail is mostly just a disturbed dirt path up the slope and around cliff faces. I was able to follow it but was unsure in a couple of spots. But all of this I did not know when planning for the hike.

I had been eyeing the summit for a few months since it was first activated back in January but I had a few others to do first and with the poor weather, dry Saturdays were rare. Eventually the chance came and Ralph joined me for the day. We left my place at 10am and made straight for the summit. No coffee needed today. We arrived at 11 and quickly got our gear donned and the trailhead located. As we were getting ready the owner of the closest house came out to walk her dog. I asked about the trail, she said that it was quite popular, so I figured we should be off to a nice start.

The first section of trail was indeed very nice. It looked to be reasonably maintained and was quite level, which of course meant the rest would be extra steep. We arrived at the fork for the loop that crosses the flank of the hill, this trail was a bit less maintained but still looked good and was easy to follow. Now we had some steeper sections as the trail made for the flank. One section involved some scrambling as it made its way up the side of a rock face. Fortunately, it was only about a 6-foot section so we both felt we could handle it on the return. The trail came by a small pond that was full of very noisy frogs. Their volume certainly adds up. Passing the pond, we next reached the fork for the spur to the summit. Now the trail looked no more than a disturbed dirt path but it was still easy to find.

After another scramble area we reached the final few meters of trail below the summit. At the peak a tall cairn marked the spot. There was just enough space to stretch out, so Ralph and I stopped to rest after the arduous climb. It was now a bit past noon and we still were ahead of schedule, so we decided to eat lunch before activating. Near the cairn was an old fallen tree, it had some nicely placed holes in it and one was just right to secure my pole for my Yagi. This got it a few extra feet above ground which helps with the efficiency. As I finished setting up Ralph wandered a bit further along the ridge to a wider area where he was able to string his antenna between two trees.

We were both now on the air and I was able to log 15 contacts fairly quickly on 2m. Prior to coming I was uncertain as to how the sight lines would be for 2m work. Fortunately, I was able to reach the lower valley with no issues and across to the southern Island. So, my concerns were unfounded and I had no issues making contacts. I was able to work a Summit-to-summit with a chap on Chilliwack Mountain. He was weak as we had Sumas Peak between us and he is mostly facing south with a bit of the hill knob between us. He had limited equipment so it was a surprise he did reach me, and off the side of my beam!

Ralph managed a few summits to summits as well as a station in France, so he was quite happy with the results. Today he had his new Bioenno battery with him for the first time and it worked very nicely. After around 40 minutes of calling, we packed up the gear and started the journey down. There was a short spur to a cliff top where there was a bit of a view to the south as the summit itself had only a small glimpse of the north between tree branches. It is not a summit for sight seeing, though the loop trail does reach one lower view point. This spot was nice and warm in the sun and the view though narrow was still quite pleasant. Back on the trail, we took the two scramble sections very slowly as we carefully lowered our feet to each foothold. Though a missed step would not be life threatening, one would slide 20 to 30 feet before stopping in a clump of trees, not a pleasant prospect. So, we both took extra time to make our way down those areas.

Soon we were back to the pond listening to the frogs. Then down some more steep areas and a final scramble. Finally, the main trail was before us and the rest of the walk quick and easy, though our legs were a bit tired. Just before we reached the end, we came by our first fellow hiker. He was originally going to do another close by trail but it had so many people on it he cancelled that and came here. Reaching the car was definitely a welcome sight. Though only 1.1km each way the steepness was a challenge for us, I’m not sure we will plan to redo this summit next year. Still, it was a nice day out in the sun and we both got our summit and park activation for the effort.