Anderson River and the Uztilius

A new area for us to explore, it was quite a drive to the start but we enjoyed the drive through the hills and learned that we will need to spend many days up here to see it all. 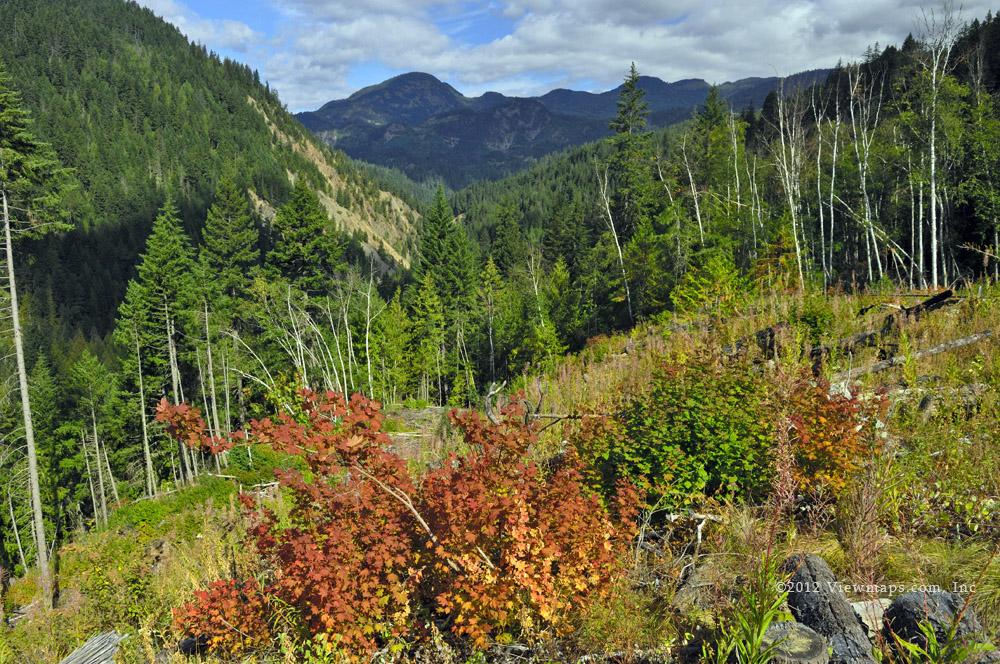 With the local roads being well travelled it was time to open up some new areas for our exploration. The big negative is the time it takes to get to the start of the roads and then back home. But we decided to give this region a go as we had briefly seen the start of the Anderson mainline last year. So we left the house an hour early and set off for Boston Bar where the Anderson mainline begins at the highway. The drive up the transa-Canada seemed to progress quite quickly and once in Boston Bar we refilled the tank and started up the Anderson River FSR.

The initial road segment we did last year but back then we got in only a few kilometers before being stopped by snow. Today it was warm and the snow long gone. So we made good time as we drove south along the river. It was not the most exciting of drives at this point as the river was hidden from view. We continued south staying on the mainline for the most part. Eventually we got a bit bored with the less than amazing views so we took the next branch which forked right down towards the river. It was a couple Km long and not too rough to travel. When we reached the end we had a bit of a view of the valley but the river was still unseen though we could hear it. As we returned to the truck we noticed that the tonneau cover had slipped and needed to be repositioned badly. The one fastener had popped off and was no longer holding the cover in place. It was the one that I had repaired before and it needed careful work to get it functioning again. Once secure we returned to the mainline for further driving.

We continued south and eventually came by a major fork. This time we chose the left side not fully realizing where it would take us. A short ways along we passed a large group of campers who were out for the long week-end. Continuing east we soon were making our way through a narrow valley following the Uztilius River. This valley gained elevation and soon was passing through some scenic areas. Here we managed to get out of the truck and actually find things of interest to shoot. Towards the end of the valley we chose a side branch that climbed the slope where we hoped we would find some nice views. It was worth the effort as we did manage to get some good shots from higher up the slope covered in wild flowers.

We returned to the Uztilius mainline and edged up a maintained but chewed up section that climbed the slope out of the valley. The road was now travelling along a higher plateau area with branches heading off in all directions. It was fortunate that the main route was marked with good signs. So we continued along with little difficulty. But here we learned that the area is so loaded with roads to explore that it could only be done by camping out in the area. Finally we reached a branch where we had to make a choice, either to continue along the FSR and end up at Merritt or take the right branch and head to the Coquihalla. We chose the right branch and followed the Dewdney FSR to the Maka which connects to the Murray Lake Road.

As the Maka FSR crosses the Maka Creek we pulled over into an empty wide spot to eat our lunch. Before settling in for food we walked out to the creek. The creek rounds a bend here and formed a wide pool. As we approached the creek we startled some Salmon which were resting in the water. They were on their way to spawn and in need of some rest. They were quite interesting to watch and both Geoff and I enjoyed watching them for a while. As we looked over the creek in more detail we discovered a few salmon carcasses, it seems that some didn’t quite finish the journey. After gathering some photos we returned to the truck and started cooking our lunch. Then Geoff did a bit of target practice while I explored some sheltered camp spots under clumps of pine trees. Done with the site we started off down the road to the Murray Lake Road where we decided to take the longer route back to the Coquihalla.

Driving north we soon passed the first of the open range land we would travel through. Here Geoff spotted a set of ruts leading across the open space and he decided to follow them. We made it a few hundred meters before being stopped by a narrow opening. Though we didn’t get far, it did open up some nice scenery for me. We then continued along the road to a higher alpine valley where we observed numbers of cattle grazing in the rangeland. Eventually we came by Gillis lake. It was a lovely spot with some huge pines along the northern shore. We chose to drop down onto the main road through the recreation area and get some close views of the big trees. Having driven through the camping area we returned to the Murray Lake Road and continued on out of the region. The road ended in a village of Kingsvale and here Geoff decided to turn left on the Coldwater Road rather than right.

Driving north on the Coldwater soon brought us to a rise with some nice views of the valley. By now we were only 25km out of Merritt and so we decided to just head to Merritt and pick up a coffee. The road was good quality and we made good time to Merritt where we decided to drive through the small downtown area. Geoff found it a quaint spot that seemed quite pleasant. Done with sightseeing we made for the only Starbucks in town and ordered our drinks – it was very busy and it took a fair amount of time to get our drinks and leave. The final drive down the Coquihalla went quickly and soon we were passing old familiar landmarks as we homed in on the town of Hope.

Though a long drive to and from the area, we did see some nice countryside and came to the conclusion that this region has a lot of road to explore and that we will need to get out there and do it but not until we can spend the night.