We returned to the Anderson River area to travel a road we missed before and see if we could reach Gate Mountain. Though short of our goal we did find many amazing sights.
Category
Serendipitous Discoveries
2013 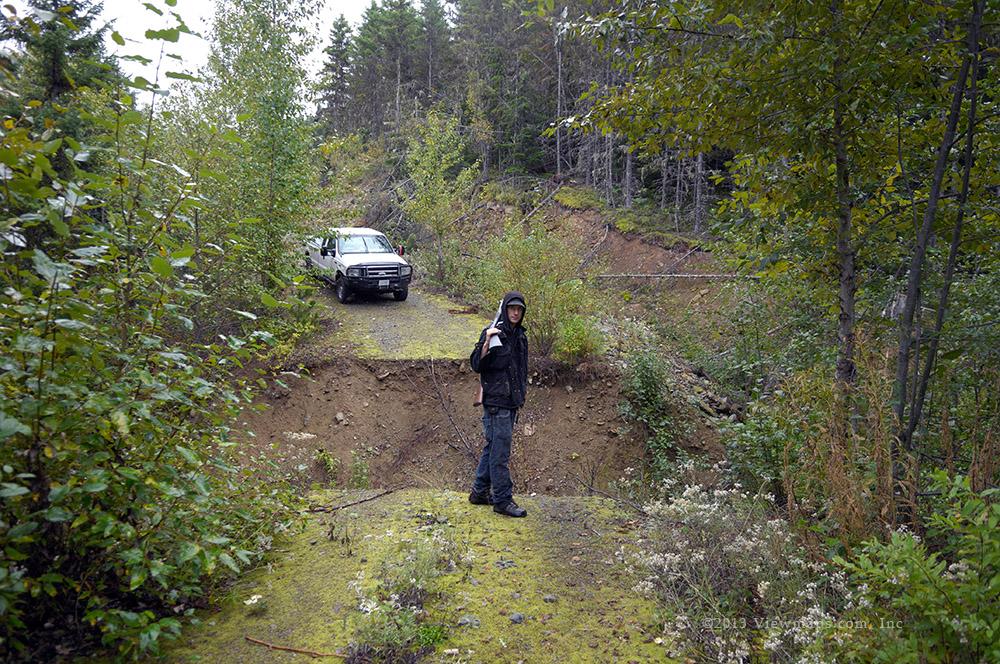 Today was the day that I had scheduled for a hike to the summit of My Seymour with my radio club pals. Unfortunately the weather had turned wet and so that hike was postponed a few weeks. So faced with an open schedule and with Geoff wanting to get to the hills, I decided to return to the Anderson River Area. We both wanted to find the road we missed previously and I also wanted to drop-in on a rocky cliff area where the fall colours are bright reds and oranges. So the Anderson was a good choice and not overly distant to get to.

Our morning began with Geoff’s arrival and him taking a few moments to play with our 15 week old Dane puppy Equus. She is hard to resist at this stage. Next we started reloading the truck, it had been unloaded for Geoff’s camping trip and we hadn’t put back most of the equipment. That took a few moments and some decision making as we decided to strip out a few items we weren’t using. Soon we were on our way to the coffee shop for a fix of the main drug needed for these adventures. Done with Starbucks it was off to Abbotsford to fuel up on the cheaper gas. Then we had clear sailing all the way to Spuzzum and the start of the Anderson FSR.

Upon arrival at the road we noticed immediately that the road was looking good but also well-traveled which raised a bit of concern. We prepared the truck for FSR travel and off we went to find our missing road. We soon came by the fork where the left branch heads up the ridge to the transmissions lines while the right continues south until it reaches a narrow gap in the ridge paralleling the Fraser before heading in.  We went left and just past the fork we came by a staging area for construction workers and a whole lot of safety information along with a new road frequency. The place looked busy but deserted. We didn’t have that frequency in our radio so I just dialed it in on my Ham radio. Immediately we picked up some activity – the guys were busy working the road and lines just over the ridge. Though muddy, the road was in very good shape and we quickly ascended to the ridge being passed by one truck coming down.

In listening to the radio we learned that the team was having trouble with one of their robotic tools which we found a bit amusing. Once on the ridge we followed the road north and after a couple kilometers we came by a branch, the main road continued right and down but we went left to regain elevation to the ridge. This far we had gotten last time but soon we would reach another fork and on that trip we chose the lower right-hand branch which dead-ended very quickly – we never did try the left fork. So left it was for today and we continued along on a decent road but with some taller growth down the centre line. By now we were encountered some showers and the road was wet along with the trees, it also made it darker and feel a bit foreboding.

As we came around one darker corner with trees overhanging the road, Geoff made a quick stop and jumped out of the truck calling me to follow. I grabbed the camera and followed him out, he pointed out a large clump of mushrooms in the centre of the road. I went back to get my flash and took a number of images. Geoff meanwhile had wandered off the road and found a number of reddish mushrooms and clumps growing from a log.  We spent a number of minutes gathering photos of the fungus with all the varied colours that they were showing. The wet rained-on-look made them shiny and added an interesting additional texture to the natural look. After gathering many photos of various clumps we returned to the truck and continued up the road. We stopped a few more times when we came by some additional specimens.  We were quickly making our way north along the ridge to Gate Mountain when we had to quickly brake thanks to a wide wash-out in front of us. This gap could swallow the truck whole and make for quite an extraction issue. On examining the gap on foot we noticed a small path to the upper side of the gap. Here was a small footpath built up a bit to enable walkers and possible bikers a way across the washout. Much too narrow for our truck.

Geoff crossed over and noticed a small lake just off the road and so I came over with camera gear and took some photos from a few spots along the edge. As we made our way along we found some interesting small plants to take photos of. The rain was on and off and we were getting wet so we returned to the truck and started backing back done the road. This continued for a distance before we found a wide spot to turn around at. A short way further back was another fork with a more overgrown road leading off further up the slope. We turned onto it and drove to a wider clearing and the effective end of the road. Here we parked.

We looked around and saw a short but beautifully moss covered cliff to our west. It was so interesting that we decided to get out and climb up to the top of it. This took only a few minutes and soon we were at the top of this small cliff enjoying the amazing colours of the many varieties of moss. When seen as a whole field, the varieties, colours and textures of moss can be very pretty. Looking down the far side of the cliff we could see a lovely moss blanketed open forest which was so inviting the two of us just had to get down there to explore it, we could hear frogs in the distance and that was calling us along to find the pond. We had my GPS in hand so we felt we could safely get down there and enjoy the open forest floor and see what was there.

As we made our way along the forest, we came by a trail which lead roughly in the direction of a small lake marked on my gps map. We decided to follow it and see where it went. The trail was actually quite well trodden and easy to follow and there were a few branches going many different directions. We followed what seemed the main path up the next rise and then down to the lake. We walked it that far and found a very lovely lake area which would be an amazing camping spot. So secluded and stunningly beautiful. As we hadn’t really come geared for hiking we decided to go no further and to return to our truck. The way back seemed to go so much faster than the way out and soon we were resting back at the truck. The sun was popping out from between clouds and the clearing was quite warm. Geoff was thoroughly enjoying the spot and marvelling at a dragonfly that was busy hunting the clearing around us. It was now around 1:20 and so we decided to eat lunch before moving on.

The rest and quiet felt good and we really weren’t in a hurry to leave. Geoff decided to set up a target and took a few shots getting near bulls-eyes with each attempt. He found his one riffle had lost a screw and so he didn’t shoot it lest it get damaged. Then we packed up and started back down the road. I wanted to drive over to the main road where there has been some amazing fall colour in past years and so we drove back down from the ridge to the very first fork - almost at the beginning of the main FSR. It didn’t really take all that long to get back to the cliff wall section with the red maples but it was a bit early and the leaves were just starting to turn. Another week or two are needed to get good colour here. Geoff did a bit more driving hoping to see a Grouse but they were all well hidden and so we called it a day and started the drive out. With Geoff’s work and school he was now quite wiped so I took over driving for the next segment and continued along the highway to the town of Hope.

After picking up a coffee at the Blue Moose Café we got back onto the highway heading home. About 20km out of Hope we learnt that the highway is closed not much further ahead due to three accidents! We quickly exited at the next road and returned to Hope to take highway 7 to bypass the stoppage. Apparently some people ended up being stopped for two hours! We were soon in Agassiz in a long line of cars which were now pouring down this route. We headed back to the highway and once on it the road was empty, it seems we were amongst the first to get around the stoppage and the road was wide open before us. We made very quick time all the way to our exit. Then Geoff took over driving the final bit home – even 16th was lighter than normal.  It is quite amazing how the traffic stoppage affects so much downstream traffic. It was a pleasant trip and we both felt relaxed from it.