Geoff and I returned to Anif Peak to climb it again without the clouds which obscured our view on our previous visit, it was a very satisfying view
Category
Serendipitous Discoveries
2014 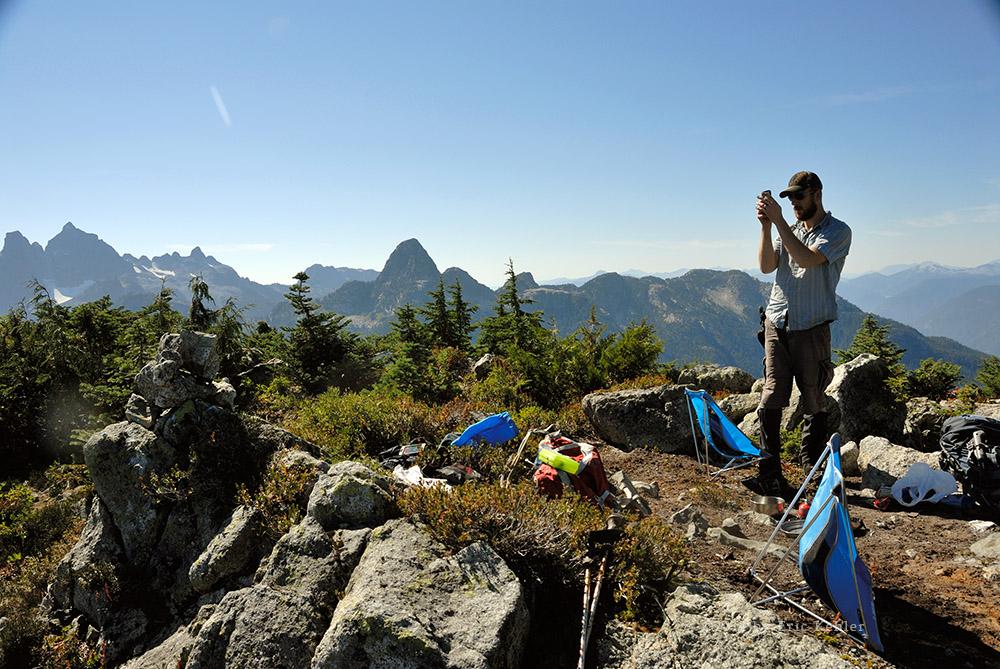 We found the hike up Mulligan and Anif last year quite challenging in the clouds as the plants were wet which got us soaked and cold. The steep slopes were slippery which facilitated a few slips and when we did achieve the summit the views were very limited thanks to the cloud layer. So we both felt we needed to revisit the mountain on a sunny day. Today was that day. I got myself ready and picked Geoff up at 7am and we set off for the closest Starbucks. Once the essentials were handled our next stop was some fuel and then the logging roads.

We arrived in good time at the start of the Mamquam FSR and stopped to read the road frequency on the road sign but we were greeted with a new channelized number and no frequency! The province is switching over to 40 specific radio channels and the Squamish area is one of the first. So we weren’t able to dial in the road. Fortunately our drive along it was short and the traffic light. We soon reached and zipped up the side road encountering only a single vehicle coming down. So we were very likely to be on our own up here today.

Upon reaching the end of the road, Geoff carefully turned the truck around in the narrow space and proceeded to park on the edge of the road. This left me no way to exit as there was a large mud puddle along my side of the road, after a few shared words he moved the truck back to the middle of the road until we were ready to set off. The initial segment of our hike was along the remainder of the logging road. This section started at a major washout and was now quite over-grown and the road was getting crowded out with Alder.  At the end of the road is a large pile of rotting logs which we climbed up on to survey the next section of our journey.

Upon leaving the log pile we had to make our way up a densely covered valley slope. The route went straight up the slope to the start of a forested section where the path was easy to travel. This slope however was thickly covered in wild flower plants, dried ferns and wild blueberry bushes. One was not able to see the ground so picking each step on the uneven ground was time consuming and tiring. Stepping into a hole or between two logs was all too common. Throughout the slope one could see trails where animals (bears) had made their way between berry bushes. Once we finally got past the open area and into the bush, we stopped to put on our cramp-ons so we could scale the slope easier as it was steep and we were slipping more than desired. The spikes made the trek up to the ridge very easy. I had my new more aggressive set with me today and this was their first use. They looked ominous but they sure do work.

Soon we were past the trees on the slope and in the open meadow where the slopes of Mulligan and Anif meet. Here there is a small stagnant pond where we could see several places an animal had dug into the mud to free up some water. After a short rest we continued up the slope to Anif. Last trip we ventured too far to the right of the ridge line which put us into steep terrain so today we kept to the left as we followed the slope upwards. Not much past the pond one is faced with the first of several vertical walls which would need to be circumnavigated. The easiest route on this first wall was to curve to the right side and then as one gains the elevation above the wall to circle back towards it. Once above this wall we were able to follow a trough up the slope just to the left of the ridge line. This allowed us to get past a number of steep sections we fought over last time. After gaining a few hundred meters the trough leveled off and we needed to get onto the ridge itself and cross over to the other side. Here we had a short steep section to get over but with spikes and grabbing onto many plants I was able to gain the ridge without incident.

After crossing to the right side we soon came to the first of a series of walls and cross ridges to scramble over. Each took some study to determine if it would be easier to try the right or left side. We were fortunate that our guess worked each time and we made decent time over these obstacles. The final wall on the east ridge we were climbing was now before us. It was a bit taller than the previous ones and the side slopes didn’t seem that much easier. Eventually we tried the right side and scrambled up some large boulders with just inches of ground for grip above the drop. It was a bit of a challenge and I wasn’t looking forward to making my way back down.

Having gained the final wall we were now in a more gently sloping knoll that led to a gap between the two sections of the upper ridge line between the peak and the sub-peak. We made our way through the gap and up the far side to the ridge leading to the summit. The walk along the top ridge is actually quite easy and we were soon at the summit enjoying the view. From the summit I called my friend John a local Ham from Squamish and we had a nice chat. He said we should look across the valley at Sky Pilot as a Search & Rescue operation was on-going for a climber who had fallen. Sure enough we spotted the helicopter passing just behind the peak of Sky Pilot (the climber unfortunately didn’t survive).

I gathered a number of photos from the summit and then we stopped to enjoy lunch and the warm sun with a lovely 360 degree view – so much nicer than last time. After enjoying an extended time at the summit we geared up and started the journey back down. It went quite quickly as we made our way down the ridge and over the various cross walls. Even the big one near the top proved easier than on the way up as we found a steep but more easily walked path a bit further to the side than where we ascended. It looked overly steep on the way up but likely would have been easier than the path we chose.

Once we were back to the pond we took a breather and stopped to recheck our gear before the final slog through the densely covered slope below us. Going down the uneven hidden ground proved even more challenging, I stepped in holes several times almost losing my balance. I really think this is the hardest part of the climb! Well soon we were clambering over the logs at the start of the road and ready for the easy section of the hike. It was by now much hotter than on the way out this morning so even though the path was relatively flat, the heat made for a tiring final 700m. As always, one is sure happy to see the truck again and get the pack off and sit down for a few minutes. Getting a cool drink out of the cooler sure helps a great deal as well. It was still early so we took our time unpacking and relaxing before we started down the road in the truck. After a couple bends Geoff spotted a Grouse in the distance and he felt it was a good chance to bag a bird for dinner. He didn’t want to get too close and spook it so he fired his .22 from a greater distance which went low and that spooked the bird. So no dinner for him tonight.

Further down the road we finally spotted a suitable log round that we could lift into the truck for an ornament in my yard. My previous one had finally rotted and was gone. We had been searching for a replacement over that past few trips so we were happy to finally locate a good candidate. The balance of the drive went quite smoothly and before long we were back home where I could relax and get into my hot tub to work out the kinks from the hike.