Three years since our last visit, it was time to see what the power project has done to the area. 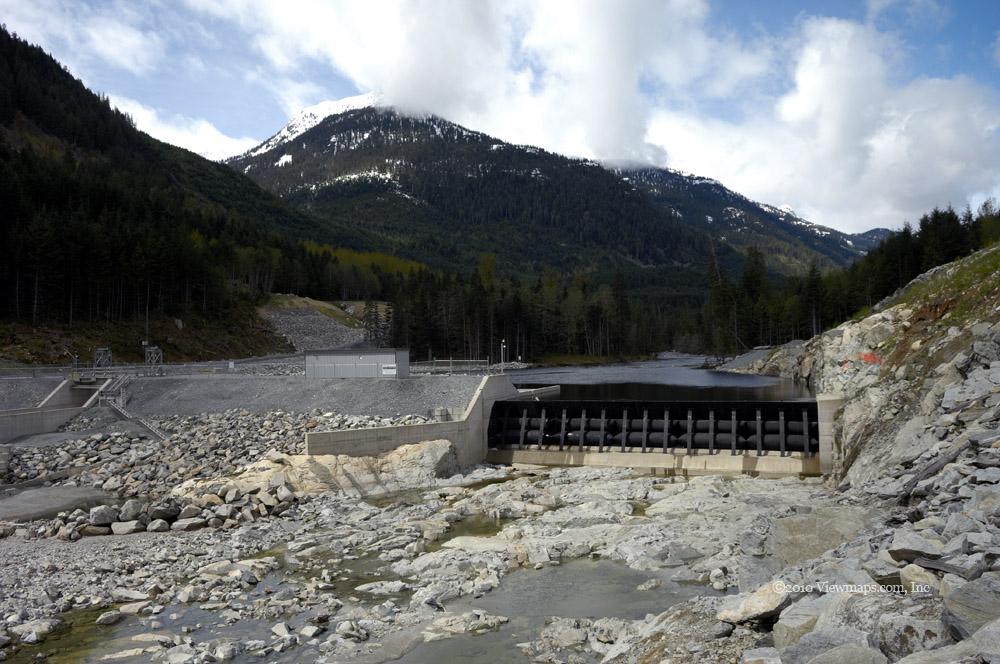 Iavoided the sea to sky highway for much of the time they were working on the highway in preparation for the Olympics. But they are now over and life has returned to normal. So it was time to return to the Squamish valley and finish the exploration of the area that we never completed over the years. My last trip to the Ashlu was in January 2007, we didn’t venture very far up the road back then as they were busy blasting rock for the new run-of-the-river power project. The construction was quite disruptive of the roads and I was hopeful the project would be done and we could explore it again, and reach the head waters of the Ashlu.
Driving along the upgraded sea-to-sky highway was quite pleasant, the southern sections were significantly improved but the northern half, south of Squamish, seemed little improved –perhaps they spent everything on the southern part. We touched up the fuel at Squamish and I took a few shots of the Chief. Then it was on through Cheekye and the native lands. I love their speed sign ’60 ends’, I wonder just how fast you can get away with through there!

Soon we were entering the Squamish mainline and the quick exit onto the Ashlu. The roads looked good and the construction seemed finished. We crossed the Ashlu and started our way up the steeper section of road that hugged the western side of the valley. We soon came to the new power house. It looked finished, a few workers were doing some finishing touches on the exterior but otherwise we saw little activity around it. Continuing up we came to the major bend in the creek where there is a nice over-look with views up both directions of the bend. The river looked normal – perhaps a bit less water flow than before. We stopped at creek level a bit further up and took a few more shots from the creek bed. We noticed a radio controlled siren alarm that is used to warn of a rapid release of water. I’m glad it didn’t go while we were there. Its presence seemed a bit ominous!

Next we made our way to the 25 mile bridge where I took a number of shots of the river rapids and the main river gorge where Geoff had a bad slip on his prior visit. The roads were still in very nice condition, and so we continued up the river and came upon a nice viewpoint showing the new dam constructed for the power house. It was holding back a bit more water than I had expected but the small lake it formed was still quite small. The dam uses inflatable bags to hold back the water which struck me as quite interesting.

After taking our time looking over the dam we continued up the river. We unfortunately didn’t make it to the end! We also got stuck at one point and had to winch ourselves but it was a tricky winching as there was a tree stump snagging our rear axle so we couldn’t just pull. We had to chop some trees to place the logs under the truck to raise it over the stump. But after a half hour we were past the obstacle and on our way. After a few more kilometers we were stopped by a large slide and were unable to get past it. Most disappointing. On our return we spotted a trail down to the river which we followed and had a snack on the river bank. Returning to the 25 mile bridge we found a side branch that we hadn’t tried before and shortly after entering it we came upon a couple of guys clearing the road of over-growth. It seems that one of them has made it his summer’s task to clear this side branch enough to get to a few forgotten hiking and rock climbing sites. It’s a big job but he sure seemed keen to do it. They had done over a half kilometer so far today.

We next explored the south going branch of the road – this was where we watched some helicopter logging a few years back but the road soon closed over and we had to stop. The map teased us as it shows the road continuing back to the first section of the FSR. We did stop to make some radio contacts before crossing back to the west side of the creek. Our next stop was at the actual dam site where we noticed a sign stating that the dam construction was now complete and accepted. It was dated for just the prior week! We then continued up to the end of the west road where there is an abandoned mine site. We were intrigued by the old buildings and took time to wander through them all and get a feel for the old mine. It had been a gold mine with other metals but now it is quite derelict. The main rock grinding building is still in good shape but all the copper wiring has been removed! It was interesting but definitely a bit depressing.

After our fill of the mine we returned to the start of the Ashlu FSR where I gathered a few more photos of the mountains of the Tantalus Range. They were really quite spectacular in the afternoon light. Another explorer joined us to gather a few photos of the peaks. Soon we were back on pavement and making our way home. A nice trip though disappointing that the upper river was not accessible in our truck – We may have been able to work an ATV through it. It’s just one more reason to get one soon.