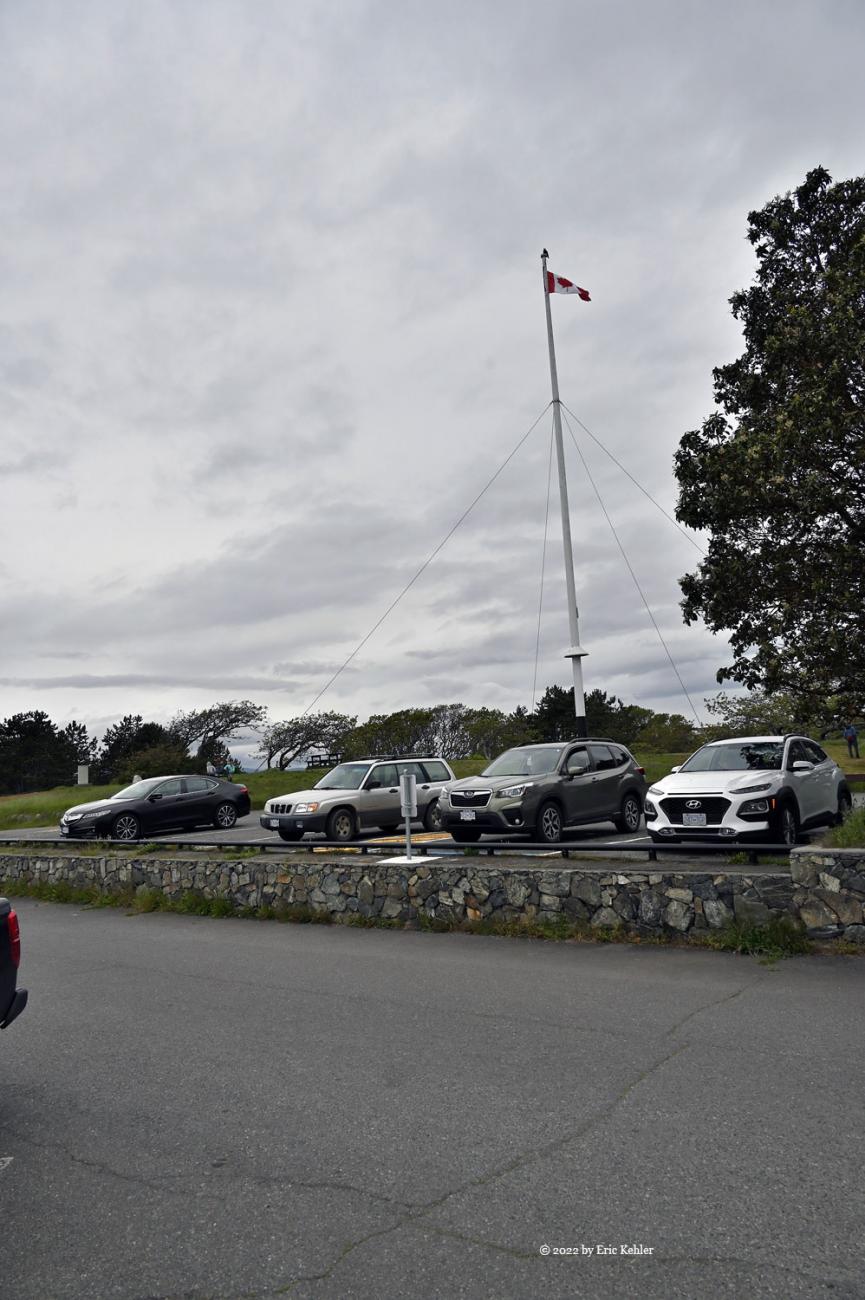 Today’s trip almost didn’t happen. The weather was blustery and promised rain. I wanted to get out but not of it meant sitting out in the rain while I tried to reach a few hams across the country who were likely enjoying nice weather. I am not that dedicated to making radio contacts. After a walk in the morning to a few stores so Carolyn could buy a few items, I reviewed the weather which had slowly gotten grayer. The odd rain drop splattered on the deck but generally it was just grey, cold and windy. After some more contemplation I thought I could go but sit in the car while making some contacts. That would keep me out of the weather.

With a workable plan in hand, I set out for the flag pole on the highest point of Beacon Hill Park. It took only a few minutes to drive to the hill where there were only a few cars parked up there. Fortunately there were a few open spots that would make a car activation quite easy. I picked one and parked. Then I scouted the slope next to the car and stretched out the dipole. It was somewhat more east-west than I prefer but I thought it would do for the day. Next, I fed the coax through the back window into the car and started to arrange my radio. For this trip I packed my KX2 with the 100 watt amp. So far so good and even the rain held off.

I dialed in the 20m band and scouted for a frequency; I found several birdies on the band at regular intervals. Likely caused by my car. This forced me to find spots between them that were not in use. Having settled into a frequency, I spotted myself and started calling. I soon had 5 contacts in the log but then things just stopped dead. The signal reports were decent so I wasn’t sure why there were no responses to my calls. Eventually 2 more came through but it was slow going.

After calling for 15 minutes with nothing further I switched frequencies to one down the band. There I started calling again and soon had a few more contacts, I reached the 10 count so I felt satisfied with the adventure. Here I started to get a few more in quicker succession and I was able to log a few more stations. At 14 the numbers paused again. As I had enough and the rain was starting to fall, I decided to pack up. I unfolded myself from the awkward arrangement I was in while operating in the back seat and exited the car. I took down the antenna and stowed the gear.

The rain was only slight so I decided to gather a few photos before heading back. There was a purple flower that was growing in the grass all around the area which caught my eye. After a brief wander around the area and a chat with a person walking his dog, I returned to the car to drive back to the hotel. It had gone fairly well. The bands were not great and the car added some noise but I managed the situation and had a warm spot to work. This arrangement may be what I do tomorrow as well.