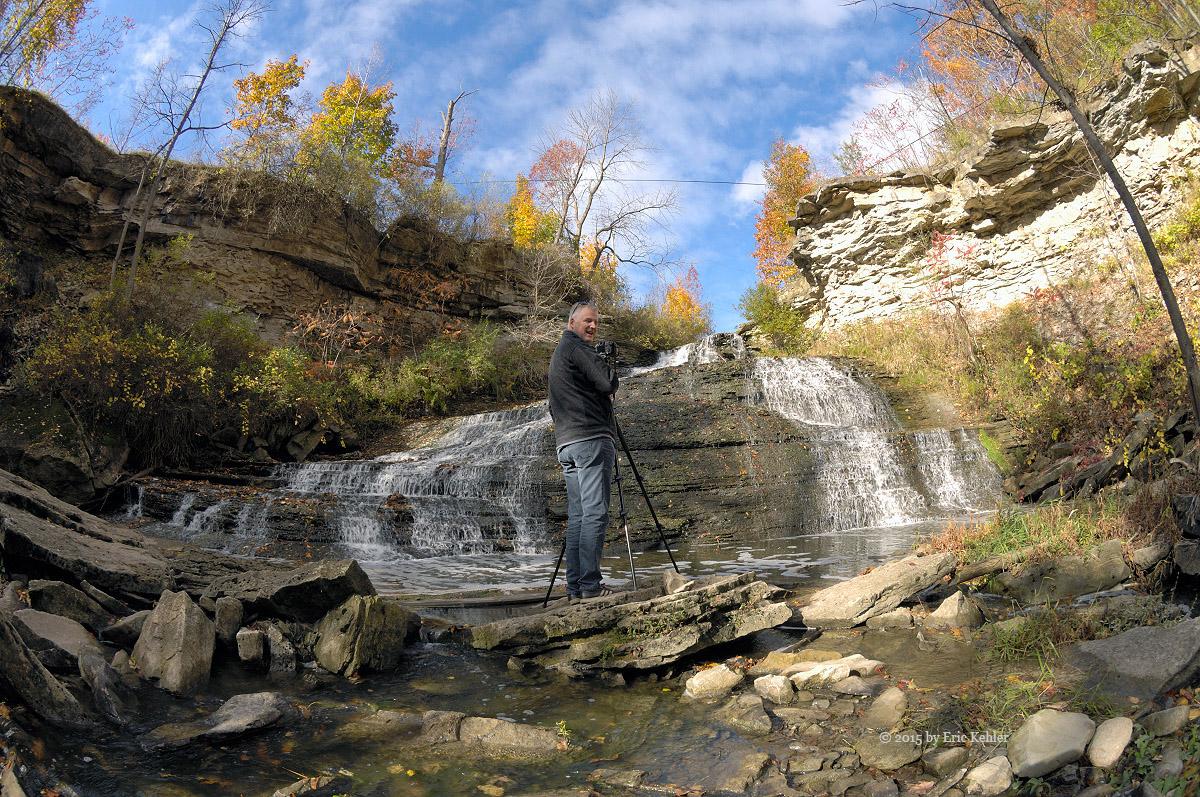 The day began cold, there were even some snow squalls in a few locations across the southern section of Ontario. The locals seemed to be in strong denial, after last year snow was not a welcome topic.  Mike arrived around 9:30 again today and we set off for the local hills in short order. Today we wanted to go south and do some exploring around the escarpment. We got up on top and Mike thought of Beamer Falls, it was still quite close by and so we drove over to the parking lot and strolled over to the cliff edge and stared down in to the creek. There were some great colours but the ravine was quite narrow and the sun not high enough to reach many of the trees yet. So we wandered along the side towards the upper falls and there we decided to get some more gear and climb down to the base of the falls for some photos. It was a lovely place to spend the morning and we both gathered a wide range of photos from many angles. It was the highlight of our day.

Once we had gathered our fill of water we climbed back up the ravine and set out again in the car along a few roads just back from the escarpment. We drove for some time but didn't find much that caught our attention, the clouds were not cooperating fully and we had muted colours when we did find something that could be of interest. Before too long it was time to head back to Grimsby to pick up Carolyn for lunch as we were all getting together to enjoy a nice meal. Once lunch was done Luke (Mike's son) joined us and we resumed our exploration of the roads south of the escarpment.

After lunch the clouds were much thicker and we had very few gaps with sun shining on the trees around us. We did stop at a few spots that were rich in colour but without the sun they were still quite muted and nowhere near what they could have been. We were getting quite disappointed with our lack of success. Luke suggested going back to the Beamer Falls area and the small forest alongside the creek. This sounded good and so we headed back to the falls and parked in the upper lot. It was full but we found a grassy spot that we could use.

We gathered some gear and set out along the main trail through the trees. As we made our way in the sun came out and lit up the canopy for us and we enjoyed some bright colours as we walked through the park. It was quite pleasant though the wind made it quite cool. We even enjoyed some great views of the creek below, the colours were very deep and rich. But we had only a few minutes of grandeur before the clouds moved in and we were reduced to subdued colour again. The coldness was starting to get to us and as the sun was gone we decided to return to the car and call it a day. So the day had its challenges but the morning at the waterfall gave us a very successful one despite the lack of cooperation by the clouds.