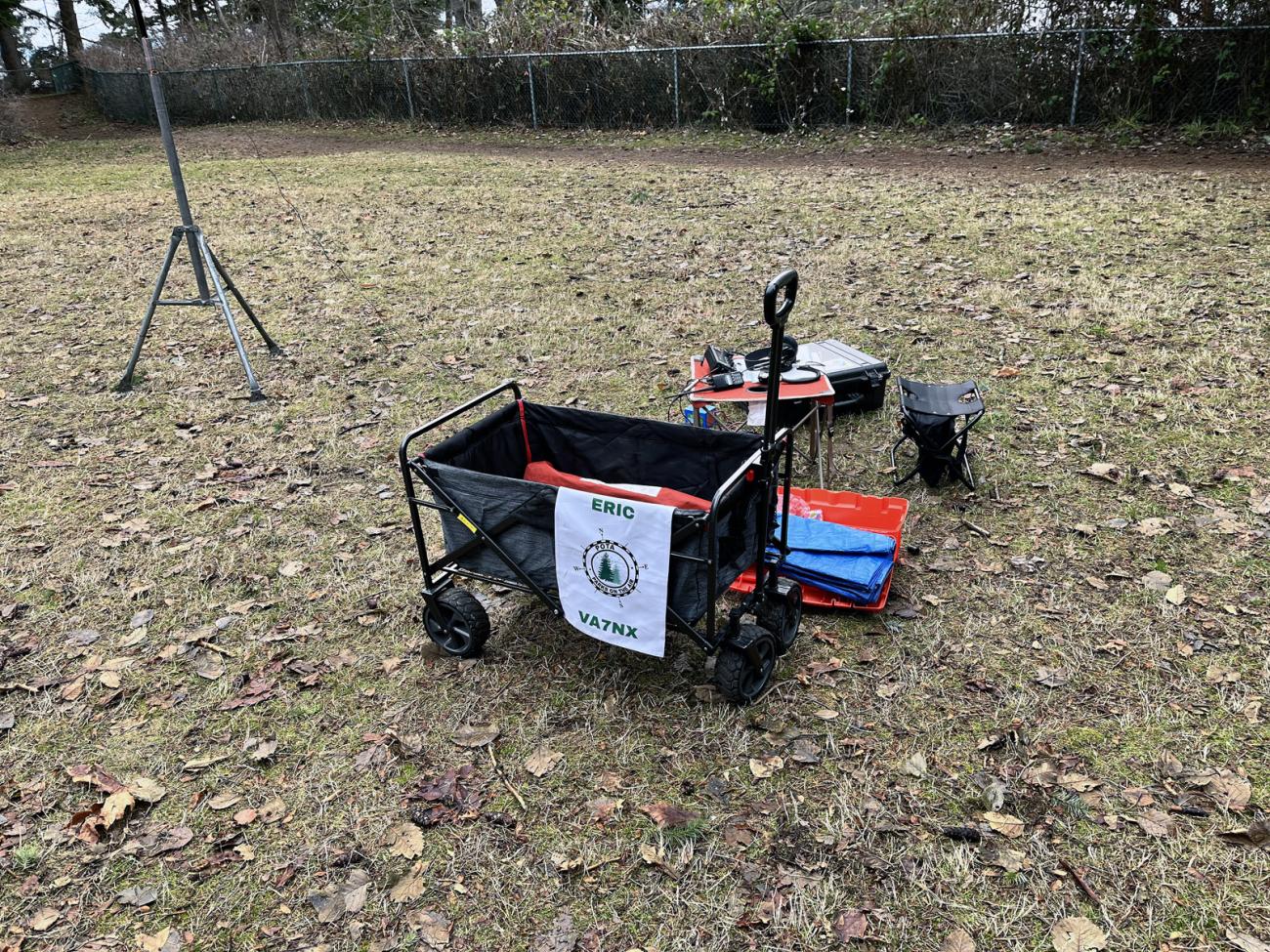 The parks on the air radio program offers a special award to those who venture out in the first week of the year to activate a park. My friend Ralph has been after me for a few weeks to make sure we get out and do a park to qualify. We were both carefully watching the weather reports to see if a decent day would appear during the first week of January. It looked like several days would be decent but Monday looked to have warmer temperatures than some days and since it was the first of the days we felt there was no need to put it off.

Come Monday morning and I was off with Carolyn walking the dogs, enjoying the cool morning air. Upon return to home, I noticed a message from Ralph asking about going today rather than Tuesday as originally planned. I Quickly called him as it was already approaching noon and we usually set out shortly after. He answered the phone only to tell me he had gone to Peace Arch Park that morning but would be more than willing to join me for a second park. So, after a quick lunch I loaded up the car and made for his place, him being on the way to the park for a change.  He was soon loaded and we were on the way to Ocean Park.

Upon arrival we noted that there were only a couple of cars in the small lot and so we were able to select a good stall for ourselves. Ralph opted to set up in the grassy area next to the parking area. I loaded the cart and made for the grassy area past the buildings. The day was fairly mild and the grass dry so the trek across the open area was without problems. I wandered past a group of small bare trees and set up where I operated from the first time at this park, this being my third.  A few groups of people watched as I set up and a couple came by to ask about what I was doing. All inquirers seemed quite interested in the activity and how far one can talk.

Once set up, I did a short scan of the 20m band, I heard a few faint stations at parks but they all had some loud pile-ups, so I decided to just move to 15m and find my own frequency for the day. Upon selecting a place in the band, I spotted myself and started calling. After a couple of minutes with no responses I checked the spot list and didn’t see my post. My first spot didn’t seem to go through so I redid the notice and confirmed that it was published. It took a few more minutes before the first stations responded to my hails but soon I had 5 in the log. All were quite readable and with the low noise floor at this location I was able to hear the callers easily. These first stations were on the east coast and included a chap in Puerto Rico. That was my first Puerto Rican station. I was feeling pretty good about the progress.

At one thirty Ralph contacted me on the 2m handheld to see how things were going. He already had enough in his log but I was at 8 so I still needed at least two more. I had only been active for 15 minutes so I didn’t feel that things were going poorly only that I needed a bit more time. I said that we should go for another 15 minutes and check back then. I soon had an Alaskan station in the log followed by one in Manitoba. Calls seemed a bit slower but that may have been due to me pausing to respond to the various people wandering by asking about the set up. By 1:45 I had 14 contacts and when I talked to Ralph again, he felt we had succeeded enough and needed to head to the local coffee shop. I agreed and so I shutdown the station.

It took only a few minutes to pack up my gear. I really try to keep it simple and quick to deploy and tear down. I get too impatient for a fiddly set up to be practical. This configuration works quite well and so I really don’t feel a need to change it at this time unlike Ralph who is constantly trying new antennas. Perhaps later in the year I will want to try some other options. Once packed I wandered back to the car while 0grabbing a few pictures of some interesting activities offered by the park. Ralph was already carrying things to the car when I arrived and we were soon loaded and driving to the Ocean Park Starbucks. It was a nice day out and we both felt good about our activity at the park. Now to plan the next outing and at a new park.