My first day in Ontario this season and we were hoping to take in a few waterfalls between glimpses of fine coloured panoramas. 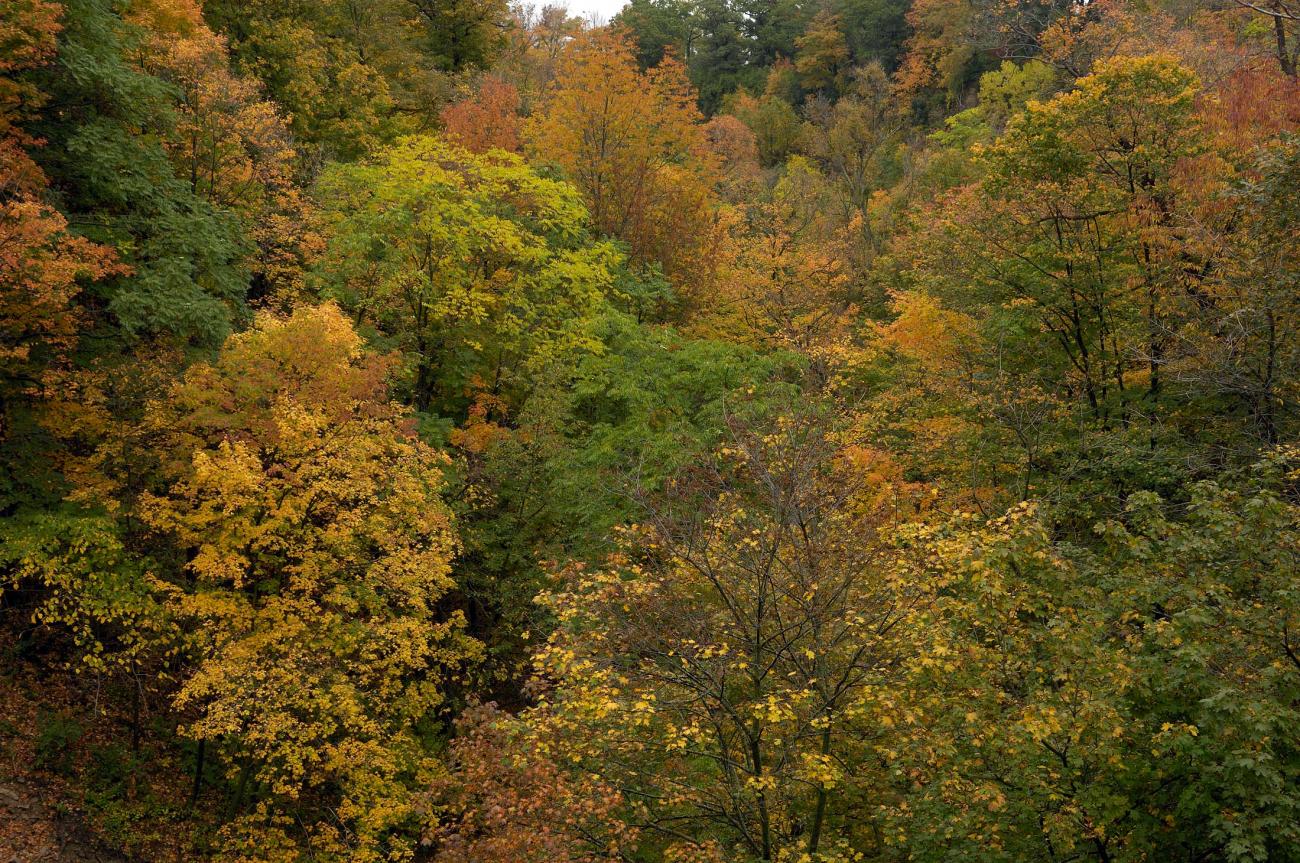 All week they had been forecasting rain for the day so when I got up this morning I was surprised to see some blue sky and a bit of sun. Perhaps we were going to be lucky and avoid the rain for our first outing. Only time would tell, so I got ready for breakfast and then at 10am Mike came by and the two of us setoff for our first destination.

Mike had looked up a list of the more popular waterfalls in the area and had picked three for us to visit. All three were new to us and so we weren't sure what we would find. Our first stop was Chedoke Falls, unfortunately we were unable to get a good view of the falls from up above it and we could see no easy route down to where a good view could be found. This was a serious disappointment but we didn't lose heart as we still had two more to view, so we set off for the second one.

Our next stop was just around the bend, Cliff View Falls. We drove past the park and parking area on our first attempt but after a quick U-turn we zipped into the parking area and found a spot. On exiting the car we could hear the water so we were hopeful that a good view could be found. We made our way to the edge of a grassy area to where a trail leads down a steel stairway of close to 300 steps. This trail connected to the Bruce trail near the bottom of the escarpment, as we still could only hear the water we felt that we needed to brave the continual rush of people running up and down the stairs doing some sort of deranged exercise program. Though we annoyed a few by slowing them down to our pace, we slowly descended the stairs carrying our heavy camera bags. The pain was still a future event not much considered during out descent to find the falls.

Before much longer we had reached the bottom and still had no view of a waterfall. We walked west from the stairs and there we saw a small portion of the stream but it was behind a locked gate! Now this was annoying after all that work coming down the stairs. So we struck out again. We were at the edge of a golf course where we had a few scenes of some colorful trees which took some time to capture, but all too soon it was time to climb the stairs.

A short distance up I could see where some had jumped the railing and trekked off towards the stream where they likely could see the waterfall. But we felt we should stay on the approved path and so we slowly made our way back up to the car feeling quite frustrated, not to mention the clear indication from the joggers that we were in their way. So we now set off for the third spot of the day.

Borer's Falls was the final choice of the day. We made our way through the town of Dundas and soon were climbing the escarpment once again. Rounding a final bend we came to a small parking area that provided access to the Bruce trail. We continued past and hoped to find the waterfall. The road rounds a ravine and at the point of it Borer's creek passes under the road and just to the side we could see the top of the falls. Not seeing any good parking we returned to the parking lot we passed earlier and there we studied a posted map to look for access points to the falls. We saw three viewpoints marked and we set out for the closest one. This view was of the lower portion of the ravine and offered a few scenes of colored leaves. We spent some time enjoying the co ours and gathering some photos. We then returned along the trail and continued past the lot to follow the edge of ravine. We stopped to take some photos of a vine of tiny grapes before continuing to the waterfall.

From the road we followed a short trail to the very edge of the falls. There we gathered a few shots from the cliff edge. We had to be careful as the ground was wet and slippery and neither of us really wanted a flight to the bottom. After a few shots we continued along the main trail to the second marked viewpoint and here we finally had a great view of the waterfall. We took a number of photos and some slow shutter ones as well. Then it was back to the car so we could get lunch.

We stopped in Hamilton at a gourmet hamburger spot where we both selected a lamb burger. It was very tasty and we both quite enjoyed our meal. Even the French fries were great. Done with lunch we decided to go look for some grape vines with their grapes still on. For this we set out for the escarpment south of Grimsby. We soon passed a few vineyards but they had all been harvested. Not giving up quite yet, we continued on to the ridge road where we soon found a part field still full of purple grapes.

We grabbed up our gear and set out for the field where we spent some considerable time taking photos of the vines. We used several of our lenses to try and capture some interesting new poses of the grapes. It was a fun spot and Mike and I both quite enjoyed taking a range of photos. As it was well after 4 pm we packed up and Mike dropped me off at the hotel. So we had a good day of photo taking with only a few drops of rain. Our fears of the weather were unfounded; I just hope that tomorrow will be just as favourable to us.