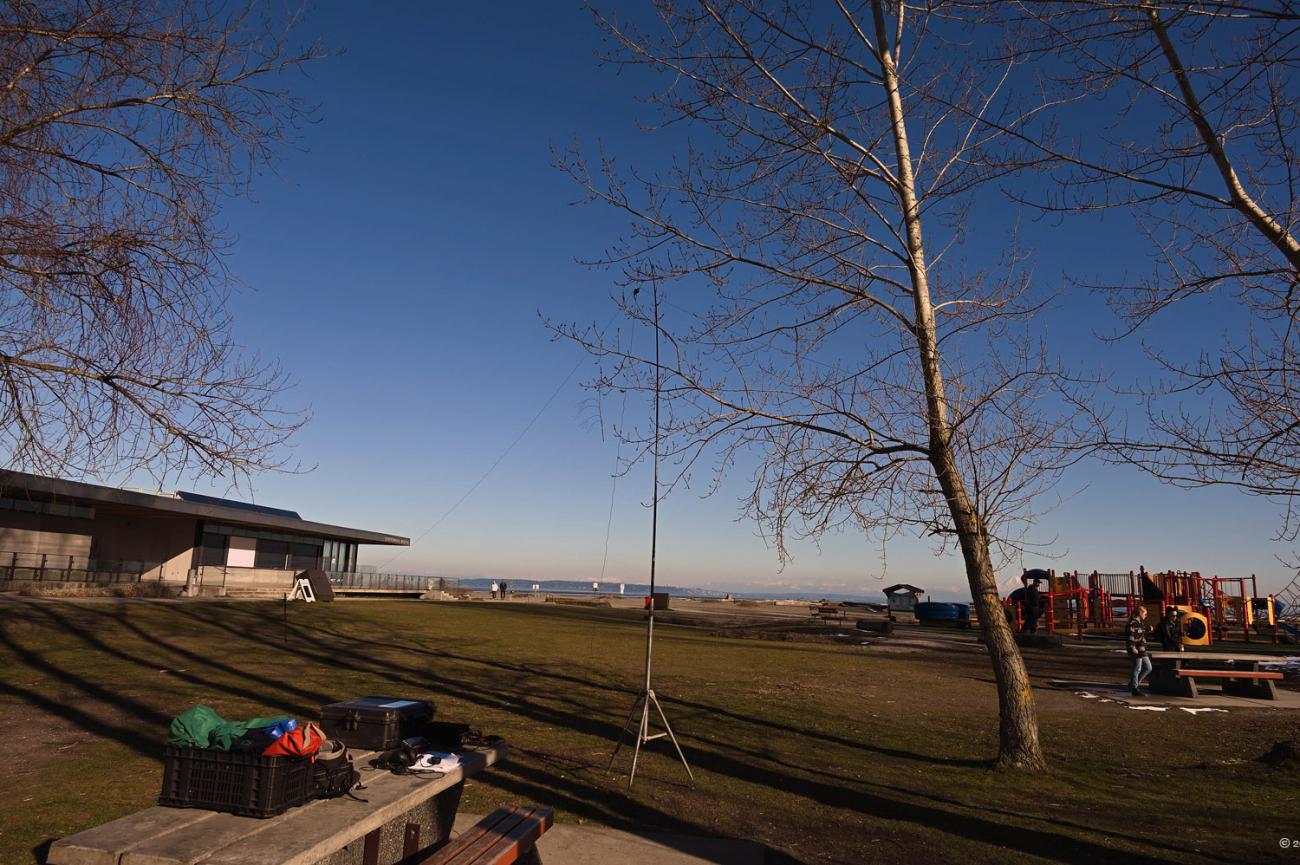 Foundary Bay Regional Park is a newly added site to the parks on the air list but its name may lead to confusion as there is already one called the Boundary Bay Wildlife Management Area on the list. The wildlife area is a large region encompassing the whole of Boundary Bay including its beaches and marshes. This regional park is a small area geared to getting people on the beach. The two touch each other which is why it seems like we were already here. Last December we decided to activate the wildlife area from the western shore, to get there we parked in the parking area of the regional park and walked across it to the edge of the beach. Today we stopped inside the park and looked out to our previous site.

Today was originally going to take place yesterday, but when we looked at the weather report, yesterday was only going to climb to 2C where as the next day, today, it was 5C so we decided to delay a day. Of course, over night it snowed! Though only a sciff was found at the park it didn’t help with the temperature. Well, enough whining. Ralph arrived at my place a 1pm and we loaded up my wife’s EV then set out for the park.

We arrived in good time and scouted out the main playground area. There were lots of bench tables to pick from and so we selected two a moderate distance apart and there we set up our respective stations. As this was a first activation for this park, I wanted Ralph to get the honours of being first so once I had my station assembled, I wandered over to see how Ralph was doing. He was having a slow start. After a few minutes of calling, he hadn’t made a contact yet. I waited there while he kept trying and then he had the first contact. I wandered back to my site gathering a few photos along the way.

I started calling on 15m today like the last few times and spotted myself. I also was having a slow start but eventually a chap from Oklahoma called back and I had my first station. A couple minutes later my second came along, this one from Michigan. I made a total of 7 contacts over an 8 minute period but then it stopped. I decided to switch to the 20m band though it would have more interference from Ralph. I spotted myself on the list and stared calling, soon I had several more in the log and had a few pile-ups to add to the challenge. It was a fun time but I was starting to feel the coldness in my hands and the fun of being there was ebbing away.

After working stations for around a half hour I had worked 22 stations, more than enough and as I was no longer comfortable out there, I wandered over to Ralph. He had over 20 contacts logged as well including a couple from Japan. He was also feeling the cold and agreed to close it down as well. I returned to my site and started to pack up the gear. While doing so a chap came by to ask about the activity, he was as asking if ham radio was dying out but I shared some of the interesting growth areas with him which got him thinking a bit about it. Done packing, Ralph made it back with the cart and we set off for the car. Once loaded we made straight for home. Well so we hoped, but we ran in to a delay on the highway. There was an accident close to the King George exit and we were crawling along for 8km. Once past the site we were back to full speed with very little traffic.

It was a lovely little outing and hopefully Ralph will get credit for the first contact for the park. Still a bit chilly this time of year but the sun was pleasant and the air fresh.