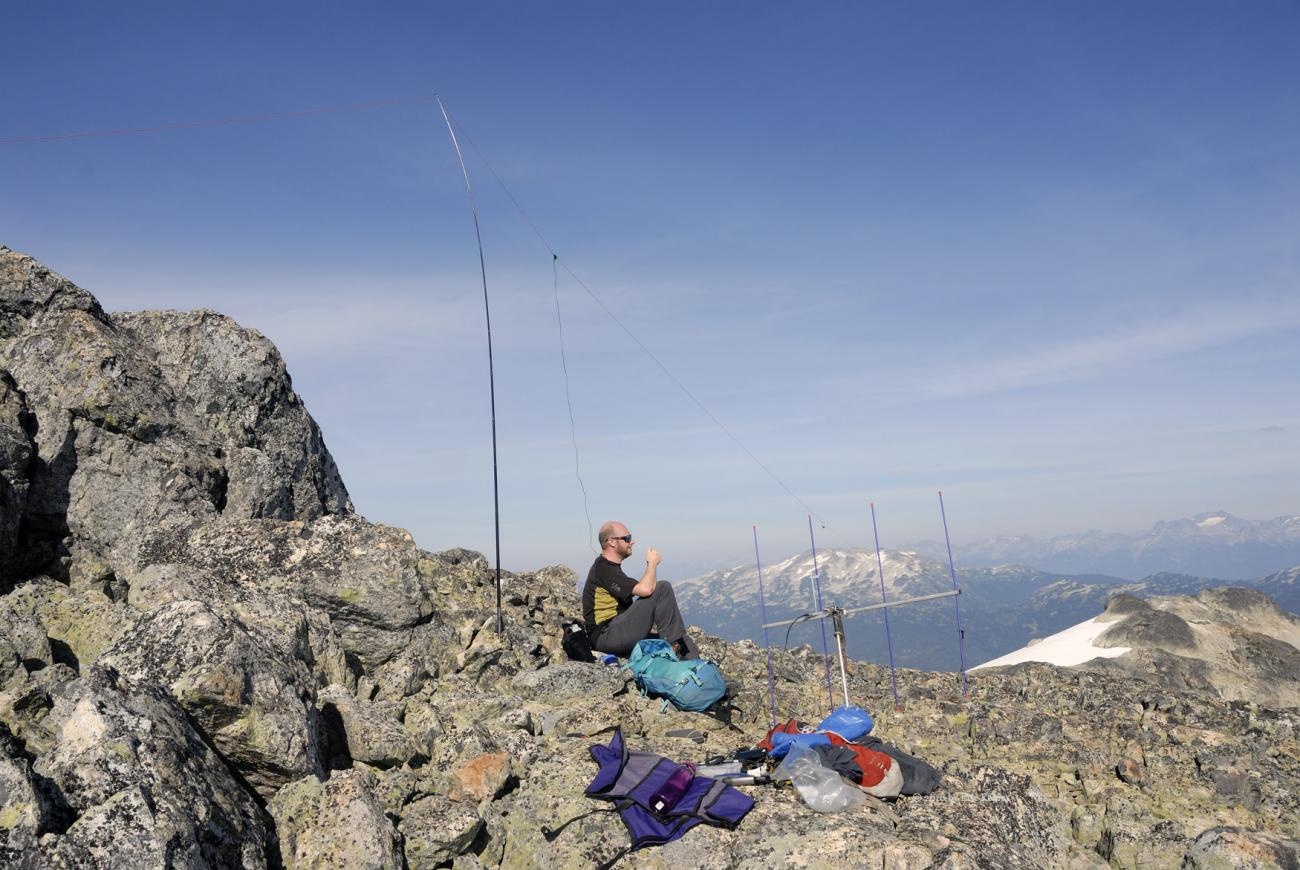 I had been talking with my Ham friend John Bell about doing another hike while he is in town. He suggested Brandywine Mountain as one that looked not overly difficult and was worth 6 points for the Summits on the Air program and at the time it was not yet activated. So despite my concerns about the amount of elevation gain I signed on for the workout. In the couple of weeks since we planned the hike another ham beat us to the first activation but we decided to go for the summit for the points alone.

Come the morning of the hike I set off from the house for the spot I was to meet John and from there we would continue on together. When I got to Highway 1 it was busy but traffic was moving along quite well so I was hopeful the rush hour traffic wouldn’t be overly harsh. Well half way across the Port Mann Bridge traffic stopped still. It was very slow going all the way to Gaglardi after which travel resumed at the posted speed! That was very odd and I really don’t understand how that works. I made decent time the rest of the way to pick up John but was a half hour late.

The drive to Squamish went smoothly and once in town I put out a call on the local repeater for VE7CUU – John. He responded immediately and provided some tips for the drive up to Brandywine. He would be listening for me when I got to the summit. We soon were pulling off the highway and onto the forestry road leading up to the Brandywine meadows. There are two spots that hikers regularly use to reach the meadows. The lower spot with 500m of extra elevation to hike is for those with feeble vehicles. The upper road is very rough in places and has some extreme water bars to navigate. It is for roads like this that I have my back-country truck and it made quick work of the upper road, we didn’t even require the winch. Once at the end we turned the truck around and found a nice spot to park. The views were already pretty good.

Once we were loaded up with gear we set off along the route. The trail to the meadow is well travelled and maintained, it is an easy hike and we made good time to the start of the meadows. When we reached the open section of the valley and had our first glimpse of tits length we were overwhelmed with the beauty of the area. It became instantly clear why it is such a popular destination. But our goal was that tiny summit at the far end of the valley. So we continued along the trail drinking in the sights and sounds as we enjoyed each new scene. When we reached the end of the broad valley we stopped for a good rest before tackling the next section which was a steep scramble up the rock strewn slope to the ridge.

Well, with a final look back on the nice easy hike along the meadow we watched another group of hikers make their way towards us with their dog. Now looking the other way and way up we were staring at the steep rock covered slope to the ridge 400m above us. I’m sure John simply was picking out a route, I on the other hand was wondering just what I was thinking to agree to this. John encouraged me by saying he was looking for the easiest way up, I wasn’t convinced it would be much better than any other. But we were here and the points were above us so I started up the slope trying to step on solid ground so I wouldn’t need to redo some steps or worse, require a medivac. After what seemed like an interminable progression of severe penance I made it to the saddle on the ridge. John was some welcome encouragement and his advice that we stop for a longer rest and eat some lunch was more than appreciated.

By now it was clear we would not be on the summit at our posted time and as we had cell coverage we updated our postings on the web. We looked back down the steep slope and noted that the other group had progressed a quarter way up but there they stopped, we didn’t see them again so I guess they decided not to over tax their dog with the rest of the scramble. The next section of the trail was along the ridge, the first bit had some short steep spots but generally it was a very pleasant walk as we slowly gained elevation to the summit. There was one spot we had to drop down 20m but nothing too much then we reached a section with a snow field that we had to cross along the top edge. Finally we reached the final rise to the summit.

The way ahead looked quite challenging and there appeared to be a trail leading to the left of the slope so we decided to follow that, hoping it would lead to a route up. It brought us to the flank of the summit with a talus field of large boulders. We decided to make our way up it and before overly long we were on a broad shoulder just below the summit, well within the activation zone. We selected a spot to stretch out on and there we started to setup our antennas. I gathered a few photos before putting the yagi together. With the beam and the 30 watt amp I borrowed from Ralph, I was hopeful I would reach back to Vancouver and the southern Island. I grabbed a few bites more of my lunch and put out a call, I almost instantly had a response from VEYGDH (Keith) on Salt Spring. Next in the long was Ralph who was mobile while driving home to White Rock. Next up was John in Squamish and a guest he had, I was able to work my wife Carolyn at home and ended with Wayne (WA6MPG) on Orcas Island. So it was a well-rounded group with contacts covering off much of the region identified in the coverage map I had generated. Meanwhile John was busy making some 20m contacts on my KX2. Its 8 watts were doing a bang up job for him despite a slow start and poor band conditions.

Once we had completed the needed contacts we packed up the gear and decided to walk the short final bit to the pinnacle of the summit. It was a quick scramble up the large boulders. The view to north now opened up and we saw some huge snow fields directly below us as the NW side of the summit was a sheer drop. John found a small geocache waiting at the summit. Well we could stay and enjoy the view for a long time but it was now after 4 and we needed to start down.

We decided to take the more direct path down off of the summit to the ridge. This proved much easier that that path around the flank and it allowed us to make up some time. Down we continued, over the snow pack, and back up the secondary peak. We stopped at a few points for photos but soon we were back at the saddle point above the steep rocky slope. Taking another longer rest we got well rested before the steep descent. That went fairly easily, I am much better at the descent on the slope though I did have a few slight slips along the way. Finally we reached the bottom of the slope and stopped to refill our water flasks in a nice fresh stream of ice melt. The colourful wildflowers along the stream caught my eye and I gathered a number of close-up shots of the yellow and purple flowers.

The next section at the head of the valley was a bit wet with the numerous streams we had to cross but it wasn’t that muddy so with careful foot placement we made good time down the final bit of the slope and soon we were back on the well-travelled trail along the meadow. We kept up a good pace as the sun was getting low and we wanted to be off the trail before sunset. With the quick pace I developed a bit of a muscle cramp in my lower back, but with a short rest and some electrolytes it was soon gone and we continued to the truck.  As we reached the end, a couple was just started up the trail. They were spending the night and were a bit surprised when we told them that they had the meadow to themselves.

We got our gear loaded into the truck and rested a bit when John noticed the last light on Black Tusk and Garibaldi across the valley. We both gathered a few photos and then the light was gone. So we still had some dusk to make our way down the rough part of the road and we got back to the main road before dark, but it was dark by the time we reached the highway. As it was now 8 pm we were quite hungry, we decided to grab dinner in Squamish. John settled on a Mexican place called Mag’s 99. It had good food with large portions, we arrived just before a large crowd of young folk. John said the line-up was often quite long. After each of us ordering a burrito Maximus we settled in to wait for the monster. And monster it was, I wasn’t sure I could eat all of it but I guess the workout on the sloped left enough room because I surprised myself by consuming it all. The final drive to West Van went quickly and there I returned John to his car and I set off for home, arriving a bit before 11pm. A full 15 hours of mostly fun. I hadn’t been convinced I would be able to complete a hike with so much elevation gain but I am sure glad I gave it a try and succeeded.