The hills in behind the residential area is full of roads and interesting artifacts from the old mining days. There is much to see hidden away in the trees. 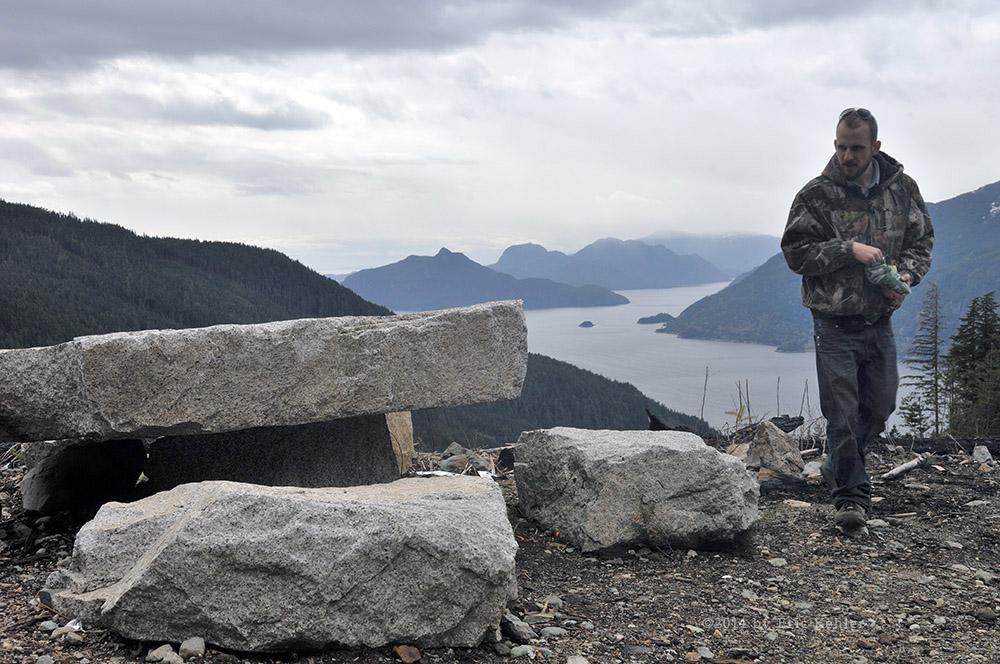 It’s been far too long since my previous trip the hills. This year has gotten off to a very slow start thanks to the weather and various other tasks which have been in the way of the all-important drives through the hills. Well finally today we were able to get the weather to co-operate and so off we went to the Britannia Beach area and the logging roads over-looking the town of Britannia Beach. To access the roads above the town one turns off the highway at the logging road entrance just past Furry Creek. This access point actually provides the way in for both the Britannia Beach roads and those in behind Furry Creek.

The initial section of road starts with a steep rise to get up above the highway level and into some serious trees and rock faces. This whole area is traversing sheer cliffs and in many places the rock face has been shaved to make a wide enough section for the road to skirt across to reach some denser pockets of trees. Not far into the drive we started to enjoy some views of Howe Sound, but our first stop was beside a small pond that was just below the level of the road. Here we parked and made our way down to the pond. Now this little excursion proved more hazardous than it appeared. The recent rains made the water level high and the ground very soft. The route down involved walking over a bed of fallen trees which were rotten enough to give way under load. So one had to be very careful picking each foot step to ensure one didn’t step on a log that breaks and drops ones foot into soft ground that then buries the hiking boot. After a few close calls I was down to the pond and in a spot to gather a few photos.  I continued past the pond and made my way up a small moss covered slope to see if there was a view to enjoy. It was unfortunately quite full of trees. So back to the truck and on we went.

Next we stopped briefly at a widened spot along the road where I got out and wandered out across a mossy rock surface. Not far in, the rock ended in a steep drop to a fast flowing creek far below. It was in fact a very steep ravine formed by two creeks which merged directly below where I was standing. After looking down into the dark depths for a while, Geoff persuaded me to come back from the edge and return to the truck. Probably a wise thing to do as one never knows how long the moss surface on the rocks will hold up to being walked on!

We followed the road up past Mineral Creek then along the ravine dug out by Britannia Creek.  We rapidly gained elevation and as we passed 800m we encountered snow which soon blocked out way forward. Backtracking we turned toward the creek and found ourselves looking at an old silted in dam area. It was quite interesting but the creek level had filled up to the top of the concrete and it no longer held any water. I suppose this was a critical player back eighty years when the mine was in full operation but today it is an old relic of once prosperous past. We continued along and found a few more interesting concrete structures which we were at a loss to explain their purpose.

Soon we came by the remains of old mining buildings and their extensive steel equipment. The machinery seemed to be some type of turbine but we weren’t able to confirm its purpose. It could either be a steam powered pumping facility or a water powered electrical generator. The marking on the steel showed dates from 1904. After spending time looking over most of the heavy pieces we moved on and looked over the rest of the area and the various other structures. By this time other trucks had moved in and started to explore the ancient site and so we felt it was time to move on.

We followed the road back to a major fork where we first crossed over Britannia Creek. This other branch was well travelled and in current use by logging equipment; we followed it in but turned up slope at the next fork and made our way up the side of the Goat Ridge finding several lovely overlooks with great views of Howe Sound and its major islands to the south. We even found a makeshift bench to sit on! This spot was also along a mountain bike trail where some extreme bikers make their way down some very steep terrain. We explored a few more side roads being stopped by snow again on the highest fork. It being lunch time we found a overlook with a view of the Sounds and there we enjoyed our hot lunch.

After eating, we started down the slope and soon encountered a chap riding up the rough gravel road on his bicycle! He was tired but not overly so and he seemed to have little trouble cycling up the rough road! Likely heading for that spot with the bench before he started his way down. He told us that the area is full of bike trails, so it must be quite a popular adventure out here. We continued to explore the various branches as we dropped back down to the main line where we started. We did come by two logging operations in our driving. The first was a road builder clearing some more roadway for further logging. The second group were busy hauling cut trees up to the road for piling and eventual hauling. It was an interesting operation. By now the day was winding down and we were both tired, being out of practice! So we returned to the highway and started on the trip for home. It was a fun area with a number of different sights to enjoy, but it was also a popular area and the numbers of recreational drivers had increased significantly as the day wore on, it was definitely time to head-out.