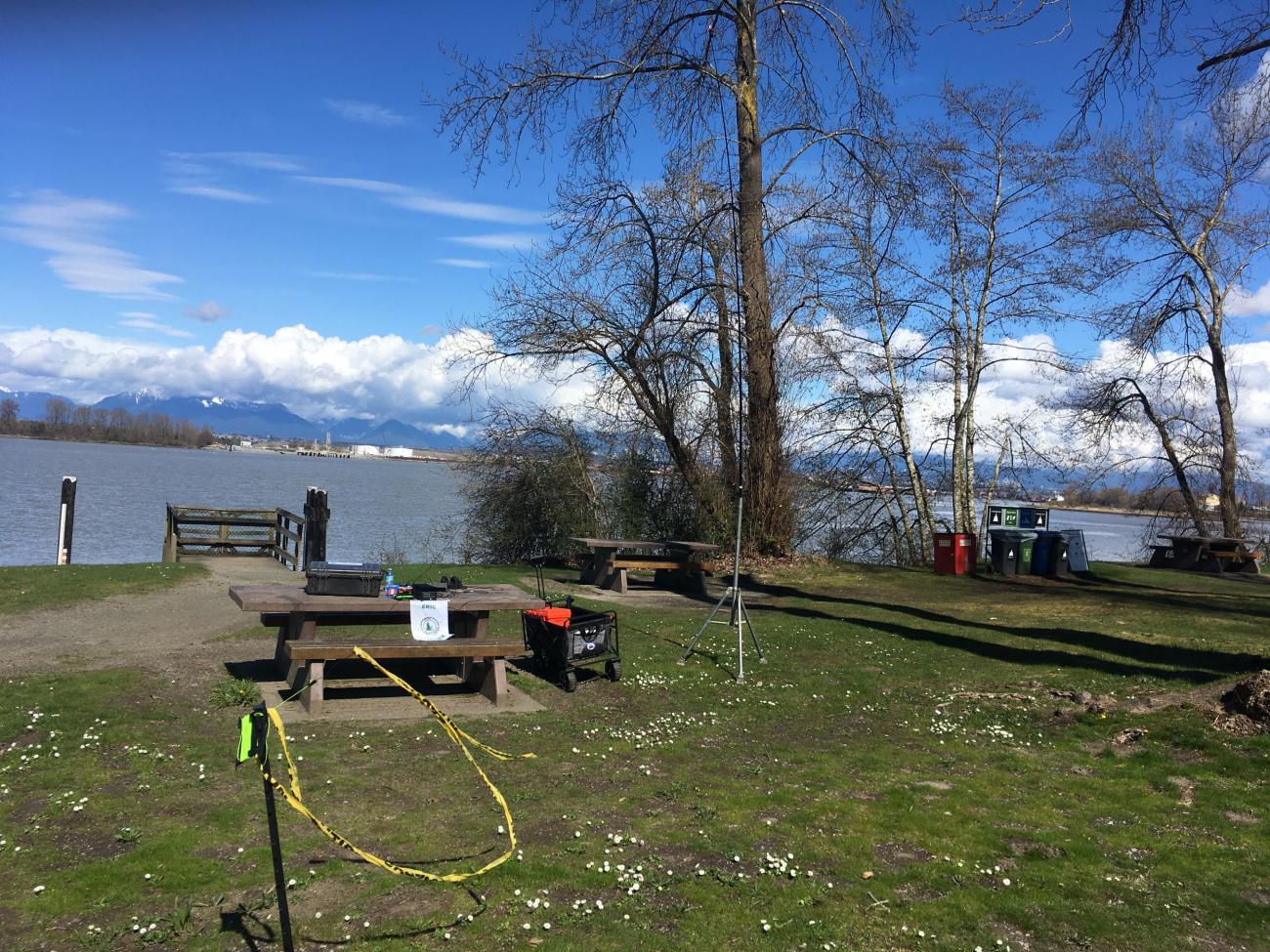 Farly this week I could see that Wednesday looked promising for getting out and playing radio in a park. As the week progressed, I kept watching the forecast as each day came and went. I really wanted to get to a park in Port Coquitlam as there are a few remaining that no one has yet activated but come Wednesday morning the weather looked less stable. Being a bit of a chicken, I decided that the Tsawwassen area would be safer than POCO as we all know it never rains in Tsawwassen! So, I redirected my attention to the Deas Island Park which was also new to me.

The drive was mostly along highway 99, the challenge was the river Road exit. One has to take the exit one overpass early! If you miss it, you can’t turn around until you get through the tunnel and then come back! So, I was paying close attention to the signs and the navigation system in my car. Fortunately, it proved easy to do and I really had no issue at all. But I was still happy to have made the exit OK. I pulled into the park entrance and decided I would drive the length of the roadway to see what sites might be best suited for the adventure. The place was very scenic and I decided to get out my camera and take some photos of the area, except I had forgotten it! Fortunately, the back -up camera was in my pocket.

At the far end of the road, the park opens up into a large open field area. I thought it looked perfect for the day. It included a large table area, washrooms and lots of grass. Unfortunately, on closer look I could see that many sections of the open area were under water! The rest of it looked very soggy and not at all appealing. There was a large group at the tables which was the only higher area. Since this looked less than desirable, I decided to continue driving back towards the entrance. I had passed numerous tables with ample places to spread out the antenna. I finally settled on a spot to park. There was a walking path and tables along the shore line next to the parking area and though some tables were occupied most we not.

I took a quick walk around the area picking the table I would use and then returned to the car to load the cart. I soon returned to the table and began stretching out the dipole. I used a tree on the water side of the area and my portable fence post near the walkway. A few minutes more and I was ready to go. I dialed in the 15m band and decided to scan it to see how busy it was I immediately heard a loud station from Italy! I decided it was worth trying and so I joined the pile-up and fairly quickly got through! So, my first contact for the day was in Italy. The came a a station in New Hampshire followed by one from Spain who found my calling frequency. Two European stations on 15m. Not a bad way to start.

I continued for most of an hour logging stations across the continent but no more European. Still, it was a good mix of locations and signals were fairly strong and the noise floor quite low. It is so much nicer than those parks surrounded by close-packed houses. There were a few people passing by on the path next to the south end of my antenna who stopped to get a quick idea of what I was doing. I had my POTA banner on display so many could see that from the walkway. As I was packing up one pair of women were quite interested in the activity and I took time to explain various parts of the set up and where my contacts had been. They do a lot of walking in parks and we ended up talking about some in the White Rock area that would be of interest to them.

Done with packing up, I transferred the gear back into the car and made for home. Getting back on the highway from here is simpler than getting here and I was soon travelling the highway, fortunately I was still ahead of rush hour so traffic was not congested yet. I tried the autopilot feature of the car and was quite amazed at how well it performed. It kept the car perfectly centred in my lane and navigated the bends in the highway with no difficulty though I did find that a bit un-nerving! Having the car turn and not needing me to do it. But that will one day be fully automated, I guess.

Deas Island Park is a very nice open space to enjoy with a lot of water scenery along its length. The trail along the shore line is quite long and I am sure would offer many great views as one walked it. I need to return with a camera and no radio one day.