Overlooking Indian Arm and Buntzen Lake, this trail isn't a difficult one but does go for 15Km and takes some time to complete. 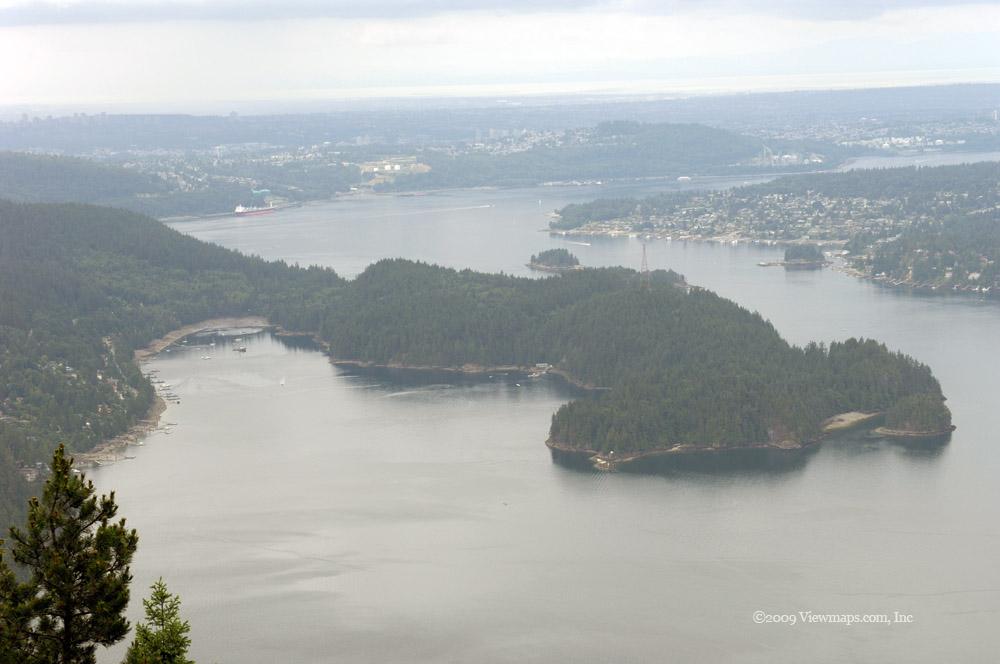 A few years back when I was not exercising regularly I hiked to the lower trail around Buntzen lake with difficulty. I said back then that I wanted to get to the point where I could do the hike with greater ease and even the higher ones along the ridge. So today's hike was the culmination of several years of dreaming and a determined exercise program. It was a great feeling knowing that one could achieve strenuous goals if one worked toward them.

The hike itself starts in the large Buntzen lake parking lot. Upon arrival we took a quick stop at the main beach area and then made our way to the floating bridge that crosses the south section of the lake. The bridge was recently upgraded and the actual floating section is now quite short. For most this is a big improvement but it came at the cost of much lost scenery in the lake. After crossing the lake we left the main trail that makes its way around the lake and started up the slope along the Diez Vistas trail. This first section of the trail is quite steep and continues this way untill you reach a lovely viewpoint of Belcarra and Bedwell Bay. Though not counted as one of the 10 views it was quite amazing already. I had high hopes for the actual 10 vistas! The trail continued up further and we soon came to the first of the 10 views. There were quite a few gathered at this point enjoying the sight as they reclaimed their breath.

I chatted with a few fellow hikers between taking my photos of the scenery, all felt the sight was worth the effort. After a needed rest from the climb we started out to the second of the viewpoints. This part of the trail was much easier as we were now traveling along the ridge line of the rise between the lake and the Fjord. The second viewpoint was also quite pretty and offered a slightly different view from the first. As we continued along we discovered that the remaining viewpoints offered less and less of a view as they were being over-grown from below by a new generation of evergreens. The last spots were completely blocked and no longer offered any view of the inlet. It's a shame to lose those views but nice that the logged trees are now recovering. I really do struggle with mixed feelings about where the proper balance should be between allowing nature to reclaim everything or not. It seems to me that some minor trimming of a very small number of trees would be worth the sacrifice if it would help to build a greater appreciation of nature in others.

As we left the last of the views we were surprised by a few drops of rain that followed us for most of the final sections of the trail. The north end of the trail was much like the south with a steep section where we descended back down to the main trail that loops around the lake. Once we connected with the lower trail we chose to follow it to the small suspension bridge that crosses the north end of Buntzen lake and then took a breather at the north beach. The drizzle had gotten a bit worse by this point and we decided to not stay long; so we pushed on to the car lest the rain start falling more seriously and catch us far from a dry haven.

So we started the final leg of the hike along the eastern shore of the lake. About half way back the sun came out stronger and the rain stopped for the balance of the hike. The trails around Buntzen are popular and we had many fellow hikers that we chatted with along all sections of the trail. I am glad there are so many out enjoying nature but it does tend to distract one from concentrating on the beauty of nature. So we finished the trail tired and sore but with more energy to spare than we had the time I struggled around the lower trail a few years back. I guess you could say I achieved my goal and now I can try a number of other harder trails in the summers ahead.