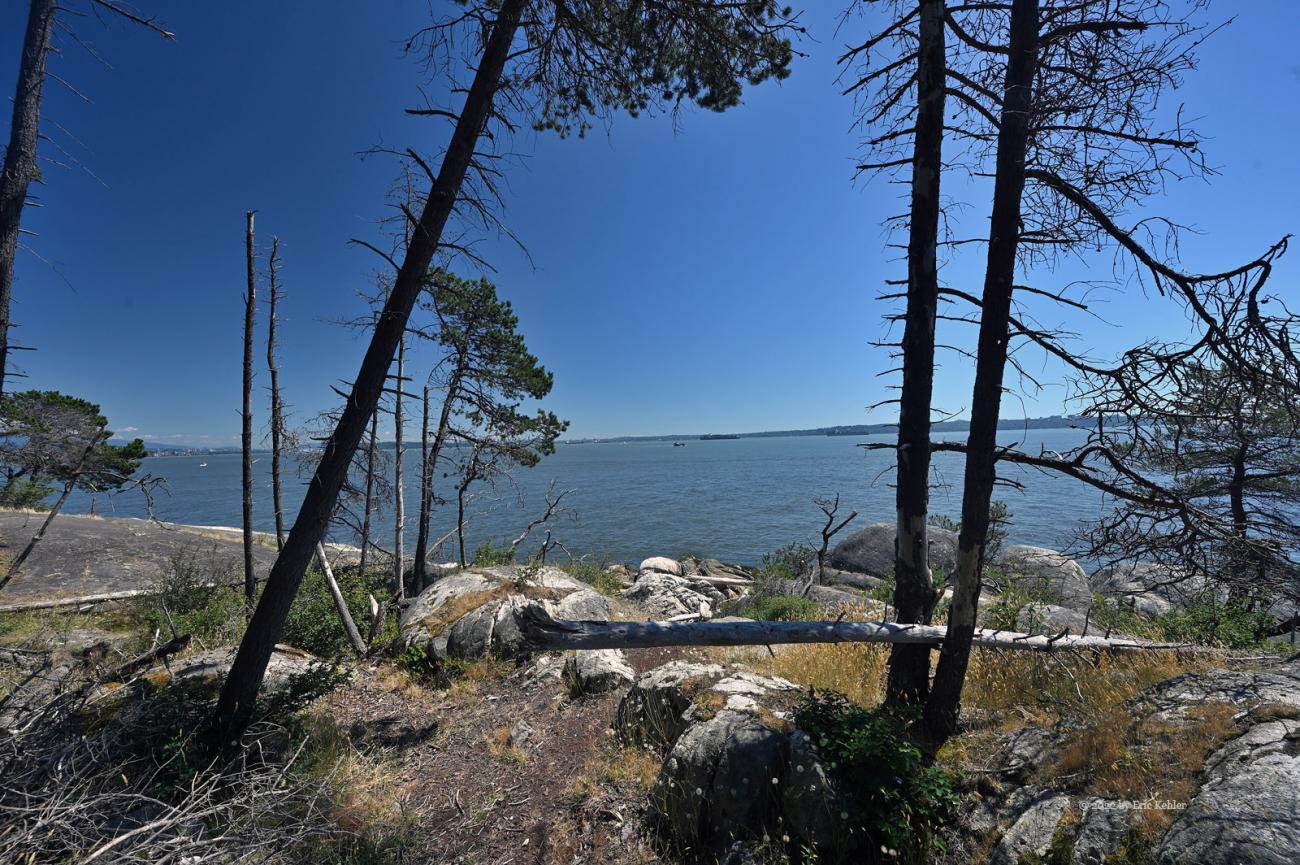 Lighthouse Park is one of my favourite locations to enjoy the beauty of the sea coast. I have wandered over most areas of the park and enjoy the multitude of adventures each location offers. On this trip I wanted to operate my radio from the beach and see how it performed next to the ocean. I planned to spend as much time on the shore as needed to get the required 10 contacts for the Parks on the Air program. This would be my 40th unique park which earns me the Platinum level Activator Award. Unfortunately, the bands have been in poor condition during the day and reaching stations may be a challenge. So, with some trepidation I set out for the park.

I originally planned to go on the Monday but the weather looked a bit questionable so I delayed until Wednesday. It was a lovely sunny day and the radio bands seemed to have improved. Joining me on this adventure would be my son Nick. He has always enjoyed Lighthouse Park as well and was looking forward to the fresh air at the point. We left the house around 9:45 and picked up a coffee enroute to West Vancouver. I hoped it would be late enough to miss the traffic back ups but the Cassiar tunnel area still managed to be congested and added 15 minutes to our drive. Past the tunnel we made good time to our exit.

Upon leaving the highway we stopped in at the Caufield Village Mall where we picked up some food for lunch. I would often stop at this mall as it is right above the park and for through traffic along the highway it is easy to get to in either direction. Having selected our meal for the day we continued down the cliff to the park entrance. Not much traffic along here at this hour and it made me expectant that  the park parking lot would have space for us. It did, I would say it was about a third filled, more than I thought it would be but certainly not like a week-end! I was able to move into a just vacated parking spot near the top end of the lot. A perfect location for our activities today.

Once parked we loaded on our packs and made for the trails that meander over the east side of the park. We took the summit trail and followed it down to the Valley-of-the-Giants trail which we then followed to the south end where it joins back to the Arbutus trail next to Eagle Point. A minute more and we were walking out into the open on top of the huge rocks that form the bluff. It looked like we were the only ones there at the moment and so we had our pick of locations. Nick spotted a nice area with trees positioned well for us to put up my small tarp That we next did and then hid under it out of the direct sun.

With tarp in place, Nick flaked out under it and settled in to eat lunch. I decided to set up my antenna first. Next to our tarp I hung my mast from an upper branch in the tree. It made for a quick deployment though on my first attempt the branch I had selected to rest the antenna on proved too weak and it snapped off. So, I raised it again selecting a slightly larger higher branch. The tree was dead and the branches quite dry and brittle. I then strung out the dipole wires and the antenna was ready. I finished the radio set up and turned on the radio, the noise floor was very low for a change which was nice. Now I stopped to grab a bite before chasing the contacts.

Done with lunch I checked the spots to see who was out there. I found an activator in Wyoming and called he responded and we both had a park-to-park in the log. I dialed in a second park, this one in California and worked him in short order. A few others I couldn’t hear so I selected a frequency and started calling. My first contact was an Alberta station in Lethbridge. He pointed out that I had posted my frequency wrong – stating 24319KHz rather than 14319. I fixed my posting and set the radio to auto call while I finished my lunch. It took a bit of time but I next had another Wyoming contact in the log followed by California. Now they were starting to trickle in.

A few more calls and then I had a chat with a chap in a Kayak in a California lake near Sacramento. He was using only 10 watts into a loop antenna only a few feet above the water. His signal was not the strongest but very readable and we were both happily impressed with the contact. Over the next 20 minutes I made a further 5 contacts and now had 15 in the log. It was a bit before 2pm and so I told Nick I would continue until 2. The band seemed to be improving but I didn’t get any more in the 5 minutes I continued.

Done with the radio I packed away the gear, I then took a few minutes to wander around the rocks looking for a few scenes to photograph before we left. Nick then helped me pack up the tarp. Next was the jaunt back up the trail we came on but this time it was mostly up-hill. While we were at the point a few groups wandered by but none stopped to chat. One group settled into a location just down from us to eat their lunch with a view. They ignored us but their ridgeback dog would wander over to us and let out a few barks from time-to-time. The return hike being mostly up hill went a bit slower than our outgoing but we still made good time and soon we were driving out of the parking area. The place had more cars in it now but it was still not close to being full.

The drive home landed us in the normal work-day rush hour though the car routed us around a portion of it. Where it took us just over an hour to drive there, the return trip was expected to take an hour 45! And that it did. The traffic was very slow down the cut and along the highway to the tunnel. It picked up a bit as we inched out eastward. But it was a slow grind. Overall, the day was a pleasant one in the sun the sea breeze very refreshing. I could just lay there longer to enjoy it but it would have to wait until the next time when I am alone.