A small park next to two other larger parks, but offers lots of grass and three playing courts
Category
Parks on the Air
2023 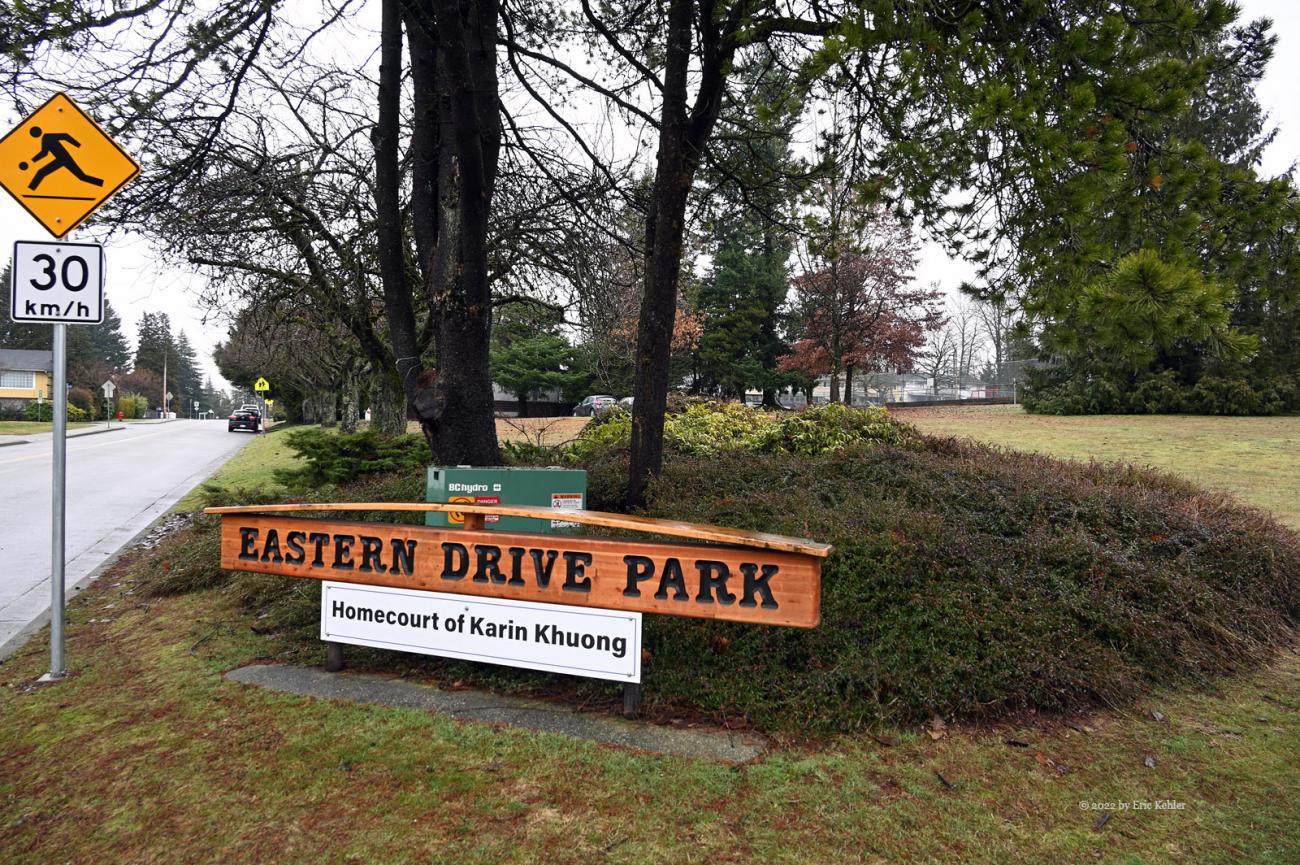 It was not a nice day weather-wise, normally the type of day where I would just stay inside and be warm. But Tuesday offered a brief respite in the rain during the afternoon – at least it did in White Rock. I had an order of some mounted pictures to pick up in Coquitlam so I decided I would pack my radio gear and see how things looked. The pick-up was close to the Port Coquitlam parks that I have been visiting and so it seemed to make sense that I would do a park after I picked up the photos.

I left home at my usual park visiting time of 12:30 and made for the store. I soon had the photos in hand and was considering the weather. It was quite misty but the rain seemed more related to the mist than actual rain. So, I decided to head on over to the park.  Upon arrival the mist was thicker on the hill but still only slightly drizzling. As a matter of caution, I decided I would operate out of the car for this session, though in nice weather the park offered a lot of open grass with trees for spreading out in.

The park has a small parking area inside its bounds and so I picked a spot next to the grass and set up my antenna next to the car park and ran the feed line into the car. It didn’t take long, I used one of the large trees in the park as a tie for one end of the antenna. I set up my radio in the driver’s area of the car and operated out of the passenger side. It actually worked better than in my prior attempts out of the back seat.

I had checked the band conditions earlier in the day and felt that the best North America wide coverage would be on the 12m band. So once the radio was operational, I reviewed the spots and saw that there wasn’t a lot of activity on the higher bands. Most of what was occurring seemed to be digital mode which was of no use to me. Being in the car I noticed a lot of interference on the 20m band but 12 was quite quiet, so that made my choice even easier. I also set up my noise cancelation unit to help with any car generated noise.

Initially I surveyed the spots for possible contacts and after trying to hear them I gave up as any I could hear were very faint and had numerous people working them. So it was bad news that I could barely hear other activators but goods news that there were people out there looking for stations. I picked a frequency on 12m and posted my spot and started calling. It took a while to get my first contact. It was a station in North Carolina, he reported that the signal was good, so I should be able to be heard. A few minutes later I had a station from Minnesota in the log and then Wisconsin. Things were going OK and after 15 minutes I had 5 contacts logged. But then things dried up.

Meanwhile outside the mist had turned to a more steady light drizzle, so it was a good thing I opted to work from the car. I decided to try the 10m band as it also looked to have good coverage but after 10 minutes for calling with nothing, I gave up and moved to 15m where I soon had two more stations in the log, including one of my regulars – VE3LDT from London, Ontario, he was very weak but I managed to understand him. He said he could hear me quite well on 12m but I couldn’t hear him. Things went quiet again and so I moved back to 12 where I managed two more contacts. I had now been operating for an hour and was one short of the minimum required to activate the park.

It had been a slow go for this activation but being only one away from success I decided to try the 20m band. It did have the most activity but also high noise from the car and/or local houses. I scanned the band for parks but heard little other than some pairs having a conversation. I picked a frequency and spotted myself, after 10 minutes I finally had my tenth contact in the log – a chap from Regina. Soon after I heard from a local in the Guildford area just across the river and so I had eleven. The rain was getting heavier and I decided that after 90 minutes of calling I had had enough and shutdown the station. I got the antenna stowed quickly and soon I was on my way home. It was now a bit later than my normal departure time and rush hour traffic was already building. The drive home took ten minutes longer than going.

The activation went ok though it was slow and somewhat harder due to being in the car and close to residential buildings. The rain likely attenuated my signal somewhat but I still was heard on the east coast. So, despite the weather, I managed to complete another park.