A lovely park alongside the Nicomekl River
Category
Serendipitous Discoveries
2023 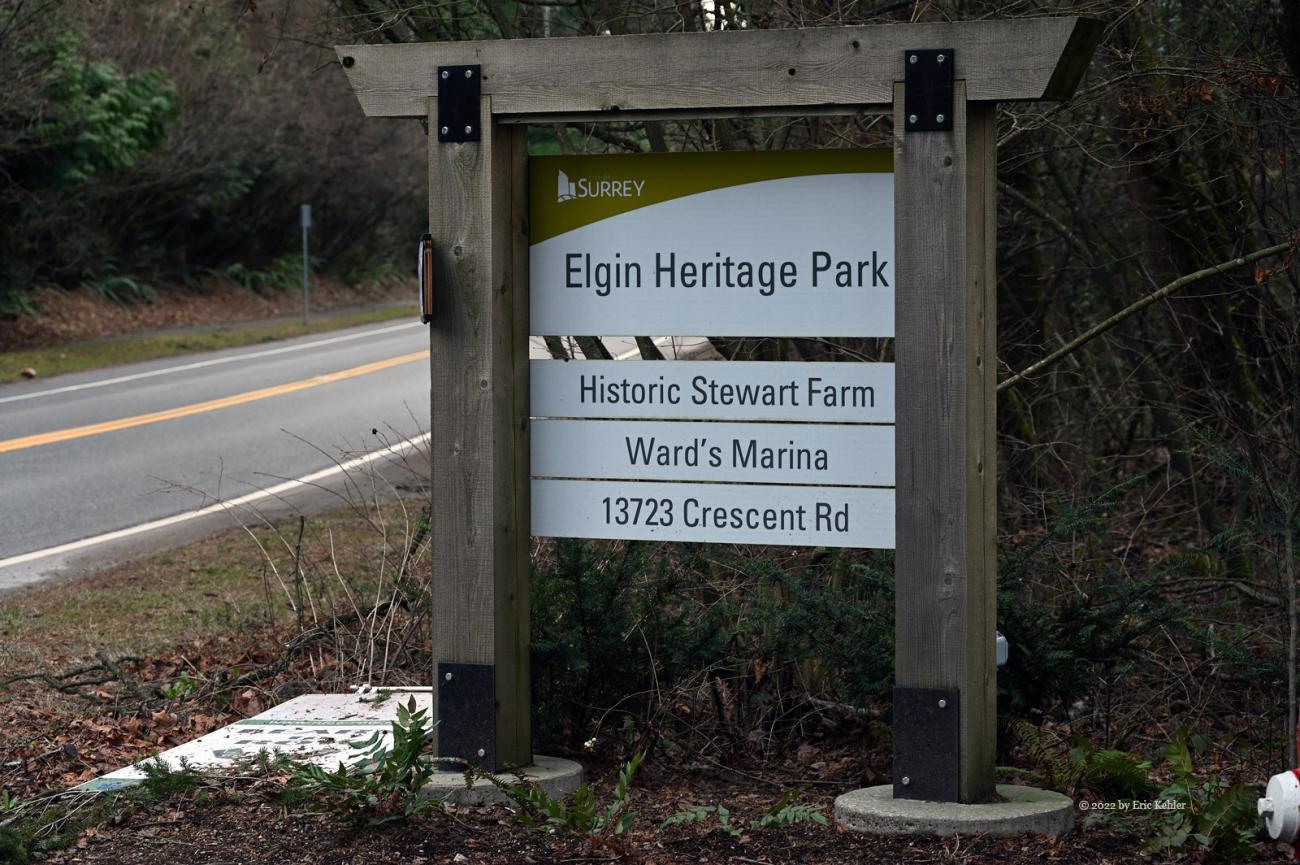 For years I have driven Crescent Road, passing by the park and thinking I should drop in there one day. I did visit the Stewart Farm house portion of the park for some wedding pictures once but that was a very limited exposure to the park. Well, though the day was a dull winter one, I decided to take some time and see what was there. I didn’t even bring my radio as this park is not on the list.

I arrived after lunch and parked the car in the overflow area near the farm house. This spot was closer to the water and trails than the main lot, which still had many open stalls. I got my camera bag and set off towards the river. I initially walked past the marina buildings and alongside the river leading to the small wharf. The winter look was a bit dull and uninteresting but it still gave a nice view of the river and showed the potential of what it would look like in the summer. There were a number of ducks swimming in the various patches of water which seemed moderately content with my presence.

I continued east along the river to the wharf and walked down it to where a gate stopped one from entering the moored boat section. The spot at the end of the wharf offered some nice mid-river views of the river and shorelines. The river is actually fairly wide in this area. I had no idea that it was that wide across as I normally encounter the Nicomekl further upstream where it is really a small creek like water way.  Leaving the pier I followed the gravel trail to the east side of the farm house where there are some old farm tools on display in and outside of a barn.  The path continued to the actual farm house and I walked up on the covered veranda. The house is open to the public but wasn’t today. I continued back through the parking lot to my car.

I noticed a trail leading west off the end of the lower parking area near where I parked and I decided to walk it for a bit. It looked like a pleasant trail through the trees. After 150m or so I pulled out my Gaia App on my phone to see where the trail went. It made its way to another parking area and then did a loop around some wetlands areas while following the bank of the river. It isn’t a long walk so I decided to follow the trail around the loop. I encountered a few other people on the loop trail who were enjoying the cool air. One elderly couple were in a combination wheelchair bicycle setup. The wife was being driven by her husband on the bike. They shared a friendly greeting as we passed on our opposite directions. I continued along the river front trail gathering a few photos.

One of the highlight photos was of a juvenile eagle that was perched on a tall stump only a few meters above the trail. He didn’t seem all that interested or concerned about me passing underneath him. The trail reaches a fork with one direction continuing south along the river. I took the shorter loop that cut through the center of the wetlands back to the parking lot. Here I saw a second juvenile eagle on a far tree. They were both surveying the wetland area and I guess watching the numbers of ducks that were wading in it. Back at the parking area I noticed only a single car in it. I passed through and started along the initial trail I came on to this loop. Soon I was back at my car. It isn’t a big park but it does have some nice spots for viewing wildlife and activities on the river. I guess I will need to return come nicer weather when things are green and lush.