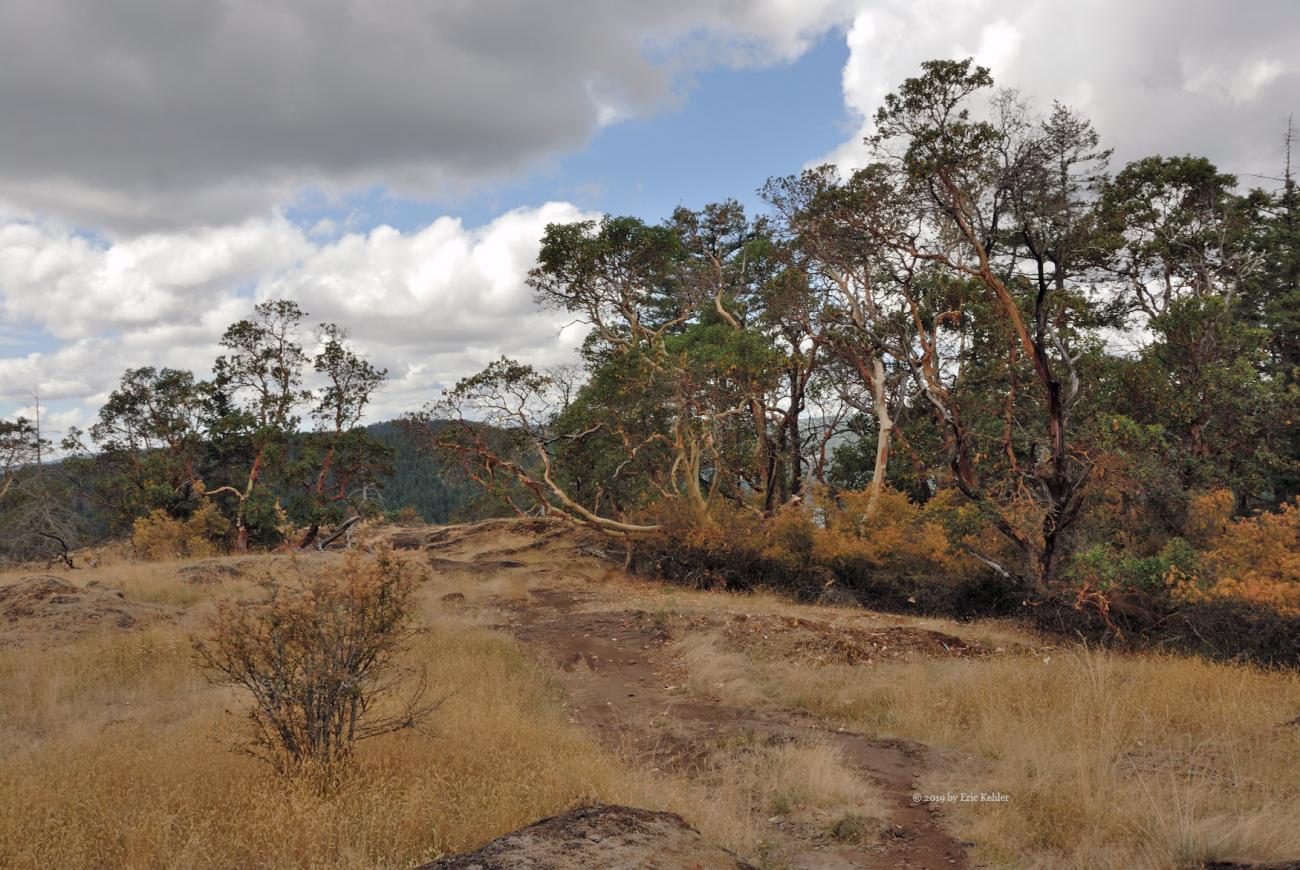 On my recent vacations to Victoria I added the challenge of doing a radio activation of various local mountains. I was trying to do some that are new to me and so this trip I had selected Partridge Hills as a candidate. I planned the route prior to leaving for Victoria and had decided that this summit would be a good fit for a morning adventure. There were many trails off of various roads that surround the hill and I selected one which seemed to provide the least amount of elevation gain. The drive was easy and only 30 minutes from my hotel, so the summit was a good choice.

After a good breakfast I got organized and left the hotel around 9:50 and with the help of Siri directing my every turn, I soon arrived on the road where I would be parking. Unfortunately there was a pipeline being installed under the road and I had to wait at three separate spots to continue through the various construction zones. But I eventually got through the last and found myself approaching the sought after trailhead. The road was climbing through a curvy section in this area and I missed seeing the trail on my first pass. I turned around and this time I saw a small narrow trail heading up the slope, so the trail was located but there was nowhere to park by it. Fortunately not much further along there was a pullout area where a few cars could park, so I pulled in and parked the car.

Once parked I got my gear on, it being such a pleasant morning, I set out in my shorts and tee shirt. Traffic was minimal on the road as I made my way back up the short distance to the trail I had spotted, I crossed the road and started along it. The first 50 meters of trail was quite narrow and a bit rough but then it broadened out into a very nice passage way and I continued up the trail slowly making my way to the summit. The trail intersected several others along the path I had picked and the Gaia map seemed a bit off in places but generally it gave good guidance. I encountered a few steeper sections but nothing difficult and soon I was in the summit area. Partridge Hills has many smaller peaks near the top and I chose one that had a broad flat area to operate from.

Once I had selected a spot to set up, I tried a number of spots to drive my walking stick in but the ground cover was very shallow on top of the rocks. Eventually I found a spot that would support the antenna with help of my backpack. I finished assembling the antenna and radio and put out my first calls. In short order I had a reply from a chap near Arlington who was flying in an older plane. A few more contacts in the log including with fellow SOTA member Mike, got me fully activated and now I could relax. I tried my wife back at the hotel but neither of us could hear the other. I talked via a repeater with a club member back home and though I could hear him on simplex he couldn’t hear me, so that contact didn’t work out. Having gotten the minimum number of contacts needed, I decided to stop and take time to eat a few bites. After a short break I made a few more calls before packing up the radio gear.

Done with SOTA, I decided to explore the summit area of the mountain and noticed a viewpoint to the west of me. The area was actually quite small and the distances short so I decided to head for the view. It was worth the effort and I enjoyed a nice view of Saanich inlet. I then continued along the trail as it curved down from the summit along a different trail then the one I ascended. Soon I was back on the original trail that ends at the road. I made my way down and before long I was walking the road to the car. A very pleasant little summit and the trees and open spaces at the summit area made it a very nice place to visit. I saw no one else on the trails while I was there though the trails themselves looked well used. A very nice open space to enjoy and worth a return trip one day.