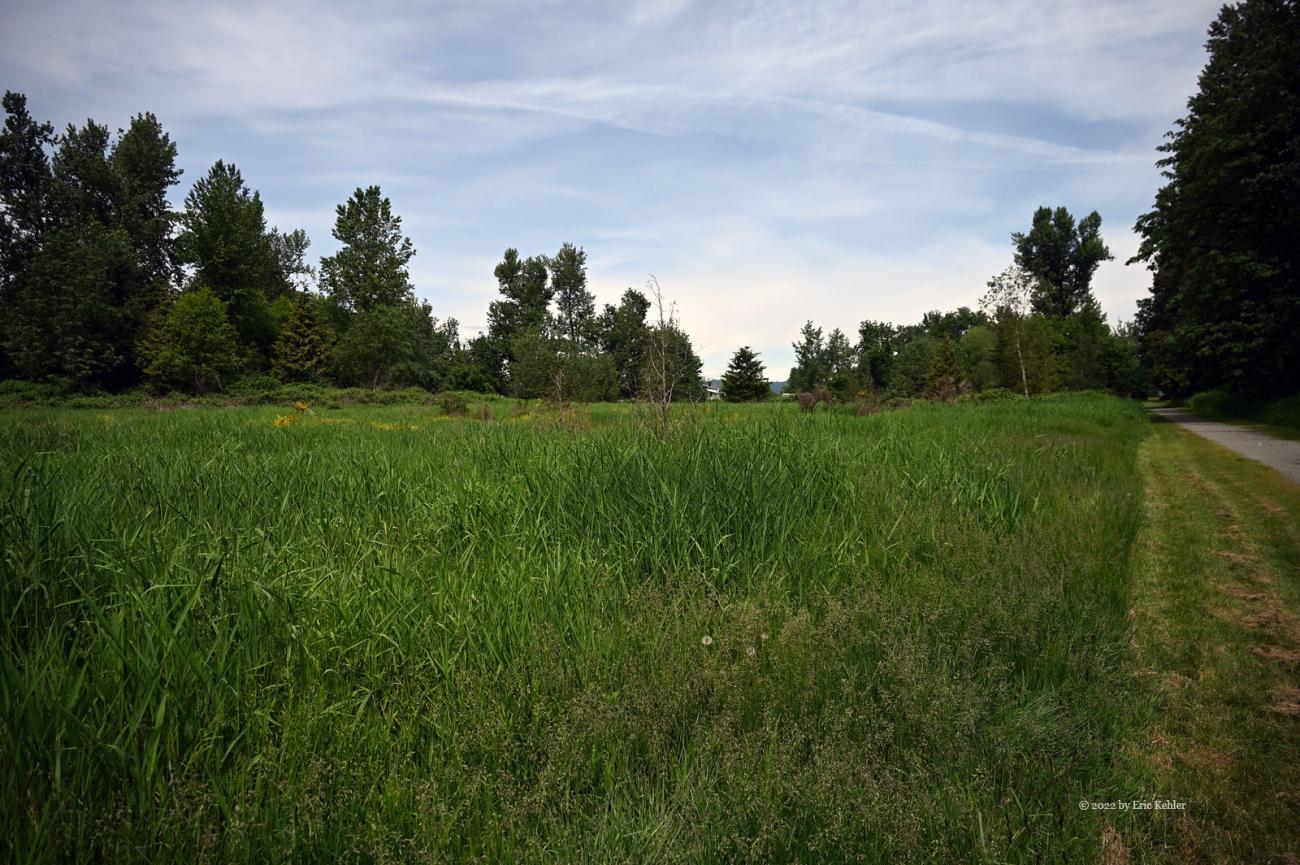 For today’s adventure I was originally planning on hiking a summit but my ankle let me know that it was not happy with the concept. So rather than push it I decided for a park adventure instead. As I was originally planning a longer outing, I decided to drive to a more distant park for the day. There are still a number of Surrey parks I haven’t been to but I think I will leave them for days when driving further is not possible. So, with that goal in mind, I selected this Abbotsford Park.

I made good time driving the roads to the park, following the path the car computed. I did run into a delay at one construction zone but otherwise it was clear driving. When I reached the park, traffic was light and the parking lot had around 7 cars in it, room for many more. I parked and got out to check over the site. I noticed that wide swaths of the grass were cut low leaving the central area in tall grass and other plants. The various signs talked about connecting trails and distances. This was obviously a park for walking not so much staying and picnicking.

After my cursory review of the area I decided to set up near the parking lot but on the far side from my car where there was a broader cut area. It was convenient to access as a gate was conveniently placed for access to a grass trail leading north-west from the lot. I stowed my gear in the cart and set out for the grass. It was fairly straight forward setting up here though some old blackberry branches tried to hinder my work. Once set up I dialed in the 20m band and started calling.

I had an initial response but generally going was quite slow and challenging. Those responding said my signal was coming in well despite an empty band. Some were complaining about the poor band conditions, so I guess I wasn’t doing too bad considering. A few other park activators came by and made a Park-to-park contact. I ended up with three of them logged. So at least there were a few other activators out there. As I time passed by and I was still short of the needed 10 contacts I moved up band to see if that would help. It made little difference but eventually a couple more stations came by and I had my needed 10.

During the hour I was operating, the sun was getting quite hot. I did have sun screen which I used but sitting in the sun got quite hot. I will need to change tactics for the summer and work in the shade.  It was so bright I couldn’t see the display on my phone. I had to get my tarp out to black the sun just to read the screen. But it was far too hot to stay under for long.

Since I was close to the parking lot a couple of people came by asking about my activity. One woman stayed for a longer chat and after her walk she returned for more details of how the signals worked. She has a friend out east who is a ham so this activity seemed quite interesting to her. After our second chat I decided to pack things up as I had been at it for an hour and had logged 12 stations. Not a great number but enough. Just prior to shutting down I scanned for a couple of park stations and called the one I could hear unfortunately they didn’t have good enough copy on me so rather than push it in the heat I shutdown and packed away the gear.

The drive home was without incident. I did drop by a Starbucks to pick up a cooler drink and as I was in Abbotsford, I dropped into Davis Meats to load up on some supplies for the next while. Traffic was picking up in places so I made a few detours around the busiest roads otherwise the drive was much like it has been for the 20+ years I have driven this way when returning from back-country adventures.