I had driven up the logging road on the mountain and driven past it many times so I was quite ready to hike up the top unexplored section to see what was there. 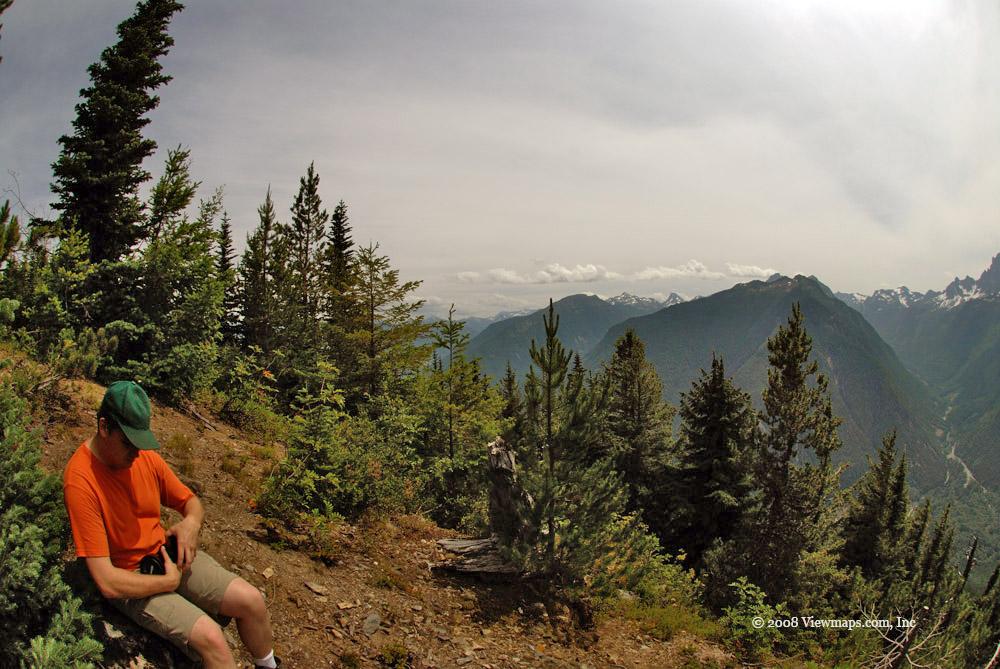 Ifirst explored the FSR on Ford Mountain back in 2003. Back then we drove up to the furthest passable point on the road and found ourselves deep in the heart of a moss encrusted grove of trees. There were a couple other cars parked near us in what was a small widening of the road – ideal for a few vehicles while their owners hiked further up the slope. We did get out and wandered around the immediate area and were amazed at the deep carpet of moss, the rich greens produced a powerful sensation of awe in us. I noticed a trail leading up the slope and decided then that I would one day return and hike it.

Well today – July 26, 2008 was the day I returned and hiked the trail to the Peak of Ford Mountain. The last part of the road had deteriorated and it was no longer an easy drive up to the same small parking area I encountered 5 years earlier. The actual widening at the end of the road was much as it was but the road leading there was badly washed out in places. It was exciting getting back here and as I now had my new Yaesu radio which I bought to use as a cross-band repeater, my first task was to set up the radio and antenna so that my hand-held radio would be able to reach Carolyn at home while we walked the trail. I have always been concerned about safety and having reliable communication should the need arise. In the back country the mountains and forest will generally make a hand-held usable only in open areas and on peaks with only spotty if any coverage along the way. I was hopeful that the repeater would enable me to have continuous coverage for the whole hike. So today’s hike was as much an adventure as it was a test of the repeater concept.

So I set up the portable mast and pointed the antenna west and then went to plug the radio into the battery only to discover it wouldn’t work! I didn’t have time to scramble so I switched power to use the power for the commercial radio bolted to the Pathfinder. Soon I was communicating with home and so off we went. I tested the link constantly as we made our way up the trail - to the ridge and peak. I did have good signal strength the entire way and was quite pleased with the setup though still uncertain about using a 2m yagi for VHF & UHF. It did work over this short distance but would it on a longer hike.

The hike itself was steep at the start of the trail but soon leveled off and the balance was a more gradual climb. The views were intermittent and partially obscured due to the thick forest we were working our way through. When we did finally reach the top, 45 minutes later, we had a lovely view of Mount Slesse to the south but the Cheam range to the north was partially blocked by the trees. We had lunch when we arrived at the top after which I wandered around a bit and was able to capture some lovely wild flowers growing just below the peak. I was fascinated by the bees busy moving from flower to flower.

From the peak the trail continues east along the ridge to a further peak – Williams Peak - several kilometers away. That is a much longer and generally an overnight adventure. So we started our way back and soon came upon a young couple making their way up. He was going strong but she was quite tired and not at all certain this was her thing. I did mention that they were almost there. As we drove off the FSR later we found their car near the start of the FSR! They had a very much longer hike then us and it was not surprising they were so tired. They did introduce me to a neat book on local hikes which I think I will buy so I can plan out more hikes.

The walk down went quickly and we soon came upon a second group. The radio worked well, and once to the vehicle we were able to pack it all up quite quickly and get on the road back down. I definitely proved the viability of the repeater concept but as to whether the antenna will work as needed is still to be determined. I hope to return here again and try the longer hike to Williams Peak - that should yield more opportunities for photographing the various mountains.