Our next area to explore was the Spuzzum region but on the way we found some nice sights in the Fraser Canyon. 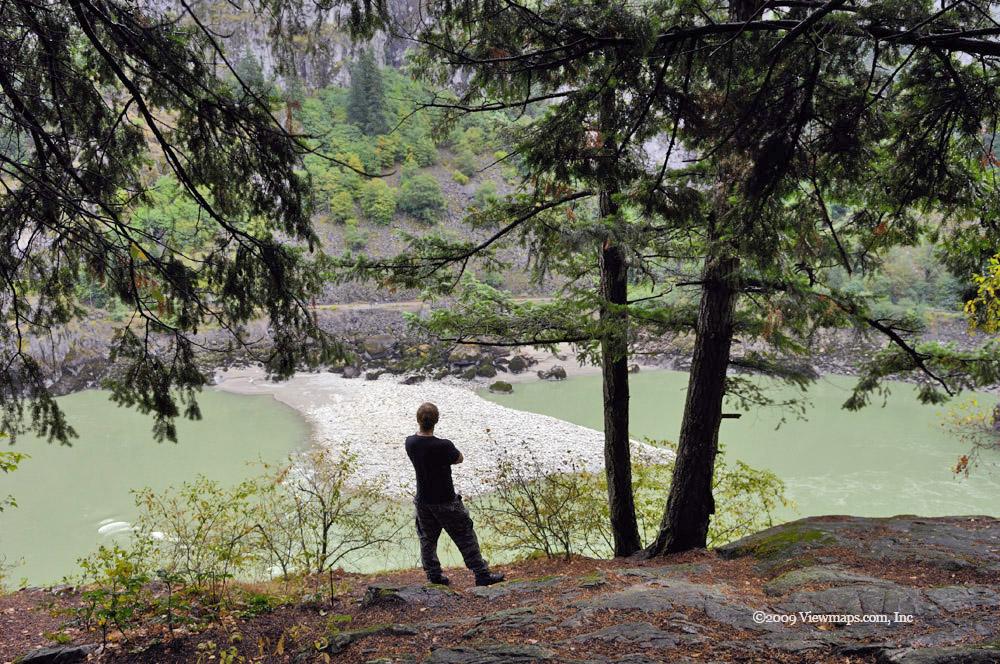 I have been slowly working my way up the Fraser River as we explored the back country. The next logging area is located just outside of the metropolis of Spuzzum. So Geoff & I set off to discover the sights of this region and to see if there was a possible connecting route through the hills to the East Harrison area. The day was partly cloudy which should be ideal for photography. I was hopeful it would stay bright for the duration of the drive and not turn to rain.

After we picked up some food for lunch at Peter’s Deli in Hope we started up the canyon but soon got dribbled on by some clouds. So I was starting to be a bit apprehensive about the day. Soon we came to a viewpoint along the side of the highway and we pulled off to explore its sights. The view directly from the road wasn’t very good, but a short walk along a well used trail brought us to some unobstructed views of the Fraser River. I grabbed a few shots while fighting the drizzle and then we made our way further up the canyon, this time stopping at a widening of the shoulder. Here we found a few more lovely sights but they all had some obstruction in the way. Geoff noticed that we were walking over a short train tunnel for the tracks that were hugging the river. He briefly considered going down to track level but everything was wet and the slope quite slippery.

We returned to the truck and made our way further up the canyon, we soon discovered a side road leading towards the river which we took. This road paralleled the highway for a couple of kilometers. Not far along it we found a pair of grave markers proclaiming the existence of a native burial ground throughout the area. A short distance further we had access to the river bank where we found a fascinating collection of smoothed rocks. Geoff went exploring across the various rocks to find some interesting angles for his photos. Returning to the truck we soon came to the end of the road where we managed to capture some more decent images of the river. We then carefully turned the truck around on the narrow lane and returned to the highway.

As we proceeded north, the highway made its way through a few tunnels and slowly widened the gap between us and the river, so our views of the river were getting scarcer. So we were fortunate that we were soon in the Spuzzum Indian Reserve with the town just around the bend. As we left the reserve the entrance to the Spuzzum FSR opened before us and we turned into it. Now we could concentrate on the back country and see where this road would go.

The map showed a number of side roads that looked interesting but when we came upon them we found them to be very over-grown. After passing by a few we decided to drive one for a distance to see if it opened up. After driving a ways and pushing back the undergrowth that was hanging over the road, we took some video footage of us driving through the tunnel of small trees. A bit further along we decided that the road would be best travelled on an ATV and so we turned around in a small widening. It was fun driving through it but the branches were snagging on our mirrors and antennas so we thought it best to stop before we broke something.

We came to a lovely viewpoint of a valley to our south; unfortunately it was obscured by a tall alder. Geoff got the urge to fix the problem and he got out a rope and made his way down the slope to the tree and cut it down for me. With the tree gone, the view of the valley was truly amazing and I was able to take a number of images. Now I had a new problem – too much contrast between the bright clouds and the green forest. I guess I will need to start using the High Dynamic Range techniques for these scenes. After our fill of the valley we made our way further west along the FSR.

After crossing a few streams and switch backs we came to a blocked section of the road. We decided to first explore the road that crossed the river here and see where it might lead. This side turned back east along the south side of the river but was much darker as the mountain was now blocking the sun. The ground cover and forest reflected the lower level of sunlight by growing heavier moss everywhere one could see. The road soon ended and we had to turn back. When we got back to the north side of the river and the obstruction that blocked our way further west, we decided this would be a good test of our new winch’s abilities.

We moved the truck into position, pulled out some line and tied it to the end of a large log. Then we started backing up. Once the line was taught, we couldn’t move the truck any further it simply spun out on the road – not great for our tires. So we decided to lock down the truck and pull using the winch. This was quite successful. Using the truck as an anchor we pulled that log right out of the way though it got hung up on a few small trees that we had to get past before we could complete the relocation. Using the winch for this was quite easy and went fairly quickly. Now I just need to complete our winch outfitting with a good snatch block and some chain for it. Once the log was moved we considered moving some rocks but it was getting late and the road past the blockage was overgrown and didn’t look like it would connect to the east Harrison so we decided to leave it for some ATV’s to cross.

We set off back to the highway. On our return we came across a couple of groups on the FSR – they were the first people we saw since we had entered the logging road. One was a pair of hunters; they appeared to be set for spending the night out here. We had had a decent day with the rain holding off while we made our way along the FSR but now that we were almost back to the highway the rain came and reminded us of how fortunate our timing on the road had been.

Once back on the highway we were soon in the town of Hope pulling into a parking spot so we could warm up in the Blue Moose Bistro. After a warm drink we set off for home having had a lovely day exploring the canyon and one mid-sized FSR region.