I had hoped to travel a loop from Garnet through to Emory Creek but are driving took us a very different way. 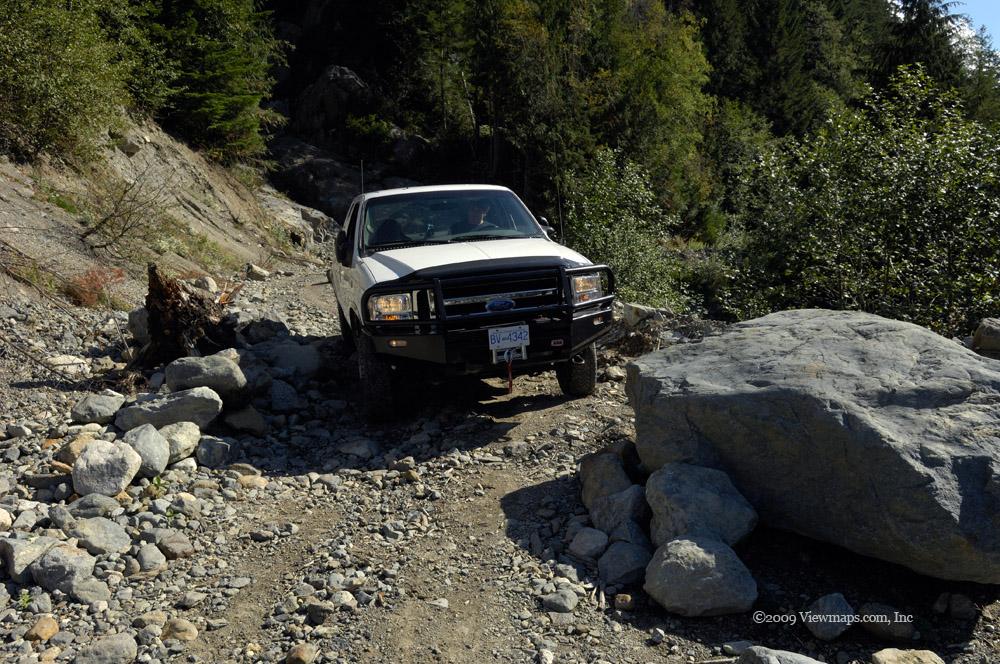 Since Geoff and I tried to connect back into Garnet Creek from Emory Creek FSR in the Spring and were stopped by snow, I have wanted to return to try it again to see if the pathway is drivable. So today Ethan and I set out to further explore the Garnet Creek region and see if the path to Emory Creek exists. First we planned to explore a new area – the headwaters of the actual Garnet Creek and once done to head back to where we believed we could follow the transmission line service road to Emory. It was a bit of a blustery day so once again I was cautiously hopeful that the weather would hold long enough for us to complete the trip. We set out for our regular coffee in Abbotsford and then on to Agassiz to pick up a lunch. Soon we were on the FSR and immediately came upon a forestry notice saying that a bridge at 10km on the Talc Creek FSR was washed out. I wasn’t sure why it mentioned Talc Creek so I ignored it.

We quickly drove through the first section of Garnet. I was hoping to get some nice waterfall shots at the rock face that borders the road but the water flow was so low there wasn’t much to see. Driving on, we soon were at the fork between American and the upper section of Garnet FSR’s. As we hadn’t seen the Garnet section before, we had planned to explore that area and return here to continue on up to where the connector to Emory Creek would be.

The first section of road was a bit overgrown with a couple of less travelled bridges but soon it opened up into a lovely valley with interesting rock formations and great views of the ridge line that was paralleling us along the valley. The road was continually climbing through the valley and provided a number of views to the creek at the base of the valley. We had a few drops of rain here which was a frustrating sign but we were fortunate in that this was the only rain we had while in the back country. While we were stopped for some photo taking I received a radio call from a club member and though deep in a twisted valley we were able to have a clear chat all the way to White Rock. The Ham bands were working well for us.

We continued westward up the valley and soon were into some rough road with several side roads. We decided to forego the side roads at this time and perhaps take them in on our return. As we drove I started to wonder just how far this valley went as it seemed to go on forever and was now past the marked road on the map. Suddenly it dawned on me that we were heading straight to Talc Creek! Now I was excited as we might be able to loop through to the East Harrison FSR and enjoy a view of the lake. So we kept driving forward over some steep sections and soon we were descending into a new open valley. It was looking very promising. But then I started thinking about that sign we passed at the start of the Garnet Creek FSR, would we get all this way and be stopped by that washout we were warned about?

We kept driving the lovely valley and the map was showing us getting close to the Talc FSR so we were very hopeful we would connect. Finally we were on the Talc and now we needed to know if we were above or below the 10km washout. It was not long until we noticed a 6km marker! that was a huge relief. I was now wondering if the two roads had a second connection which was above the 10km point. It does look like it will need another visit. As we made our way towards the lake we came to a landslide with some huge boulders across the road. There was a clear quad trail through it but we were in a long F250 and so the path may not be passable. Ethan & I both felt a bit let down – we hadn’t come this far to be blocked by a few rocks on the final stretch. So we analyzed the opening and planned our approach. After a few tries we made it past the narrowest point and then past the slide area. We were very excited at that. But another washout by a small creek soon came into view! This also took some planning and reties but we got past that as well. We certainly hoped there wouldn’t be any more as having to return through those sections was not a pleasant thought. But now a new thought came to me. I recalled that a couple of years back I had wanted to explore this FSR from the Harrison but we were stopped by a gate! So I was now worried that we may encounter a gate and not be able to get past it!

Alas we finally made our way to the gate and it was blocked open, there was the East Harrison FSR before us! We had succeeded in finding a loop trail even if it wasn’t the one we had intended. We quickly made our way to the lake where we stopped for lunch and a few photos – the wind was really blowing on the lake which added to the photos. As we ate a group of ATV’s came by and stopped to check directions. I chatted with them a bit – they were on their way to the Clear Creek Hot Springs for a soak.
After a rest and almost getting stuck in the sand on the lake shore we set off down the road – there were few campers this week-end coolness and wind seems to have chanced off most. We tried a number of side roads as we traveled south, one of these looked like it would give us a view of the Talc Creek area that we had just been on but the road was blocked by a rock fall before we got to a view point. I guess I could have hiked a ways but that wasn’t interesting me today. We stopped along the main FSR at a number of the regular scenic features and before long we were at the end of the FSR on our way to the town of Harrison Hot Springs.

It was a very fun drive with some significant driving challenges. We pushed ourselves to new limits with our new truck and were happy with how it performed. Ethan was excited to have made it through some challenging road hazards, I enjoyed some great scenery. But we didn’t get back to the connector to Emory Creek so I guess we will need to return to Garnet Creek very soon.