I selected this hike last year and have been looking forward to it since then, it was definitely a fun hike despite a few setbacks. 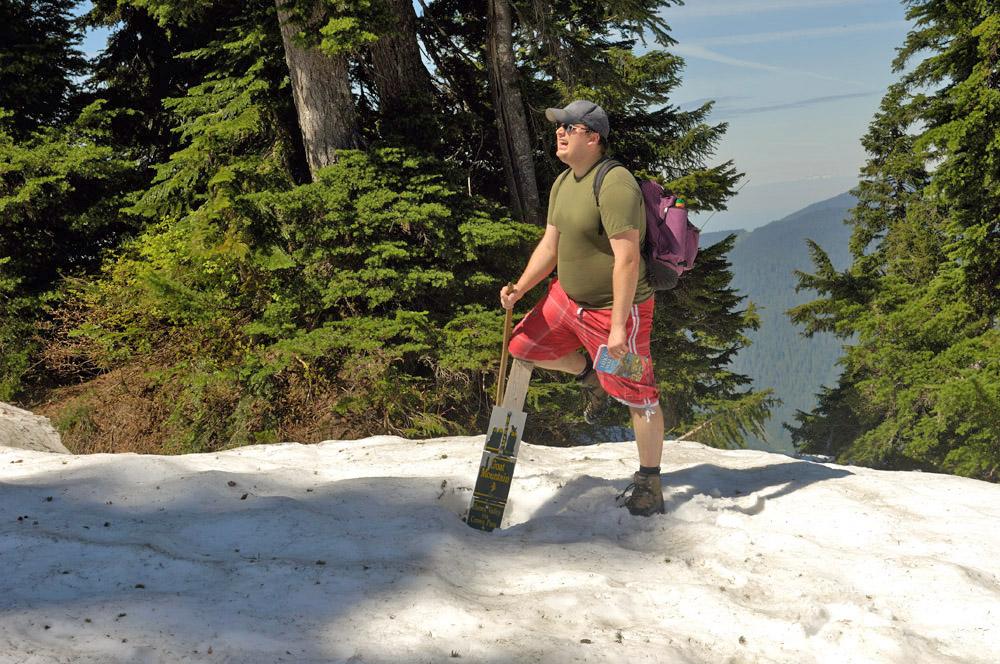 W
e set out for Grouse Mountain nice and early (at least for us), so we could get through most of the hike before the heat of the day. The drive to Grouse started poorly; as we pulled into the Cloverdale Starbucks I realized I had forgotten my wallet. So after convincing Ethan to pick up the tab we returned home and I grabbed my wallet. Then it was back on the road and off to the north shore. This attempt went without further incident until we got to the Capilano Suspension Bridge. Here we noticed an inordinate number of cars and pedestrians. The shoulders of the road were packed with parked cars. We were concerned that the parking lot was over-full and that we would have a long hike just to get started. Fortunately the lot was quite empty. It seems that the free roadside parking was being used by another event. So we were now parked and ready to buy our skyride ticket to head up the slope.

After parking and buying our tickets we crowded into the gondola and rode up the mountain to the ski area. After a few minutes getting oriented, we headed out along the paved walkway. I couldn’t find the trail book so we were going on feel and hoping we would find the right path. We stopped to look at the grizzlies before continuing along the path; fortunately I checked another pouch and found the book which confirmed our current direction. Our next task was to make our way around the side of the rise that forms the peak of Grouse. Soon we came to the tail head and sign pointing out the various hikes. It also warned that the trail to Goat Mountain was closed to Alpine conditions! That was not at all encouraging.

The first segment of the trail was clear and we decided to continue along until we could make a final determination. The trail made its way up the slope at a fairly steep rate and soon we were crossing fast flowing streams and walking over patches of packed snow. We came to the zip line tower which was closed, after getting our breath we continued on up the trail. Soon the snow was getting deeper and more continuous; at least the path was well marked by foot prints. We continued along slipping every now and again. We could hear water flowing beneath us at a few points! Fortunately we didn’t break through into a stream.

As the snow was deepening we came across another chap who was coming back, he had chickened out and not gone much beyond where we were. But others were on the trail and so we continued along. So far the trail wasn’t all that difficult and it was cool in the growing heat of the sun. Around this point we looked back at the peak of Grouse and had a good view of the back-side of the wind turbine which has been erected to supply a portion of the power for the ski hill. We also had a lovely chat with the guys back home via my hand-held radio.

We continued on the path as made its way up and bisected steep slopes – it really was rather a neat scene. Ethan zipped up the slope at one point to check for the trail ahead, on his way back to me he slipped and took a slide down to the trail. Though cool and wet it was a lot of fun and he repeated it a couple more times along the trail.

Soon we were pushing through some sections where the traffic was much less and the tracks were likely not from today. But at this point we could see the Peak of Goat Mountain so we just took one step at a time and pushed on. The way was steep in places but didn’t seem overly challenging – at least until near the end of the way up. The final 200m of the trail made its way up some very steep snow patches. Ethan and I tried to walk along the edge of it but we soon came to a difficult crevasse that looked a bit daunting to me. By this time another couple had caught up to me and found an easier way past this rock face. So I crossed over to them and we made our way up the other side joining Ethan above it. The final bit to the peak was not at all steep and made for a gentle hike. The view from up there was quite amazing and well worth the effort. We stayed for a good half hour – the other couple had flaked out on some exposed rocks sunning themselves. I pulled out my radio and enjoyed a nice chat with the guys at home.

After taking some photos and chatting with another hiker who had joined us we started on the way down. This time we came across a few more that were determined to make the peak and we gave them a few tips for the final section. The hot sun had really been busy with the snow and the sounds of the buried streams were now much louder and faster than on the way up. It was tiring walking through the snow but we made good time on our way down – the trail being very easy to follow! Even the very steep section near the peak seemed easy to traverse.

Once back to the zip line I was getting quite tired and needed some good rest time but we were close to the end so we pushed on and before much longer we were back to the trail sign where I signed in my return. The gentle slope of the trail to the main facilities was a pleasant place to get ones breath back. When we arrived in the ski area the crowds has greatly increased and many were gathered around a nature talk about Eagles with one big specimen on display. They really are huge birds when seen from a few feet. We stopped to hear the end of the presentation and then made our way back to the skyride for our trip back down.

The hike was a great success despite the snow and well worth the wait and determination needed to complete it. I hope the remaining peak hikes will be just as fun. Though we were quite worn out, the drive home went smoothly, but we were glad to be back and able to finally get a good rest –the hot tub helped as well.