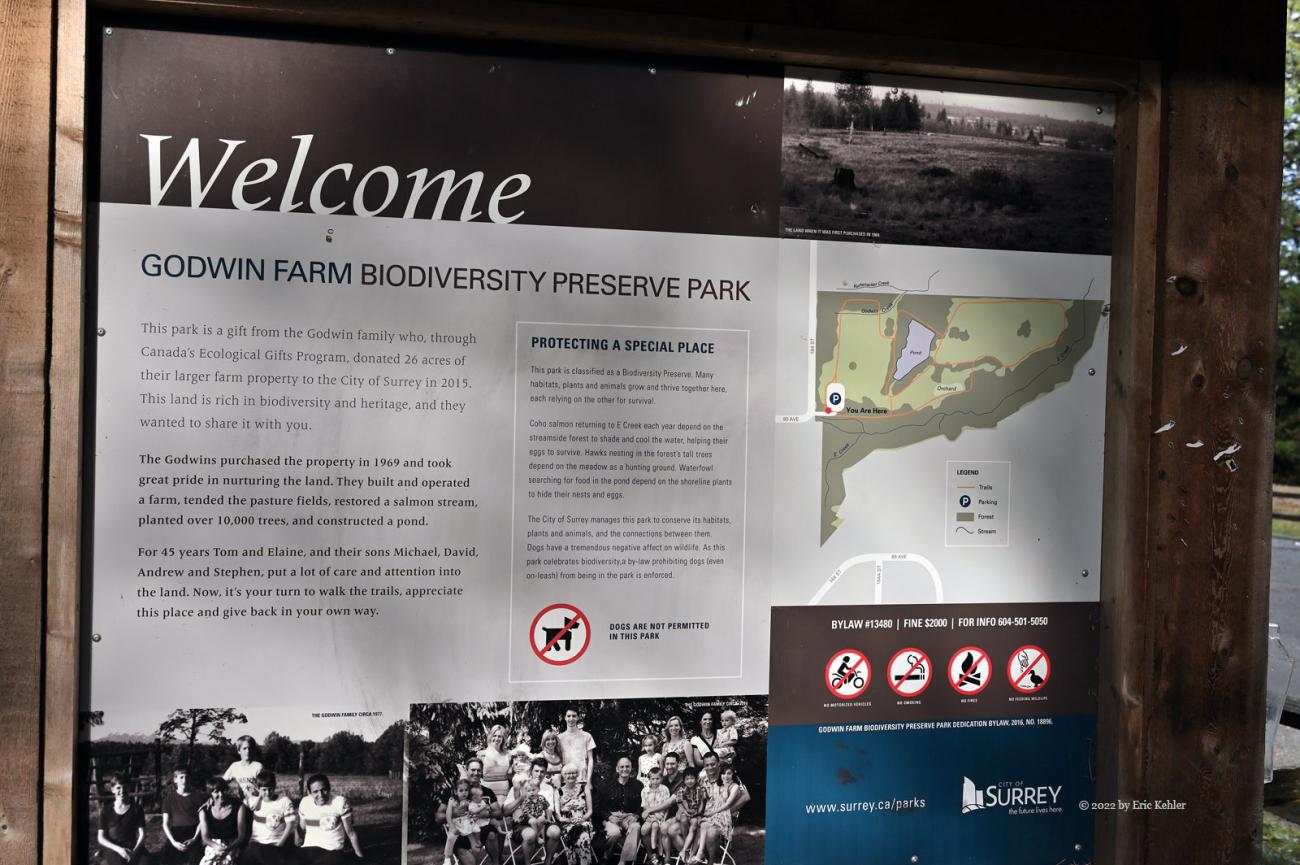 It was a lovely day for visiting a park and as Ralph had called to join me on an adventure, I was keen to go. I had one complication though; I had an appointment to have my car tires switched for the winter. The appointment was at 4pm so we had lots of time if we went somewhere closer in.  We could of course redo a local park but I am still trying to gain the next level in number of unique parks so a local one wasn’t that interesting. There are still a number in north Surrey which I haven’t visited so one of those would be a good choice for the day.

In reviewing the list, I came across the Godwin farm park. It seemed to be a decent size so Ralph and I could spread out. When Ralph arrived, I suggested Godwin and off we went to see what could be found. We made good time along the roads and soon came by the park entrance. Notices on the website said the gate is locked mid-week in winter. So we went unsure until we arrived what they meant by that. Fortunately, it was open and we soon were parked. There were a few other cars but generally it was empty. I noticed several signs about keeping dogs out! They are unwelcome here, of course I did notice a few piles of their presence along the walkway.

There were a number of walkways throughout the area and we decided to scout out the park before hauling our gear. The first sign along the way we came to pointed out the beautiful large western redwood grove. The trees truly were quite remarkable. We continued to a small pond where the fall colours on the trees looked great reflecting on the water.  We then cycled back to the car having selected spots to operate.  We also passed through a lovely grove of red cedar, quite different from the more common yellow. When we got back to the car we saw a young couple newly married who were dressed in full East Indian ceremonial dress arrive to get some photos taken.

We quickly loaded up our equipment which was when I noticed I was missing a fence post. I guess I left it behind at Castle Park. Fortunately, they are cheap and I have more at home. We then backtracked to a bench we passed while scouting that I thought would be good for my operation. While Ralph continued to his chosen location, I set up my gear next to the bench. Ralph continued past the pond to a bench he had spotted earlier. For my antenna, I used a tree for one end and crossed the wire high over the walkway to the mast and at the far end I used my one remaining post. It looked good. Now to check the band for spots. But I was not getting any internet access. The phone showed a single bar! I was not very impressed. I called Ralph on the 2m handheld and asked if he would spot me. He had better access and was able to do so.

Once spotted I started to get a few calls to my hails. It was much slower going today that last time, it took 20 minutes to reach 10 contacts. Likely due to my audience being busy filling their bellies with rich Thanksgiving meals. Once full, they seemed to be back on the air which was confirmed by one chap in New York! By 2pm when Ralph and I agreed to check in we both had enough contacts but felt we would continue for another 15 minutes. During that time, I managed another 10 contacts.  Today the contacts ranged from Connecticut and Florida on the east coast through Texas and Wisconsin, Ohio, New Mexico in the central areas to California and Alaska on the west coast. So, it was a full range of coverage for 15m today. By 2:15 we had both packed up and Ralph was making his way back to me.

We returned to the car and packed up the gear and made for home. The trip went quickly and I had lots of time to spare for my appointment. We both felt that the park was a lovely spot for a walk and we both planned to come again but without the radio gear just cameras. The number of interesting parks in Surrey are really quite surprising.