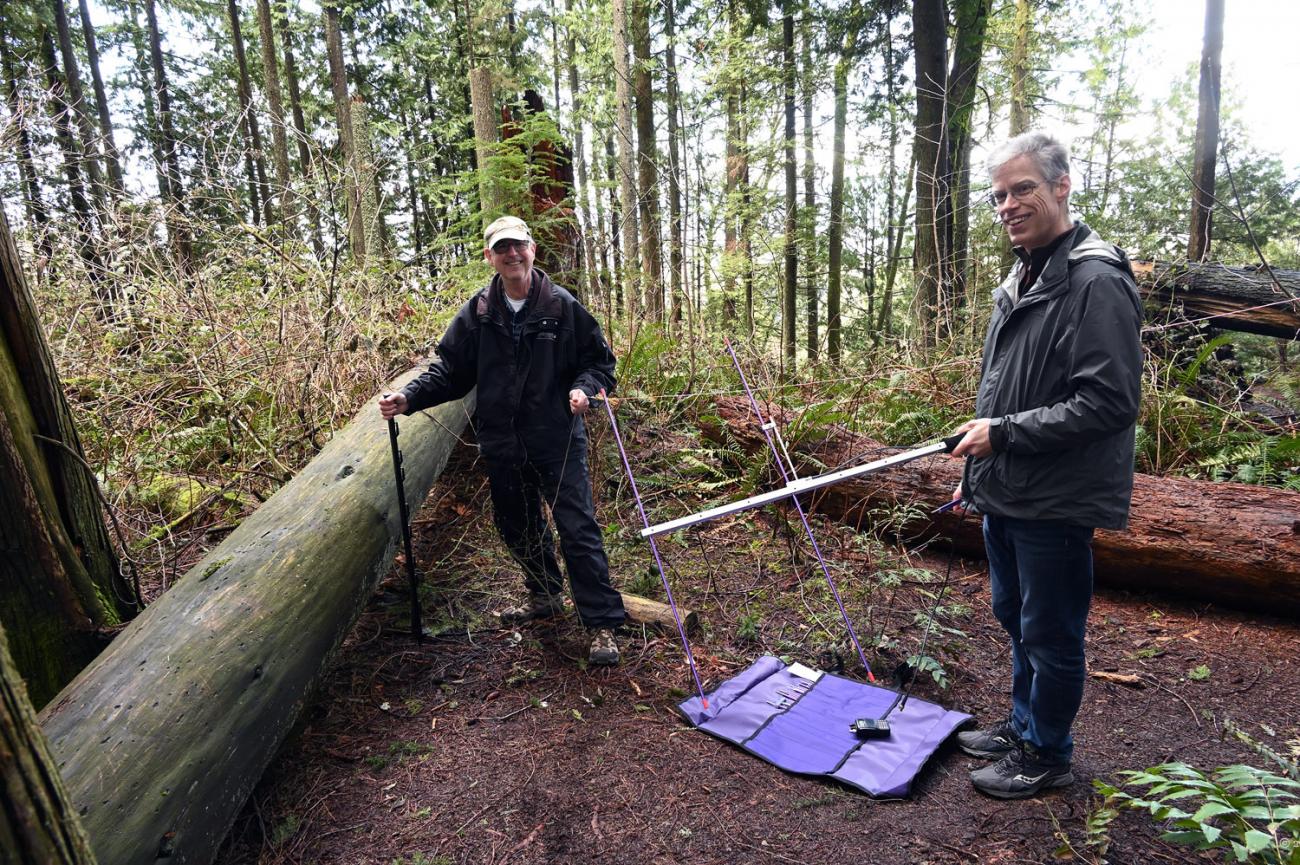 Grant Hill does not present a challenge to reach the summit, one must park the car before the gate and walk the 900m of roadway to the top. Though a bit steep in places the walk is fairly quick and uneventful, though one must avoid the crowds of cyclists making their way up. Still, it feels good getting out and enjoying a bit of fresh air and sun. This trek has become an annual one for Ralph and me. We come here when the snow still covers the higher summits. Today’s visit was different from our previous ones in two ways and they added to the adventure.

First off, I just took receipt of my new Tesla car and this was my first summit driving to a hill in the new car. The car is a lot of fun to drive and it made for an enjoyable drive to the summit. But being new and a car, I had to pick a spot alongside the road that was not too rough nor had a big drop. Fortunately, we were able to find such a spot not overly far from the gate. Ralph got out of the car to help guide me between two parked ones as I was still unfamiliar with its dimensions.

Our second change was the addition of another ham who joined us for the adventure. Scott (VE7CCY), he was just getting started in the SOTA program and was looking for some tips on how to best use his equipment. Scott had a handheld version of the Arrow Yagi that I use and a hand-held radio. I was using my usual mobile unit with a band-pass filter and Yagi. Ralph was on his KX2 operating 17m CW. Once I was set up, I put out a call and made my first contact, Scott then tried to reach the same station. His challenge was keeping the Yagi pointed correctly while talking and writing down the callsigns. Not an easy task. I showed him how he could fix his antenna to a pole for easier operation.

While Scott and I were sharing the 2m band we were looking for other SOTA stations out there as there was a Pacific-Northwest event going one with many summits being activated. The 2m band was surprising quiet, I guess they had all come and gone by the time we started, I did manage to work a couple of Summit-to-summit stations including Gabor (VE7JH) but not the numbers I had expected. Between me helping Scott and answering questions from cyclists coming by I ended up making only 8 contacts, but for SOTA that is more than enough. We did manage get Scott up to the needed 4.

During this time, I stopped to eat my lunch while listening for stations and talking to visitors. There were a few drops of rain while we were there but the day brightened as the afternoon came, though it was still quite cool at the site under the trees. Once we had achieved Scott’s fourth contact we decided to pack up as we were getting a bit chilled. The walk back down the road is always much more pleasant and we made good time down while the bikers were busy pushing the bikes back up the hill.

So, Grant Hill is in the log again for this year. The area looked unchanged from last year, the 5 cell towers were still there, the trails looked the same and the trees were still dense and towering above us. The fallen log I use to hold my Yagi seemed a bit more worn down so I guess time is affecting the place after all. Once back to the car we stowed our packs had a final chat with Scott before we went our separate ways. I think we will likely do more summits together as it is more fun with more hams around, even if we need to share the bands. The drive home was just as much fun as the drive out. I think I will really enjoy the new car – a techies dream car!