A large busy park, a fun place to visit
Category
Parks on the Air
2022 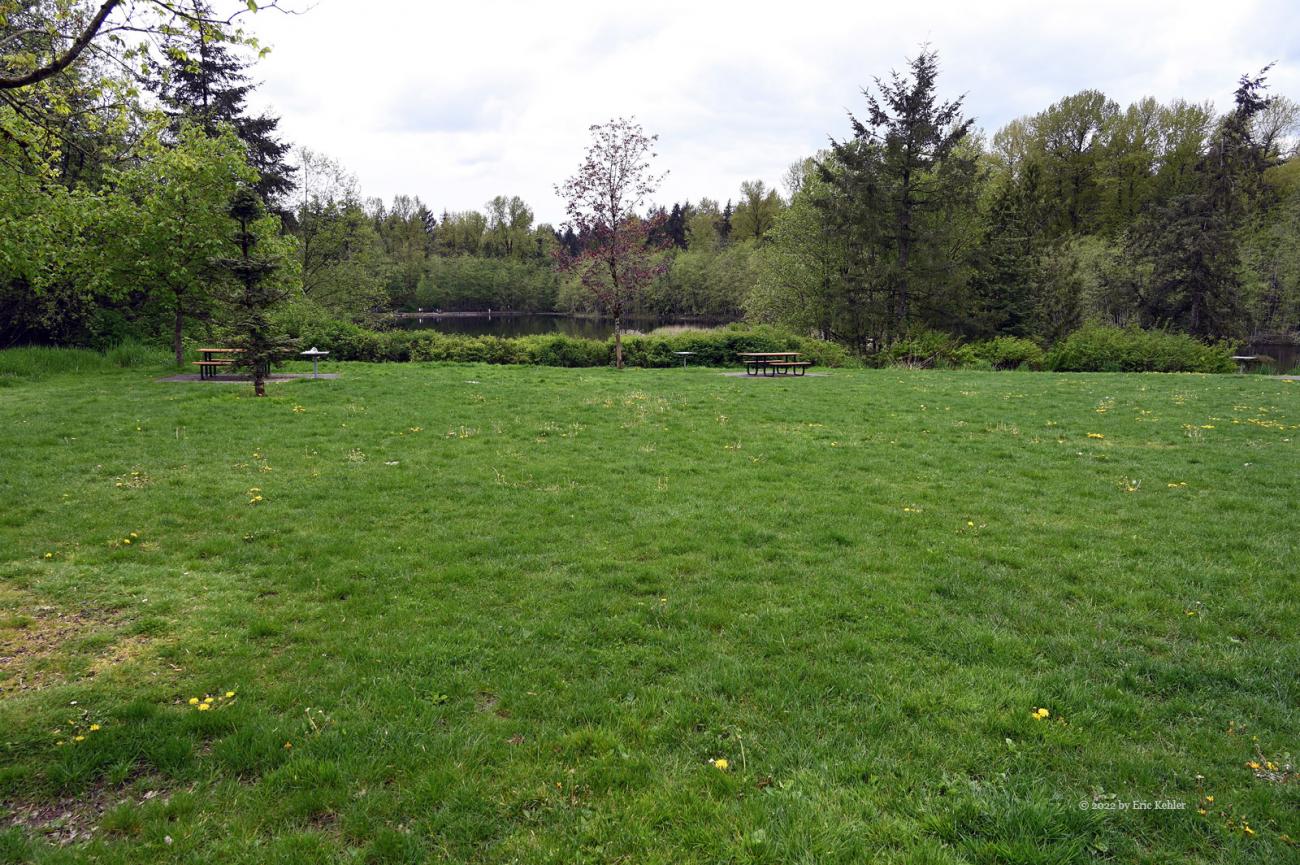 The weather looked good for the day and so Ralph and I decided to head out to activate another park. Hopefully with better results than the last trip we did. Today we selected Green Timbers. Neither of us had been there before though I vaguely remember coming as an elementary grade school kid to get a walk through a tree exhibit. That was more years ago than I wish to count, so let’s say I haven’t been here before.

Ralph and I left the house a bit after 12:30 and made good time to the park. We pulled into the parking lot to find it full. I was quite surprised to see the number considering it was mid-week.  I drove to the end of the lot and turned around. Fortunately, a car was pulling out of a spot as we came by and I quickly claimed it. Once parked we loaded up the cart and started for the trails. The main trail leads past some ponds and skirts a wide grassy area. When we arrived at the open space Ralph decided to set up just up from the path. The lower portion of the area near the path was quite soggy with all the rain but as we wandered up to slightly higher spots the ground was firmer. Having unloaded Ralph’s gear I continued along the walkway to an area of picnic tables.

As I arrived at the picnic area, I saw that only one was in use so I followed the path to the one best situated for operating and antenna deployment. Once there I placed my tripod and started to stretch out the dipole. I used a tree on the north-east side for the shorter element and my post on the south-west end. I then assembled the radio on the table and dialed in the 15m band. After spotting myself and calling for a while one of my regular hunters finally responded. I was beginning to think it was going to be another failed activation. I called for a bit longer but then switched to the 20m band and was able to find a narrow space in which to operate. The band was fairly busy so that was a good sign. After more calls I eventually started to make some contacts.

After logging 5 station a chap wandered over to me. He had claimed the next table and seemed interested in my activity. He introduced himself as Lloyd (VA7LAS). He was also a ham and had come to try and make his first park activation. He was planning on using very low power CW, much like Ralph to my north. We chatted for a while and then he went back to his table to set up. I continued calling and soon had another 5 in the log. It felt good having reached the bare minimum but I prefer to have a few extras so I kept calling for another 5 minutes or so and ended up with 14.  One of these last stations was a chap in Spain. So that DX contact was definitely worth the effort working.

Having enough contacts, I walked to Lloyd’s table and chatted with him some more. I offered a few tips to him as he was just starting out.  I do hope he made enough on his first time out. It can be very challenging being heard out there with only a few watts of power. I then returned to my table and packed up the gear. Then it was off to see Ralph who was waiting by the path for me to arrive. We had coordinated ourselves on the 2m hand-helds. The park was getting even busier by now even though the weather was blusterier and I even felt a few drops of rain. Ralph had made a few more contacts than me so we both felt good about the adventure and now we looked forward to getting a warm coffee.

We decided to go to the brickyard store as usual so we drove down Fraser highway to highway 15. And then turned off at the brickyard mall. Arriving at the store we saw that it was closed early for the day. We opted to back-track to the north Cloverdale store and there we were able to go in and get a drink. After a pleasant chat about the activity, we returned to the car and made for home. It was a good day out. The park has a lot of trails and features so it’s no wonder why it’s so popular. Much more than I like so it won’t likely be a park that I return to very often.