The Harrison area is vast and we felt another visit would allow us to finish some areas which time prevented last trip. As a bonus, Geoff wanted to collect some river sand from Silver Creek to do some panning with it as it seemed to have interesting yell 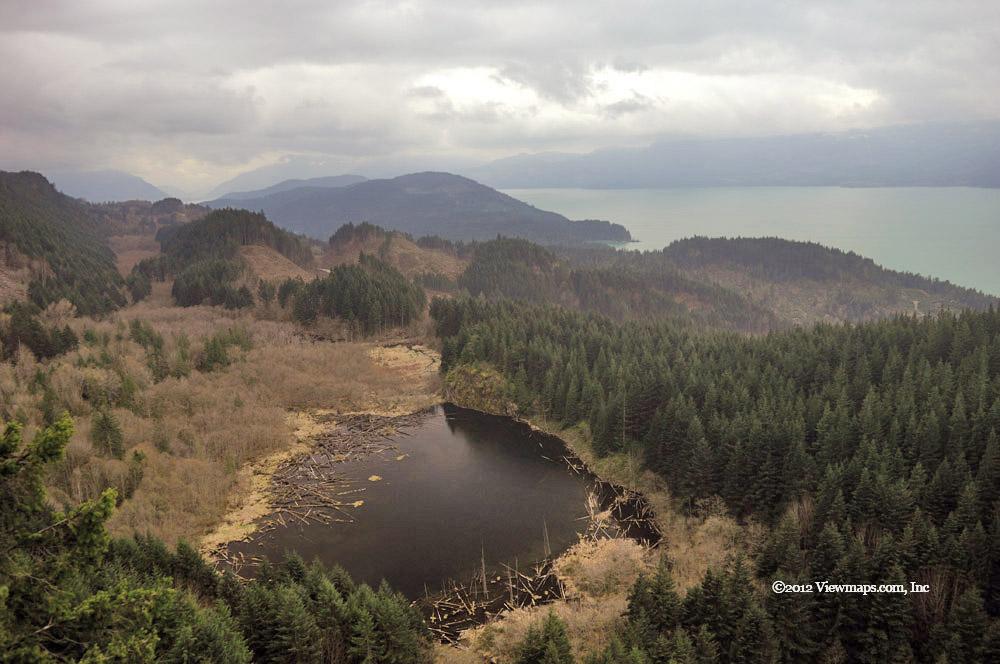 The Harrison area never fails to impress me, there are so many side roads, valleys and streams to explore and the loggers keep opening new places to see. The last two weeks we were on the west side of the lake so today we tried the east. On our last trip we stayed close to the start of the FSR due to a missing cover for our truck which limited our equipment. Today we were in good shape and ready to finish the side roads we ran out of time on previously.

Making our way down the mainline we soon found some cleared patches between us and the lake. There were a few shorter roads cut into the clearings which we drove hoping to find some nice views of the lake. These clearings didn’t seem to follow the standard pattern of logging and they left me with a negative feeling. The views were not great either and we didn’t find a view of the lake. There are some power projects planned for further up the mainline and perhaps this was part of the power line work. I just wish we could have found some nice sights through there.

Eventually we came by the exit to the Cascade peninsula camping area and just past it was the side road I had hoped to resume our exploration on. We turned off the mainline and made our way past a swampy section and then past the spot we previously ate a late lunch at. Now we were into new ground and quickly gained elevation as we followed the road. We came by a ridge where Geoff suggested we hike out along and see if a good view was available. It was a good call as we were soon enjoying some amazing views of Harrison Lake and the small lake and marshy patch we crossed on our way in. I was trying out my polarizing filter today and so I tried a number of shots while standing at the edge of a long drop. The view was quite lovely and I plan to return, it would be a great spot for a winter sunset.

Done with the cliff face we continued up the road and gained more elevation and came by a few more spots with great views looking north along the lake. The day was still a bit dull and misty so the colours were quite muted. It still amazes me at how the same spot can look so different with the time of day, season and weather. We drove a number of further side branches and eventually ran out of road – the highest branch stopped us with snow – so there is still more to see one day. We returned back to the lowest branch and turned up it hoping it would connect back to the mainline further north, it went for some distance but eventually it too ended leaving us with the need to back-track and rejoin the mainline where we originally left it.

As it was now getting closer to lunch time we decided to head on up the road to the spot on Silver Creek where we planned to do some shooting and where Geoff planned to collect some river sand. The last time here he had found some yellow flakes in the sand and wanted to collect a larger amount and bring it home where a friend of his would teach him how to pan it. So we drove pretty much non-stop up the mainline, glancing at the sights but not taking time to enjoy them until we got to the planned stop on Silver Creek. We did see that the gate on Hornet Creek FSR was open so we detoured up it for a few kilometers. There was active logging taking place so we decided to not continue on into the active area and so we returned to Silver Creek. Once we arrived at our destination we pulled out our kitchen and cooked lunch. Geoff did a bit of target practice and even I tried a few shots with his 22. I even managed to occasionally hit a can!

Done with lunch we hauled our camera and digging equipment out to the river. While Geoff shoveled sand into a large bucket I collected a number of photos of the river. It is a lovely spot with a small waterfall and rapids separated by a lovely icy cold pool. Even though the flow was still low, the river was quite powerful through this section. I can see why they want to harvest some of the energy. Across the pool and river there are the remains of an old footbridge. Two steel cables still hang in the air across the river. Once we were done with this spot we planned to climb up to the end of the bridge where some old timbers were still hanging in the air.

We clambered through the undergrowth as we made our way to the start of the old foot bridge. We found a few lengths of board still in place even though they were soft with thick moss growth. We also discovered that the bridge was anchored to a large stump! Perhaps it was a living tree when it was initially built but it sure looks questionable today. The cables were strung to a second stump as a safety backup! The old walkway was certainly a mess but we could see the steel cables used to hold the wood supports hanging out over the river still suspended by the main support cables. It would be possible to rebuild the bridge should any want a summer project. I just hope the anchor on the far side of the river is at least as solid as the stump on our side. I tried to find out some history about the old bridge but so far haven’t been able to locate any info on it.

Once we were done with the bridge we returned to the truck and drove back towards home. We stopped for a look at the main vehicle bridge across the Silver Creek we had used on the way up. It seemed to us that the current bridge is at least the fourth one constructed in that spot. The area seems to have been in use a long time and still a needed access route.

We next drove down the Silver Creek area to another side road – the Pine branch. We drove a small section of this on our last trip and today I wanted to finish it off. We drove each side branch as we came to it and from the end of the lowest and first branch we stopped to watch the heli-logging taking place across the valley. The helicopter had been parked when we drove by it earlier. Finally bored with the logging, we made our way higher up the group of side roads gaining some lovely views of Harrison Lake. We also were able to reach the repeater on Sumas Mountain and I chatted with Carolyn to let her know what we were up to. The highest branch started to be covered in patches of snow and soon we came to one about 100 feet long. We drove into it and got about a third of the way before being stopped. Unfortunately the ground was also soft so we could not reverse out either. Our only solution was to winch ourselves forward until we cleared the snow.

The winching process didn’t take all that long but we had an interesting time doing it. As the stump we had selected to tie to was a fair ways from the truck we decided to extend the line with a pair of recovery straps. When the winch line grew taught the truck still refused to move – instead the straps were stretched a bit until they had built up enough energy to yank the truck forward a couple of feet. This happened a few times before we regained traction and were able to drive the balance of the way off the snow. Once the gear was packed up we continued up the road and came by increasing amounts of snow eventually we were stopped by it but saw a large number of additional branches that we will need to come back and explore.

So that was our day, the return through the snow patch was easy as the ruts allowed us through without getting stopped. Done with the side road we soon were back to the mainline with an hour until sunset. As we wanted to be off the FSR before dark, we made for home without much sightseeing. The drive went quickly and we were soon on pavement having beaten the sunset by a few minutes.