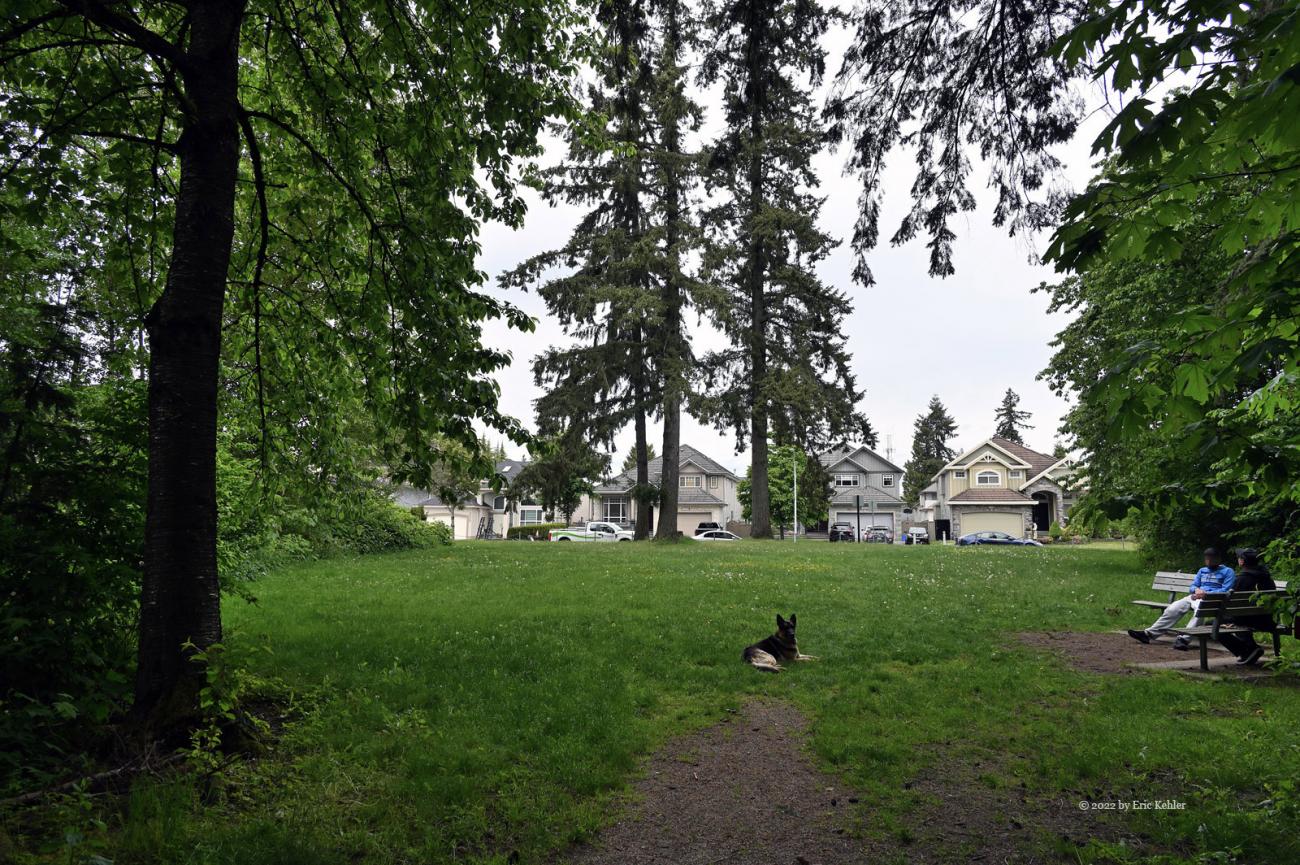 It has been over week since I returned from my Victoria trip and I hadn’t been to a park since. I had planned to go out last week but yard chores got in the way. So, when the early afternoon looked good for Thursday, I snuck out and made for the small park. The forecast said that rain was coming in mid-afternoon so I didn’t want to waste any time getting there and on the air.

Upon arrival I decided to walk the area to pick the best site to set up my station. The park has quite a few mature trees surrounding an open grassy area.  Against one side are a pair of park benches. On the top of one tall stump is a carved statue. When I arrived two chaps were sitting on the benches in deep conversation. They had a friendly German Shepherd dog which came by to great me. I gathered a few photos and then headed back to the car after chatting with the two about my activity.

I set up the antenna on the west side of the open grass area. I hoped that leaving some distance between the antenna and the eastern line of trees might help the signal get out better. I saw that the band noise wasn’t too bad here so I dialed in the 15m band and spotted myself on the list. Then I started calling I soon had a few in the log but then things stopped. After 10 minutes of failed calling, I decided to move to the 20m band and there I scouted for an open frequency.

On 20m I had a few more quick responses and then it slowed down. After 10 more minutes of calling I finally reached the 10 contact point. I decided to keep going for a while longer. Meanwhile The chaps across the field had lit up with Pot and I was down-wind. It didn’t take long for me to develop a sinus headache from the smoke. Shortly after they were joined by a few more friends who also indulged. I persisted and kept calling as I wanted a few extra contacts in the log. Around this time the shepherd came for a visit and got tangled in my Coax and almost pulled over the mast. His owner quickly came by to help with the problem. I then resumed calling but responses were far between.

I decided to end calling so I could review the spot list and look for another park activator to contact. I found a station at a park and dialed in the frequency, he was quite loud into my site and so I gave him a call. He immediately picked me up and we had a park-to-park in the log. Done with the other activator, I packed up the gear and set off for home. A couple of kilometers along I noticed a thump sound as I was driving. I had picked up a large bolt in my tire and it was now slowly leaking air. I was able to drive home and then to a tire repair place. Unfortunately, the hole was quite wide and they weren’t sure their fix would hold. So, I will need to monitor it for a few days.

It was a pleasant quick outing between rains which started shortly after I left. The only big negative was the parting gift to my tire.