Always a pleasant mountain to visit, even without a view
Category
Serendipitous Discoveries
Summits on the Air
Parks on the Air
2022 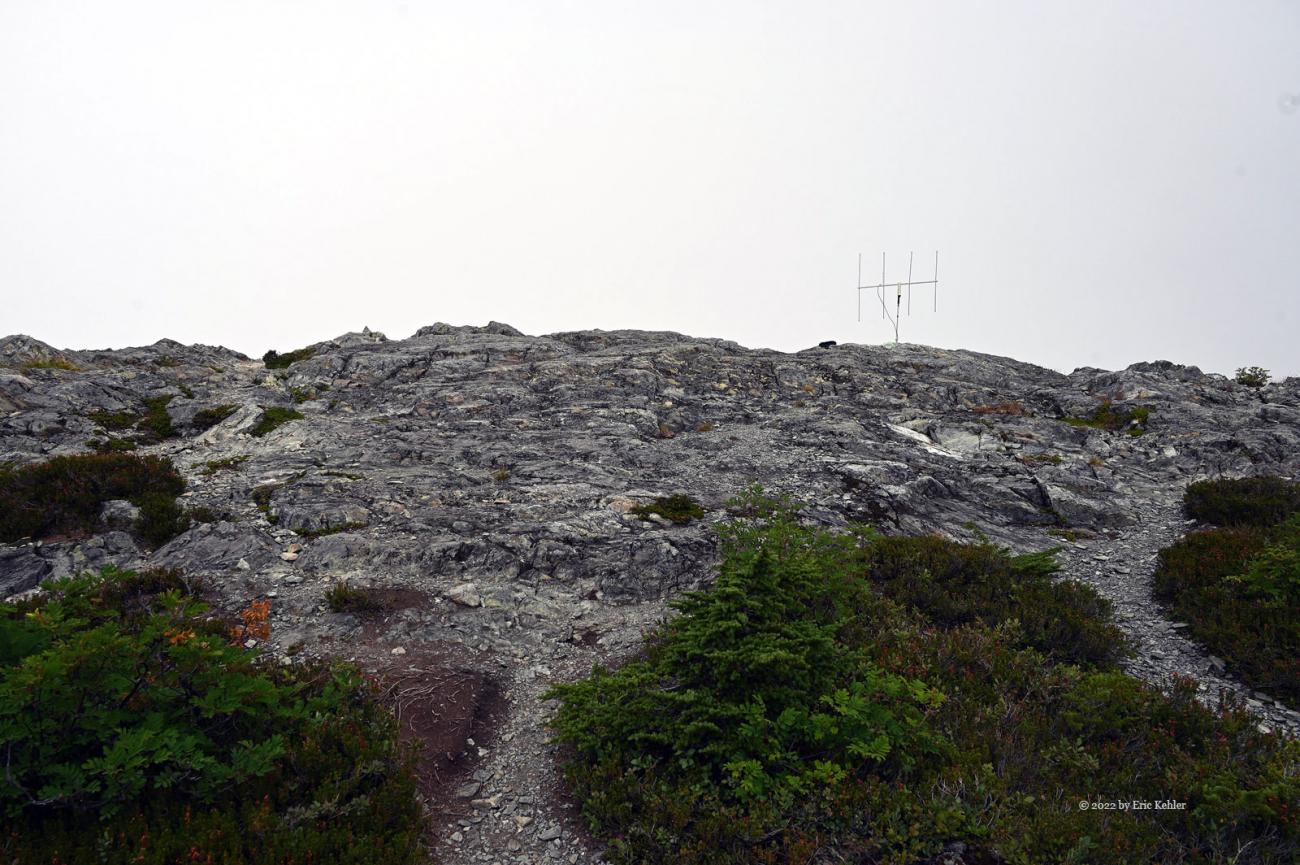 Two down two to go, so it goes with the annual four summits of Cypress Mountain. I had just completed Black Mountain and the week-end ahead looked like another ideal one for a hike. Over the week, I watched the weather report slowly change from rain to possible rain to unlikely rain for Saturday. Come Saturday I was up an hour early as I wanted to start hiking at 10am while it was still cool and reach the summit for 12:30. The drive went smoothly and I made excellent time arriving on the summit a bit after 9:30, after gearing up I was ready to set out at 9:45 and so I made for the summit.

The sky was overcast but it wasn’t a heavy one, up slope I could see clouds moving across the route and so I figured I would be walking through damp mist before long. It being cool, I was making good time up the service road which was the route I selected for the day as it wasn’t overly steep which would be better for my ankle and knee. With my shortened gait and the cooler air, I didn’t need to stop much and I reached the airplane crash monument in an hour. A short rest there and I continued up the road. To this point I had seen only two hikers on the trail, one coming down and the other passing me on the way up.

The last portion of the road went quickly and in 30 minutes I had reached the south summit. Another 30 and I was on the north. Two hours was a personal best time for me. There was a group of four on the summit when I arrived and when I started to set up my radio, they came by to ask about it. As I was still 30 minutes ahead of my schedule, I took some time explaining the SOTA program to them and other virtues of amateur radio. Then they left the area and I had the summit to myself. The summit area remained empty except for me the rest of my time on the summit.

On the summit I was draped in cloud but not continually, it came and went as the wind moved, at times I had some clear views of the clouds above but the lower cloud never cleared for me to have a view. I started calling around noon and soon had 4 in the log and then 10. I had enough for sota and pota. They were all made with in a 10 minute span. Having enough I stopped to eat lunch after which I started up again and added another 12 to the list. I was not in a hurry to leave as there was another sota activator doing both Saint Marks Summit and then Strachan and we hoped to meet up. I kept the radio going and slowly added the last of the calls to the log.

It had reached 1:30 and though I had heard from Bruce (VA7SGY) he was slowly making his way up Christmas Gully which ends at the col between the two Strachan summits.  I decided it was time to  pack up and descend to the col where I could wait for him just as easily. So, I loaded up the gear and started down the trail to the col. Upon arrival I immediately wandered over to where the gully trail pops up through the brush and I heard some movement not far below. I looked around and found a nice rock to sit on and there I planted myself for a moment. Soon I saw Bruce’s hat through the shrubs and I called out to welcome him to the col.

Bruce finished the trail and came and sat with me to rest awhile. The gully trail had been a very steep and difficult climb, I remember how steep it was when I descended it with my son a few years back. I vowed never to return to it! Bruce and I chatted a bit he told me that we had previously met at the Langley radio club where I gave a presentation on SOTA. It got his interest and he has been greatly enjoying the pursuit since.

After we had both regained our strength Bruce continued up to the north summit and I climbed to the south and then started across the ridge. I met another pair hiking at that point they asked about the north summit and I pointed the way and encouraged them along. I found the road and started down. After the fourth switch back, I was descending the road at a steep point when I heard a rustle to my left up the slope and when I looked over I spotted a juvenile Black bear hugging a tree. He was looking at me wondering if he needed to climb it for safety. I continued down the road and he eventually decided it was safe and he scampered further up slope away from the road.

I soon came by the main construction site for the replacement of the upper chairlift. A couple of workers were there busy with the project. I continued along the road to the upper end of the main lift and there I took a breather before the final descent.  The last section of road went without incident and I was finally able to get some views of the area and so I stopped to gather photos. I was back to the car in by 3:20, it taking  an hour and a half from leaving the col. So another decent time.  Now for the drive home. The highway was backed up again descending to the ironworkers’ Bridge and the navcom indicated a travel time of and hour 15. I arrived home right when it estimated.

It was a lovely hike with lots of contacts, though I had few views. It was a bonus to meet a fellow activator on the trail especially one whom I had encouraged to get started in it. I was very surprised at the low numbers of hikers on the trail, usually there are a few dozen but it just added to the serenity of the place. Now to wait for the next decent Saturday for hike four.