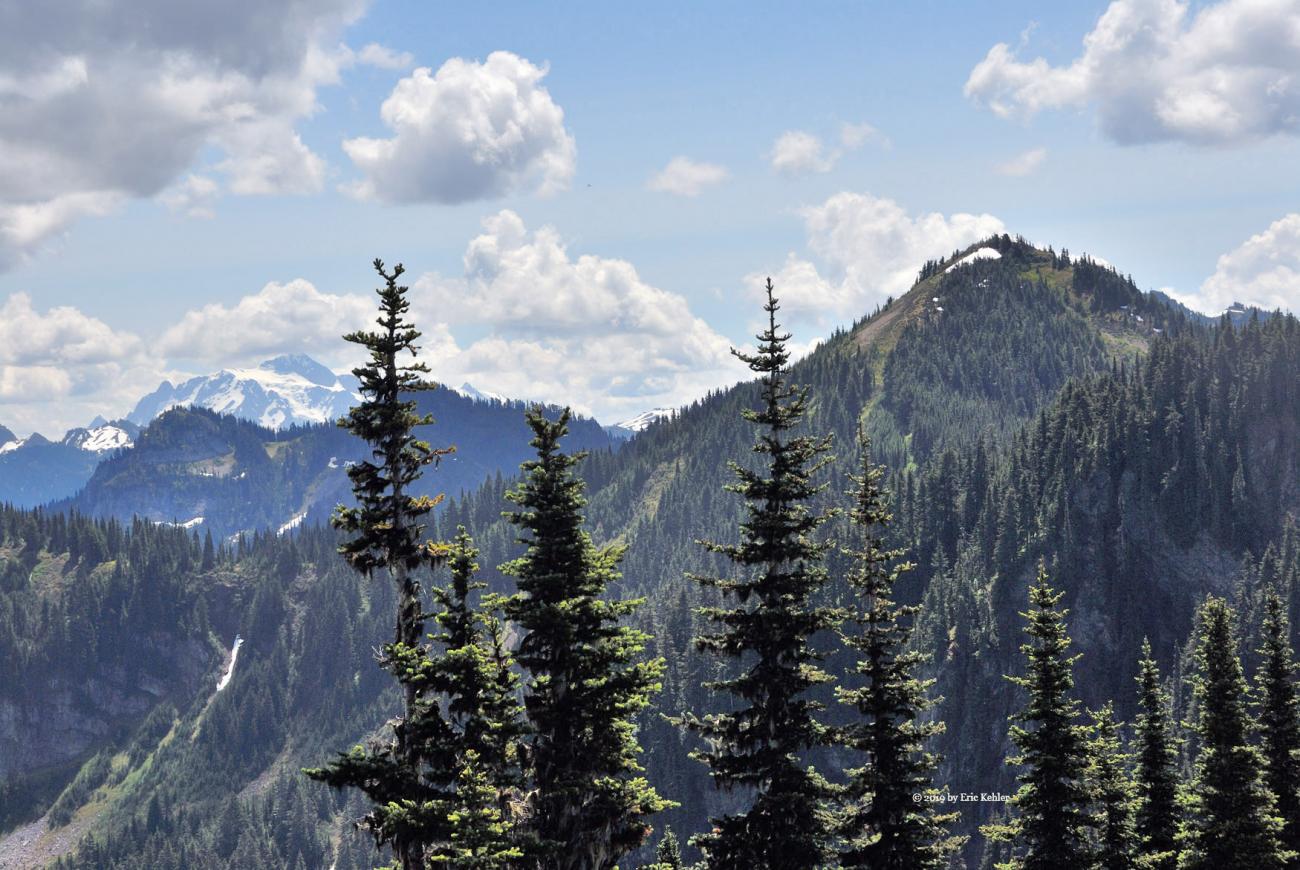 There are many summits in the region that I have never hiked, many should be fairly easy and so I wanted to try a new one that would also allow me to be the first to activate it in the Summits on the Air program. I had hiked the Liumchen Lake trail twice before back in 2003 and 2005 and the Old Baldy trail follows that one most of its way. So, I thought it would be a good choice to try. I spent time reviewing the maps and posted reports about the hike and learned that the roads had gotten quite bad in the intervening years, this was a major concern for me as it could stop us well short of the trailhead. I figured that my truck could give it good try and so we planned to hike on July 1 a day Nick and I both had off.

Up slightly earlier than most week-end days, we got the gear loaded into the truck and were off shortly after 8:30. The drive to Starbucks went quickly, we also picked up some bug spray at the local drug store. Then a bit of fuel for the truck and on to the highway. Nick was driving this early part of the trip, I would take over on the forestry road. Unlike two days ago the highway was fast moving and we made good time to Chilliwack. In short order we were onto the Liumchen Forestry road. Nick pulled over for us to switch to 4x4 mode and I took over driving.

We quickly passed the military base and started down the slope to Liumchen Creek. There we were flagged down by a chap pushing his broken dirt bike up the hill. He asked if we could give him a pull to the top of the hill. I turned the truck around and tied a rope to his bike and pulled him back up the steep section of road.  Once at the top we sent him on his way and we returned back down the same road again. We crossed Liumchen Creek and drove until the fork with the Liumchen East road.

We turned up the branch and quickly started ascending the steep slope of the Church, Baldy flank. The initial section of road was in reasonable shape and we made good time up the flank despite the steepness and rough surface. Soon we came to a newly graded area where active logging was occurring. Here was the reason for the decent road, it was also one of my main concerns – did they block access with a gate? We continued through the active zone and soon pushed out the far upper end having avoided any gates. Now however the road was in its pre-logging upgrade state and the road quality quickly dove to poor.

The road was now much narrower and full of deeper holes and many deep-water channels cut into the road. It was no longer a road passable by a car, even many 4x4 drivers would think twice about this area. We slowly made our way up across the various obstacles and found ourselves at the next fork, the right-hand branch was the one we needed. It also was the steep rutted one. We drove up the road and fought some even worse ruts and large washouts on the road. Fortunately, we were able to keep going and soon we attained the ridge line where the road was in decent shape, this continued to the parking area at the trailhead. We arrived and parked the truck being the only one there and likely would remain so.

Nick and I donned our gear and started for the trail. This first section of the trail continues up the ridge to Windy Knoll. It was a very steep section and gains over half of the trail’s elevation gain in one short initial stretch. Not much past the start the trail levels out to a small plateau where the Church Mountain Forestry Radio Repeater is situated. We took a few moments to look it over while we caught our breath. Then back to the steep trail and our destination. Soon we reached the point where the trail leaves the open ridge clearing and enters the forest, here the trail levels off for a bit and allows one a bit of a rest. The trail switchbacks a few times as it ascends Windy knoll, fortunately we don’t need to go the whole way up, soon it continues south to the ridge line between it and Old Baldy. When it breaks out of the forest cover, we are at the top end of a grass clearing. It was along this section that I was in contact with some of my radio friends who were asking how we were doing and when to expect us to be on the summit. We still had a fair way to go!

Shortly after I arrived at the grass ahead of Nick, I heard a strange sound coming from just below which startled me. Searching for the source I soon spotted a buck crossing the low point of the grass, relieved it wasn’t something worse I sat down to rest. After a decent rest on the grass we descended the ridge to the first of two small rises between us and Old Baldy. The first we sailed right up and down the second we skirted maintaining a mostly level route. Then past the second knoll we needed to plan for a fork and our leaving the trail. Initially I thought we would be bush whacking at this point but I learned that there was a trail to the summit. It was marked by a very small sign on a tree. As we were starting to get close to where I had marked my map for the likely place the fork would be I turned back to Nick and mentioned that we needed to watch for a small sign.  When he reached me he looked on the upslope side and said – like that one? Go figure, I would have missed it but he saw it, amazing that I stopped right in front of it to say we needed to start watching for it.

This trail was still easy to follow but definitely less travelled and there were deadfalls in a few places that we had to work around. The trail initially ascended the short distance form the main one to the top of the ridge and then continued along it towards our goal. After a few hundred meters we broke out into the open northern flank of the summit, it being only around 80m further along. The final bit was quite steep but being so close to the end we took heart and pushed on to the summit. The summit area is actually fairly broad and as per it’s name mostly barren.

I took a short breather and then set up my two-meter yagi and soon was on the air logging contacts. After I had the first few in the log Nick finally arrived on site and flaked out for a rest. I continued to log a few more and then I slowed down to eat some lunch. About then another couple appeared on the summit! That was quite a surprise for us. We chatted a bit, they had parked beside us and told us that they were surprised to find a truck up there! They had hiked the trail before but never the one to the lake which looked quite lovely below us. I shared what I was up to, they were quite interested and glad it wasn’t ‘another drone’. It seems they encounter people with drones all over the place in their hiking. I next set up my 20m wire antenna and listened around for some stronger stations, it being the annual Canada Day Contest there were a decent number. I was able to work 7 stations on HF before Nick said he was wanted to start back, so I got the gear packed and loaded.

We then started the descent, it goes so much faster, with spikes on the shoes we zipped down the initial exposed flanks in no time and then through the forest to the main trail. We made fair time following the trail up the two knolls and then inched up the final grassy one before heading into the trees. We had gotten this far in an hour, much faster than the other way. Once rested, we couldn’t take too long as the mosquitoes were now out and targeting any slow-moving objects, we headed into the trees. This next steep section seemed to pass quickly and we soon found ourselves descending the open area along the far flank of Windy Knoll. The truck was soon in view and we were done. Even though the other couple had left the summit before us their truck was still there. I guess they decided to visit the lake before returning.

It felt good sitting in the truck and having some cool air blow on one’s face. Once we were rested and had everything stowed, we started out. The road went faster than on the way in thanks to gravity and being more confident with the obstacles as we had passed them once before. We made fast time down and soon were in Cultus Lake. Here the place had become crowded with people. When we had come by earlier it was quite empty. I checked my iPhone to view the road traffic and sure enough the main highway was bogged down and the radio on the LADD frequency full of truckers complaining about badly behaved motorists. We decided to follow the back-route home and though a bit longer it had no traffic issues to slow us. So we were back home just before 7pm a moderately long day but lots a great scenery at the summit and a first activation to brag about.