Our second try to reach the peak. This time the weather cooperated and we made it all the way. 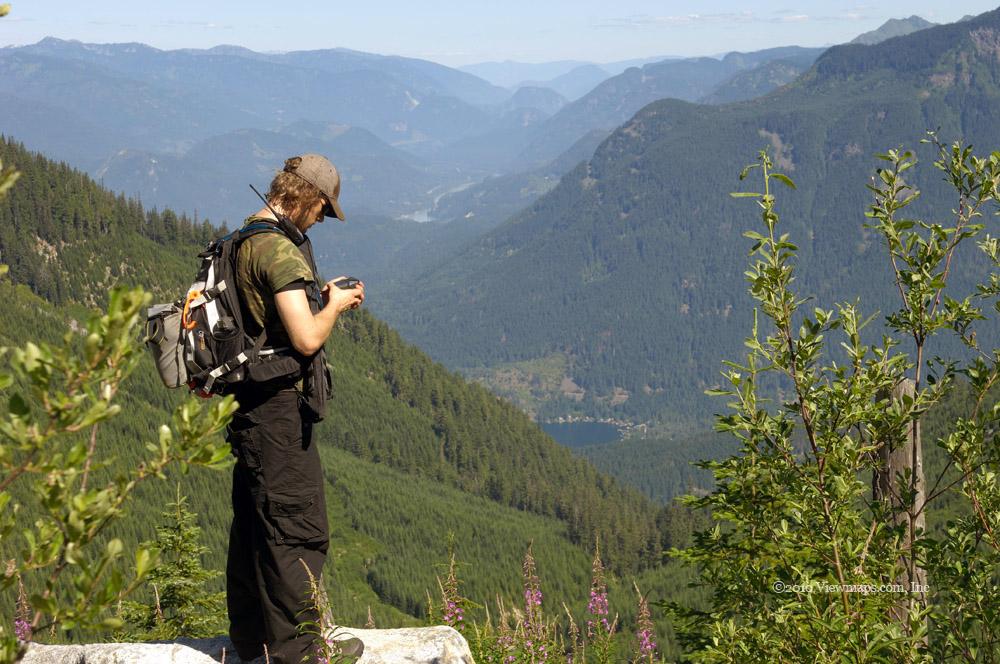 It was exactly a year ago that we first tried to climb Hope Mountain. Last August the weather was cloudy and the ground at this level was completely fogged in! That not only reduced visibility to near zero it also drenched all the plants along the trail which made us cold and wet before we got very far into the hike. Back then we planned a return to conquer the trail.

Arriving on site around 9:45, we quickly got organized to start the hike. It was our hope to make good time before the heat of the day. Once we were on the trail things progressed much faster than last year as the trail was dry and we were able to move along it much faster despite it being fairly overgrown in many places and hard to follow. It took us around an hour to reach the first ridge line which is where we stopped on our first attempt. This time we could actually see the peak from the ridge rather than just cloud. It looked challenging but now it was already much closer than when we started. Just before we reached the ridge we saw another group arrive near our truck and start up the trail after us.

So after a rest we started down the far side of the ridge to an old logging road which we followed along towards the peak. Soon the trail departed the road and started up slope taking us through even more overgrown trail sections. It was hard to follow the trail in places but we did manage to keep on it for the most part. The GPS route I had downloaded only had major junctions on it so I wasn’t sure we were always properly positioned. But since we made it to the top I guess we were close enough.

As the trail wended its way up towards the first saddle point we had ever nicer views north into the Hope area and Fraser Canyon. Soon the trail entered a nice treed section that offered some respite from the growing heat. Unfortunately the bugs were even worse in the shade and by now the bug repellant was starting to wear out. By the end of the hike I was well bitten by the bugs and I knew I would be in for it over the next few days.

Once at the first saddle point we started up the next rise, initially we continued through trees but then they parted and we were scrambling over loose rock for some distance. This was followed by some steeper sections where we had to make our way over larger rock outcrops. Fortunately there were enough grooves and flat areas in the rock to make it relatively easy to hike over. As we made our way to the top of this sub peak the steepness subsided a bit but we were again in the hot sun. It was here that the other hiking group finally caught up to us and waved by as they zipped past. Finally we reached the top and started back down to the next saddle point. This downward section was back in the trees which continued up the final slope. Despite the tree cover, this was a very steep section which slowed me down in the heat.

Eventually the trees gave way to a more level trail which opened up on to an exposed shoulder. There was a lovely pond here which provided me a nice place to get some rest along with a number of interesting photos. If we weren’t in a hurry to reach the peak, I could have stayed here longer to really explore the photo opportunities this pond offered. But we had to keep moving lest we run out of time before summiting. Needless to say but the bugs had now found us and were making the visit less enjoyable. So far this hike I had been communicating back home via the cross-band repeater in the truck. It was still quite usable even though we were now separated by two ridge lines, radio does still quite amaze me.

The final climb wasn’t that long but I was very tired and it being steep I was having to force myself forward every step. Ethan was also having some difficulty at this point; meanwhile Geoff was already at the peak! There was a short overhang we had to work across which wasn’t too hard but it did demand careful attention and a bit of planning to make it safely across. The final part of the climb was not difficult but was still fairly steep and so I was moving quite slowly. Eventually I reached the summit and was able to get some needed rest.

The view from the peak was stunning. One can see peaks in all directions, the Fraser Valley was partially blocked by mountains and that which was visible was obscured by smog. Looking south down the Silver-Skagit valley was a lovely sight in its own right. I could have stayed here till sunset but I was not prepared for overnighting it though it sure would have been a nice spot. Just down from the peak proper are two small ponds with many usable places to set up a tent. Maybe one day I will try that. Hope Mountain has four communication repeaters on it, three on the peak and a fourth just down from it. They were well served with several solar panels and battery storage packs.

Once done with the top we started back down and made quite decent time heading down. I was taking it easier than I often would go as the path was steep and my footing was not always that secure. Geoff zipped along at a fast pace and ended up waiting a half hour for us back at the first ridge line we crossed on the way up. At least with radio we were in constant communication which made it seem like we were all together. I really don’t know why others aren’t packing good communication gear with them.

Despite being very tired and ready for the trail to end, we did get back to the truck in one large piece. I am not sure how much I left behind to the bugs. The hike was definitely pushing me to my limits but it was sure worth the effort. I just wish there was an easier way to reach these lovely viewpoints. I would love to visit each of the peaks I could see from up there.

The drive home proved to be as much an adventure as the hike. We were listening in on the trucker frequency to hear of a car fire on a side road but visible from the highway. It was just west of Chilliwack and when we arrived near it the flames were shooting quite high. While this was going on, the highway was closed for traffic a few miles further west due to a grass fire that was burning between the two parts of the freeway. This drove people in all directions to find a way past. It certainly didn’t help that the Abbotsford airshow had just ended for the day and all those cars were also on the road. We didn’t get home to 8:45pm! So we were gone for 13 and half hours. A bit more than planned but then that is what the back-country is all about.