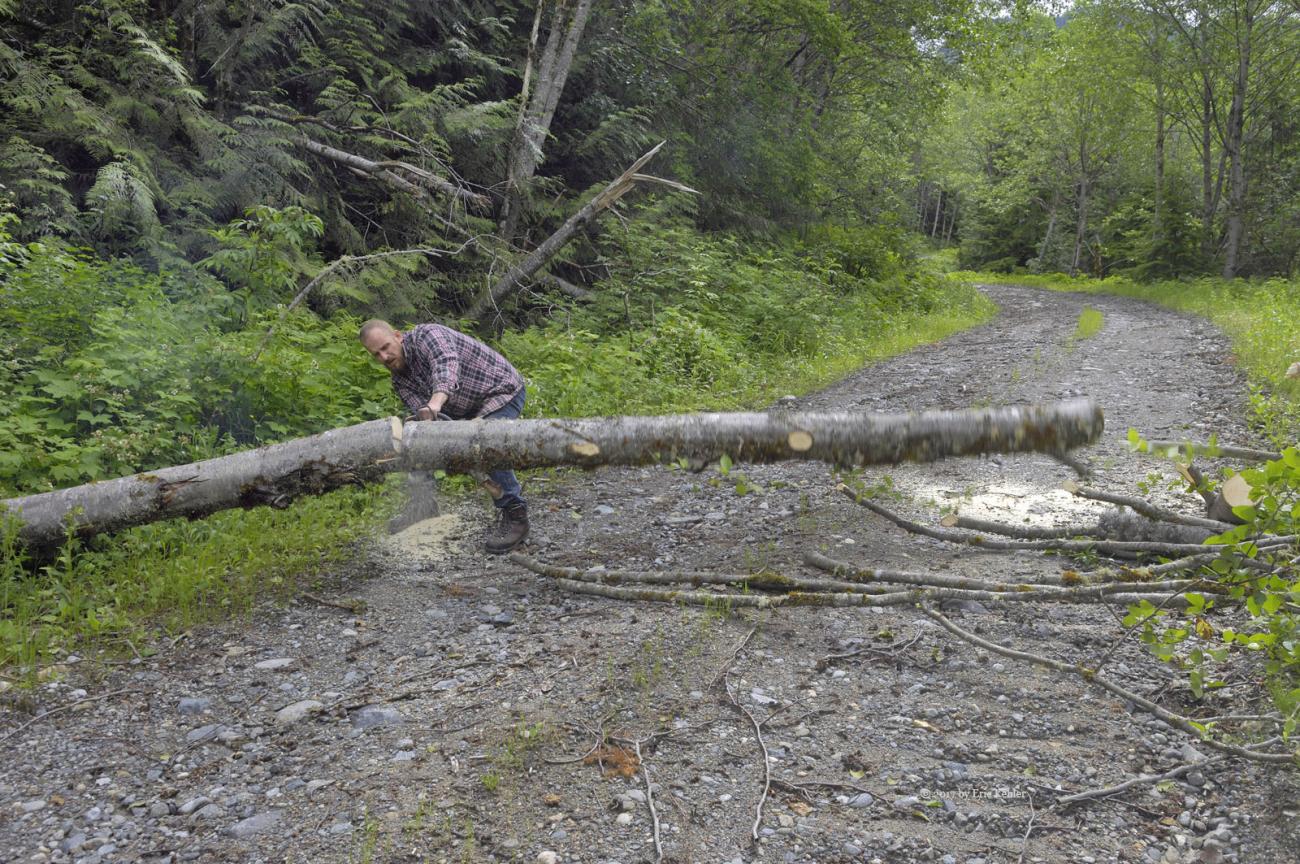 Geoff finally was free for a Saturday to drive the hills, so off we went for a day of refreshment and thrills in the hills. As it had been a month since out last trip I decided to play it easy and do an area not too distant. It had been six years since our last visit to Hunter Creek and I was very interested in seeing what had changed. As per our regular routine we loaded up, grabbed some coffee, fuel and beef and were on our way down the highway for the exit at the Hunter Creek Rest Area. So far all was as expected and we now started our way along the service road to the entrance to the FSR. We came upon a good number of 4x4’s parked at the entrance to the forestry road but we saw no people. There seems to be a side road down here the is popular with the atv crowd.  For us, we continued in.

Next was a sign instructing us to monitor radio channel RR7 and to be careful with construction vehicles, also that the gate would be locked at 6pm! That was interesting and unexpected, but as we continued in we noticed that the road seemed to be in quite good shape. Soon we reached the steep narrow section of the road which is cut into the cliff face, but it was totally sanitized. The worst section was widened and the cliff edge side was barricaded with concrete barriers making the road quite safe for the average construction worker! No more thrills driving here. Getting even more curious, we continued on wondering what we would find.

Soon we were heading into the upper valley having passed the cliff face much quicker than I expected. The next view was down below us across the creek – a partially built power house. We had stumbled upon a new run-of-the-river power project! Soon we came by the main admin area with a large sign instructing us to sign in with the safety officer, or at least his sign-in board. They confirmed that we had radio and advised us that they were hauling on the west side of the 5km bridge. There was a fork right before the bridge and we indicated we would be travelling that direction. So off we went, calling out our position and fitting in-between the heavy machinery that was preparing the trench for the penstock.

We arrived at the bridge and took the side road, so we were now out of the construction site. Now we had rough deactivated forestry road once again. About ¾ km in we were stopped by a tree across the road, but a few minutes with the chainsaw and Geoff had it cleared. Another half km in we were stopped by a mud slide across the road. It wasn’t too wet and we were able to clear a bit of the larger debris so after two attempts at it we were across. Passing the slide gave us good road for the rest of the day. The road continued up the valley for a ways before switching back to gain elevation. The drive was easy and soon we were enjoying great views of the valley. This side of the valley had fewer roads to explore but we were doing OK so far.

As the road climbed the slope it made its way back to the entrance of the valley and here was had a lovely view of the Fraser River and across to Deer Lake. We also were able to see the upper section of the construction work. The view was great but the cleared ridge just above us looked even better. So Geoff and I decided to go for a short hike up the slope and on to the ridge. Though we didn’t hike all that far, picking ones way through fallen slash does make it much more tiring than one expects. I did find a few sights to photograph but just being here was well worth the effort. We even came upon a few larger patches of snow. Well soon we had walked enough of the ridge for our needs having explored the small nooks and crannies that we found, so we returned to the truck and drove back to a fork.

We drove up the other side of the fork and planned to have lunch at the end. The road wasn’t very long but the end of it was hidden amongst the trees and offered no views, not a fun place to eat, so we drove back down to find a nicer spot for lunch. Another short spur soon presented itself and we drove in there and settled in for a pleasant hot meal. Once fed, Geoff set up his target and using his new rangefinder measured out 200m for practice. Meanwhile I went the opposite direction looking for scenes that I also could shoot with my equipment. After we were done with the site we turned the truck around and started back up the spur. As we crossed the second cross ditch we heard a loud sound of chain dropping! We had failed to close the tailgate and our bucket of hauling chains had fallen out. Oops. Well, while I gathered up the chain Geoff walked back along the road to our lunch site looking for anything else that had vacated the truck bed. He found some of his gloves that he had left on top of the cover.  Well, all was retrieved and the gate closed so we started on our way back.

We soon reached the mudslide but this time we had no issues crossing back over, the cut tree was still cut and soon we were back to the construction zone. One excavator pulled aside for us to pass but a large hauler was backing up towards us so we had to wait for it to arrive and get past before continuing to the admin site and the sign in sheet to sign out. The drive back down the steep cliff face was again dumbed down and we were soon back to pavement for an early return. We drove a leisurely speed back to Chilliwack where we stopped for a coffee before driving the rest of the way home. Though a short day, it still felt great being out there and getting some fresh air.