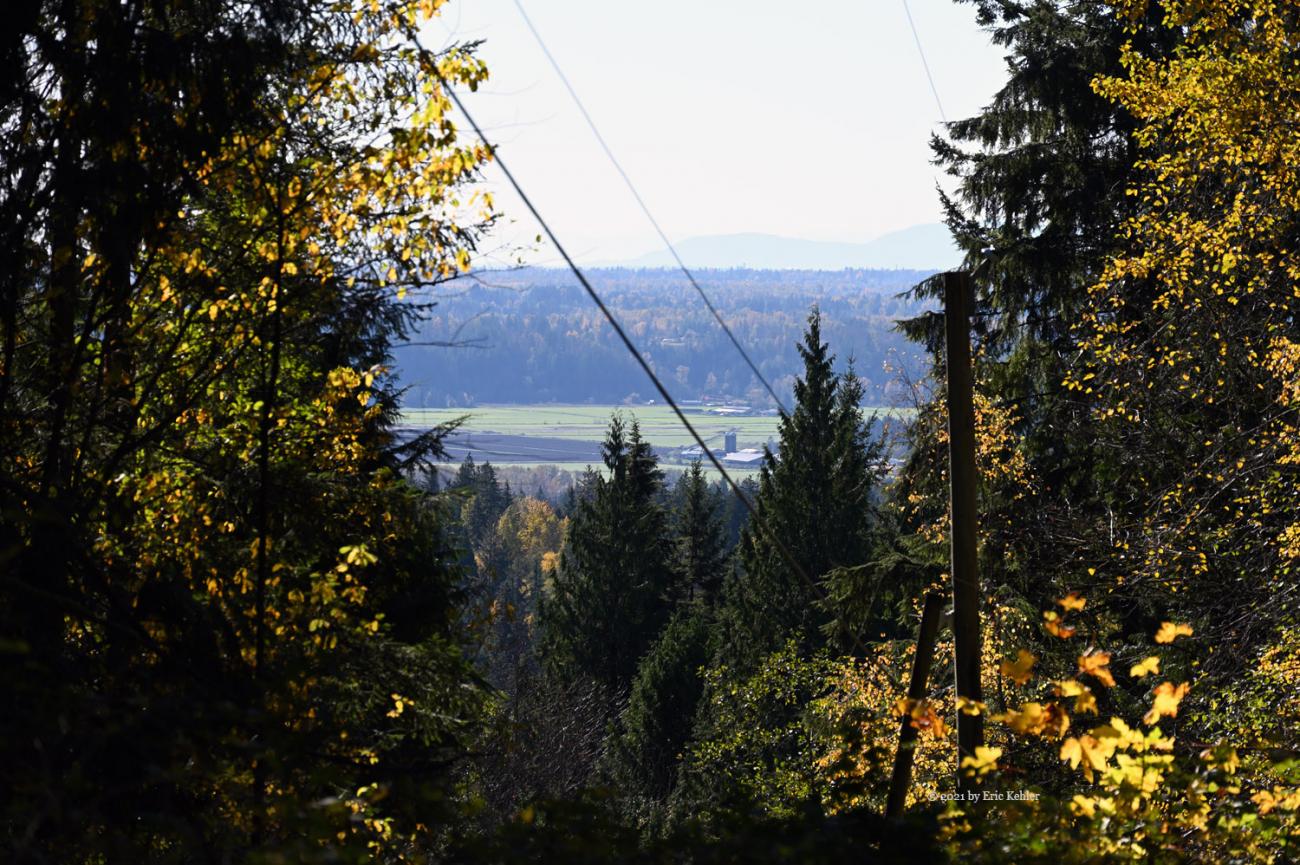 The new additions to our summits list finally added Iron Mountain. This small mountain is located between Maple Ridge and Hayward Lake, making it fairly quick to drive to. The summit has a cell tower on it with a service road to it. Though the road is closed to public vehicles, one can walk it with no issues. Ralph and I both wanted to get out into the fresh air again and this little guy was a perfect fit for a morning adventure that wouldn’t be too taxing or covered in snow.

Saturday morning was cool but clear and the sun was already starting to warm things as we scraped the first frost off the windshield. We hoped it would warm up a bit more for our time on the summit. We made good time to Maple Ridge and along highway 7 to our exit at 280. We continued to 108ave and then up 286th but our destination was wrong, we wanted the next street over! Fortunately, there was a cross street just ahead and we were soon at the end of 288th. There before us was the service road, a gate and what appeared to be a steep grind.

I parked the car along side the road and we got our packs on and headed for the service road. A chap watching us from his driveway next to the road was quite friendly in telling us about the service road as he had walked it many times. We started up the road and past the gate, though it seemed steep from the start it wasn’t really that bad as the steep parts were short. We continued along, passing one fallen tree and a few large puddles but generally it was an easy walk. Soon we rounded the final switchback and saw the tower before us.

The top area was fairly broad with two buildings and the tower. Up here the sun was warm but there was a fairly brisk wind, so I selected a spot next to a building for a wind break. The south facing stairs to one of the buildings looked inviting for a place to set up. It was a good choice and soon I was making some radio contacts. Ralph was still scouting the area for a place to string his antenna. He needed a bit of help pulling up his line and shortly after he was ready to call. He soon had a station from France and another from Spain in the log. I was busy trying to rouse a few sleepers onto the local vhf band. I did finally mange a few including a chap in Saanich.

It was a pleasant morning on the summit, we both got more than enough to activate the hill for the first time. Once we had enough, we stopped for a quick bite of lunch before packing up. While eating a jogger came up the road; we chatted for a bit, he was a local who regularly runs to the top and back. I’m not sure how he manages the rough gravel surface but he seemed content enough with the road to do it repeatedly. He mentioned that there was a nice trail to the viewpoint on the south slope of the hill. We thanked him for the tip as I had been considering taking a detour on our return to see it. As we descended, we watched for the trail and eventually found it, but the map showed the viewpoint to be a fair way along and so we opted to keep going down and try it another day. Soon we were past the gate and onto the pavement with the car only a few meters ahead.

The summit was and easy walk but there were no views from the top. The main viewpoint is quite a distance away and has its own trail loop for hikers to follow.  The summit is less travelled but it is what we need. It is a good summit for the cooler weather when the big ones are snowy. I will be back in the early Spring for a second activation of the summit while I wait for the big ones to be clear of snow.