Watch out for the discs! A spacious area to spread out one’s antennas – almost
Category
Parks on the Air
2022 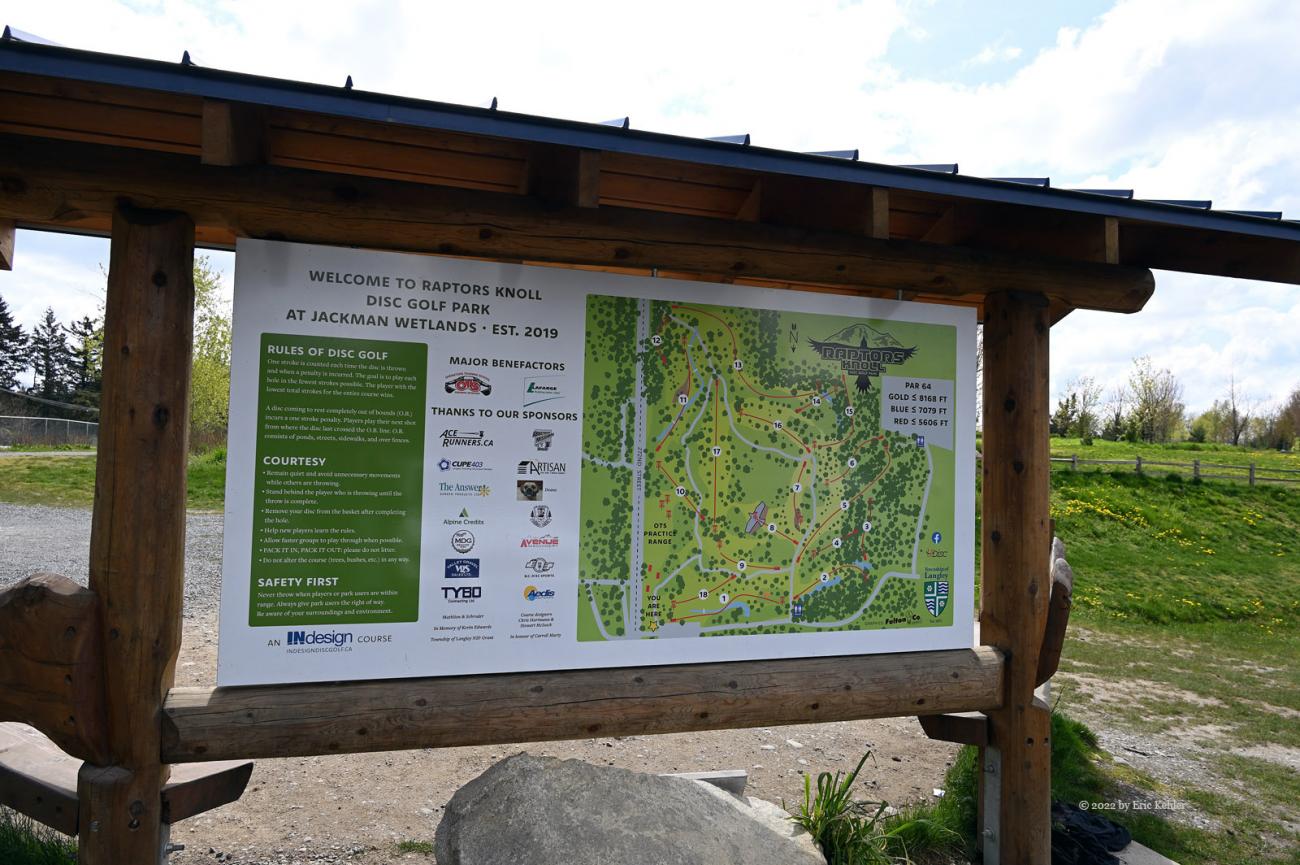 The day started a bit questionable but as the morning progressed the day looked nicer and so I decided to head out for a park. The bands were still not great and so I wanted to go to a park that wasn’t in the midst of houses. The Jackman Wetlands Park looked like it would fit the bill. So, I quickly packed my gear into the car and set off for the park, arriving around 1:30. I noticed that the parking area was almost full. That surprised me as I wasn’t expecting many to be out mid-week. I did find a spot and parked the car.

As I was starting to unload another driver came by and parked. She noticed my camera and asked if I was here to see the Sandpiper bird. I said no which disappointed here but my parks-on-the air activity seemed to catch her interest. She went on her way along the gravel walkway and I finished loading the cart. I then checked out the sign saying that the golf course was free to use. That seemed interesting as all the ones I knew charged quite a bit to golf on. It wasn’t until I was picking a spot to set up that I learned that this was disc golf (frisbee).

I next followed the main roadway path to the wetlands area and came by a fork where the outhouse was located. Here I opted to turn off the route to the wetlands and instead climbed a short rise into the golfing area. The paths went in several directions and I followed one to an open area. While there, a couple of players came by and I asked if this was a safe spot to set up. They said that it really wasn’t as it was too close to the disc target for that ‘hole’. It was then that I learned about the type of game the course was designed for. I wandered back and found a nice spot alongside a walkway that was not in a fareway.

I took a few moments to watch those two guys start on the next fareway, their throws were quite amazing and the disc followed the bend in the route quite well! They had several different discs for various conditions much like selecting the best club. Back to my radio, I strung the antenna between a tree and my fence post and then dialed in the 20m band. The noise was very high around S6 with the pre-amp. Not much different than when I am in a residential area. As this area used to be the old garbage dump and it is now a managed methane producer, I wonder if that had any effect on the RF levels.

I started calling and found the band quite empty. Eventually I started to get some contacts. Several were other park activators looking to make some contacts as they were also experiencing a loud background noise floor. I ended up with 4 park-to-park contacts a record for a single activation. Conditions did seem a bit better than the day prior but still not great. The contacts’ locations were closer in than normal with the furthest being a station in Kentucky. After 30 minutes I reached the needed 10 contacts another 10 minutes gave me 4 more which I felt was enough for the day. My last contact was with a BC station mobile in California. That took me quite a while to get his callsign correct with his weak signal and the noise. The time between my first and last contact was 40 minutes, so a slowish but steady rate for the day.

While I was operating a few groups came by walking the paths and playing the game. A few stopped to ask about the activity and were quite surprised to learn that I regularly made contacts to the east coast and other distant places including Europe. Done with radio for the day, I packed up the station and started back along the pathway to the parking lot. I passed a number of people heading out to the wetlands portion of the park to see the bird. I was tempted to stow the cart in the car and wander back but in the end, I just watched a couple more disc players start out. They had strong throws but they weren’t straight and their discs went out of bounds. Done with the park I made for home. It being a bit later and, on a Friday, I encountered more traffic on the route which delayed me getting through a couple of lights but overall, the drive went smoothly and fairly fast. It is a lovely park and offers some nice spots to operate at, I do plan to come back here and maybe even visit the wetland portion.