A lovely little park on the side of a school ground.
Category
Parks on the Air
2022 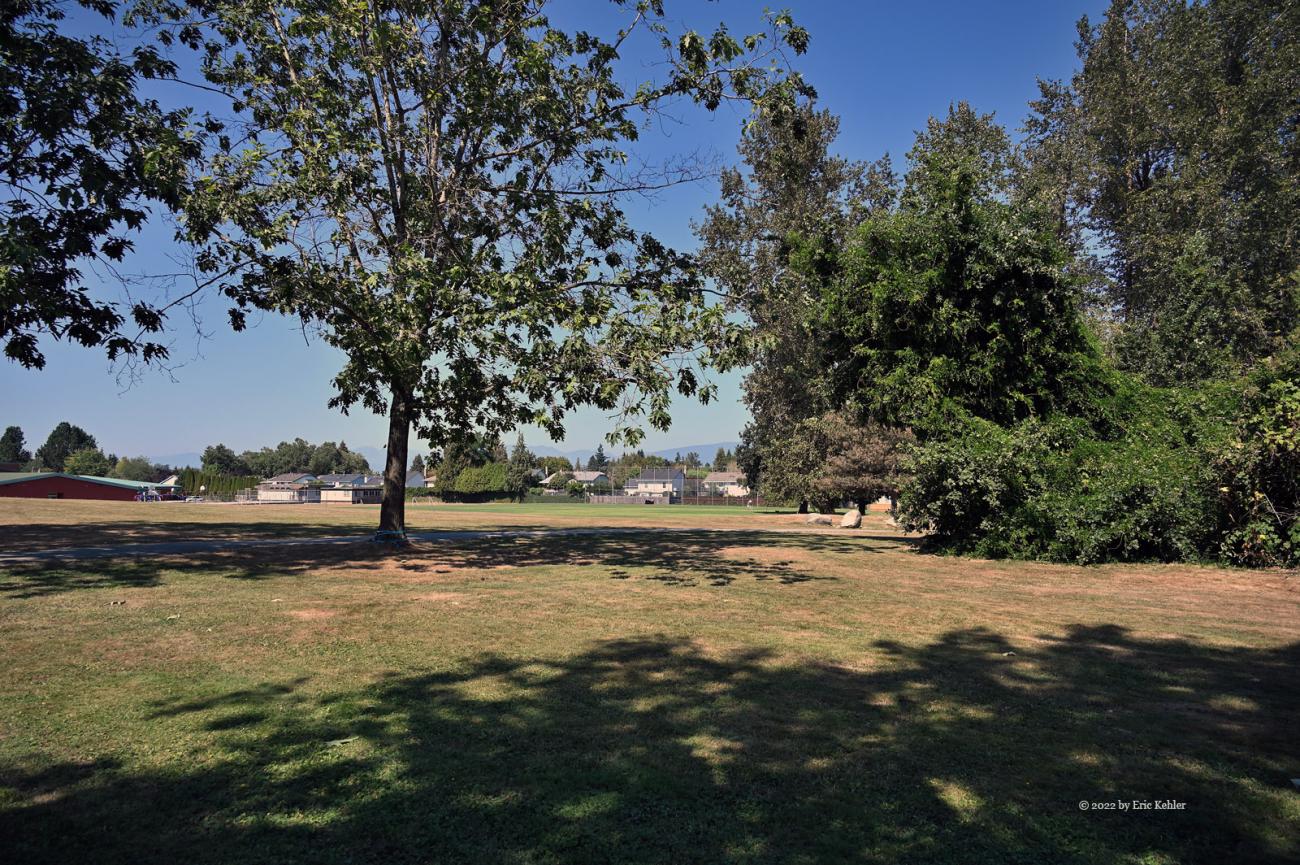 Ralph was back from a trip to Kelowna where he managed a park activation and he was ready to go again for a local park. I suggested a park in North Langley and he came back saying he wanted one with adequate shade due to the heat. I reviewed the original choice I had been interested in and determined it had no shade trees so I looked for another park near it and settled on James Kennedy Park. We set out at the usual 12:30 time period and made for the park. It was a 37-minute trip.

We arrived at the destination determined by the navcom and found a place to park alongside the road next to the park sign.From there we loaded the cart and set out for the park. This park has a nice pathway gravelled for a climb from the road to the field level and on top there was a meandering paved foot path. Ralph picked a spot close to the entrance and I followed the path to the far side where there were a few shade trees to pick between. Having chosen my tree for the day I set up the table, antenna and radio. I then started out by scanning the band, everything seemed very quiet and I was wondering about the band conditions.

I then reviewed my radio set up and discovered that the power amp was not turned on. Once corrected, the band volume went way up, I now also had an S7 noise level! I rescanned the band for any park-to-park opportunities but didn’t find one I could hear adequately. I then picked a frequency and started calling. Very soon I had a station in Spain contacting me and I managed to get my first contact. A few minutes later a second hunter was in the log. Then as I started calling for the next station, a group of three police patrolling on bicycles came by asking about my activity. They were quite impressed as I mentioned I had just talked with a station in Spain. They hadn’t heard about POTA but thought it sounded quite interesting.

Back to the radio, times were quiet for a few minutes before a station in North Dakota came along. The going was slow but better than some outings. By 50 minutes of operating, I had managed exactly 10 contacts, Ralph called on the 2m hand-held saying he had sufficient and would be packing up I told him I needed another 10 minutes. I decided to scan the band one last time and managed to find a loud park activator and finished my day with a park-to -park contact from Colorado. So, I had eleven in the log for the day. It was enough and I was successful so I packed up the equipment and returned to Ralph and then the car. We decided to go to Starbucks for a coffee and we had a nice chat over a cool drink before driving home.

It was a pleasant outing at this little park which I found quite pleasant. It had just enough trees to offer shade and some interesting secluded spots. Sitting in the shade was enhanced with a lovely cooling breeze that lasted most of my time at the radio. I may well return to this spot one day.