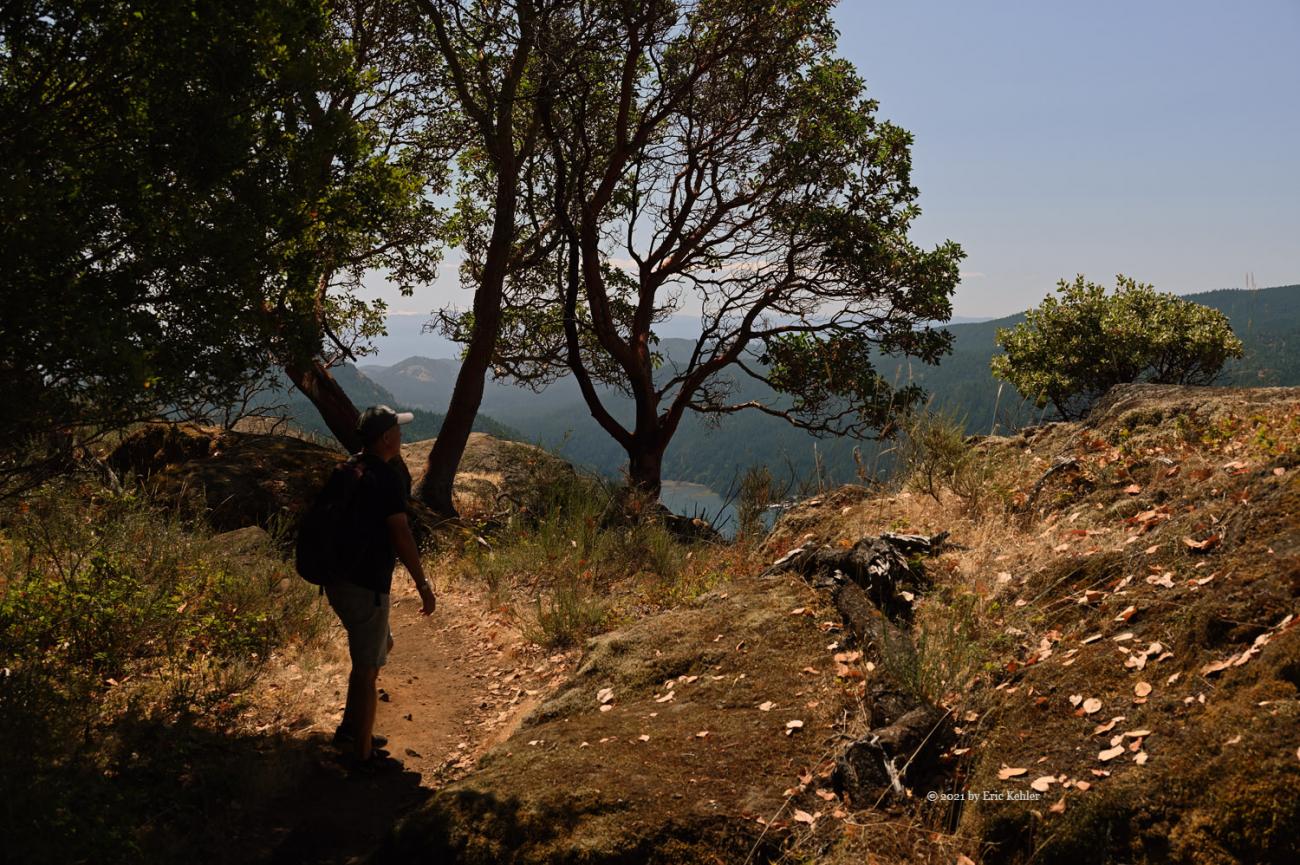 For my third summit during my Victoria vacation, I chose Jocelyn Hill. I hadn’t been to this summit before so it would also give me a new unique for my log book. I had been planning to do this on my next trip before Covid delayed things so finally, here was my chance.  My cousin Jim who lives in Victoria was interested in joining me on this hike as he had never been here either. So once breakfast was complete, I organized my stuff and set out for his place. We then set out for the trailhead for Jocelyn. It was far up the highlands area and we enjoined the long twisty road as we made our way there.

Arriving at the trailhead we noticed that there was a wide shoulder to park on. Even though this rural road would see little traffic signs here stated to park off the pavement and others were restricting any parking. So, it must be popular enough to be a nuisance to the locals. When we arrived, 3 other cars were already parked there. We donned our gear and set off for the trail. This one starts off with some early steep climbs but then settles down for a more pleasant walk for some distance.

After following the spur from the road to the main trail we soon joined the trail coming up from the south. Here we continued on the min trail north towards the summit. This trail was quite wide and pleasant to follow but soon it climbed up a washed out rut which made the way a bit more challenging. We then reached another fork where we chose the one along the bluff top which made straight for the summit area. We were now enjoying some amazing views of the Saanich inlet and of the Malahat district. Jim was looking for a new tourist attraction across the water – the Malahat Skywalk – but we weren’t finding it. We continued north along the bluff stopping here and there to collect some photos. Soon we reached the main viewpoint just below the summit. There were two women sitting enjoying the view when we arrived. We chatted for a bit and then continued on.

It was here that we left the main trail for a small side one that seemed to head straight for the summit. Unfortunately, it soon faded out. But we were only yards from the summit so we continued up and crossed the continuation of the main trail! As we were at the summit, I selected a spot with some shade and a good view to the north and east. After a short rest I set up the yagi and radio and put out a call. Ralph from home immediately responded and I had my first contact. Next, I worked a station on a summit to the  south near Mount Rainier giving me a summit-to-summit. I worked him off the back of my beam which seemed odd as turning it towards him reduced the strength. It seems we were working through a reflected path off of something north of me. I continued for the next 20 minutes and logged a total of 9 contacts. As Jim was with me, I didn’t want to take too long though he did seem interested in the exercise and explained a bit to a few groups who were passing by on the trail.

Having sufficient contacts to activate the summit I packed up early and we started back along the main trail. On reaching the bluff edge we finally spotted the Skywalk across the inlet. It did seem to have a good perch on a protruding point so it should have a wide view. Well we both accomplished our goals for the hike and now we just had to get back. We continued along the trail to the main view and then south along the path we had come. It had gotten a lot hotter by now and though we were mostly downhill the heat was taking its toll. We did come across a number of very pretty spots to photograph which also slowed us a bit. Unfortunately, we soon we had to turn in away from the bluff and head through the forest to the trailhead. It went quickly and before much more suffering we had arrived at the car.

We got the car turned on and sat enjoying some AC for a few minutes before setting off. Jim asked if I had time for a late lunch, I did, so we made for a restaurant for a light meal. We both quite enjoyed the hike. I found this one easier than the Mt Work hike of the day previous and the views are much better. If I have to pick between them Jocelyn will be the choice for future hikes.