The Joy of Sumas

Every time I return to a summit, I find something new, this trip offered an amazing new find
Category
Serendipitous Discoveries
Summits on the Air
2021 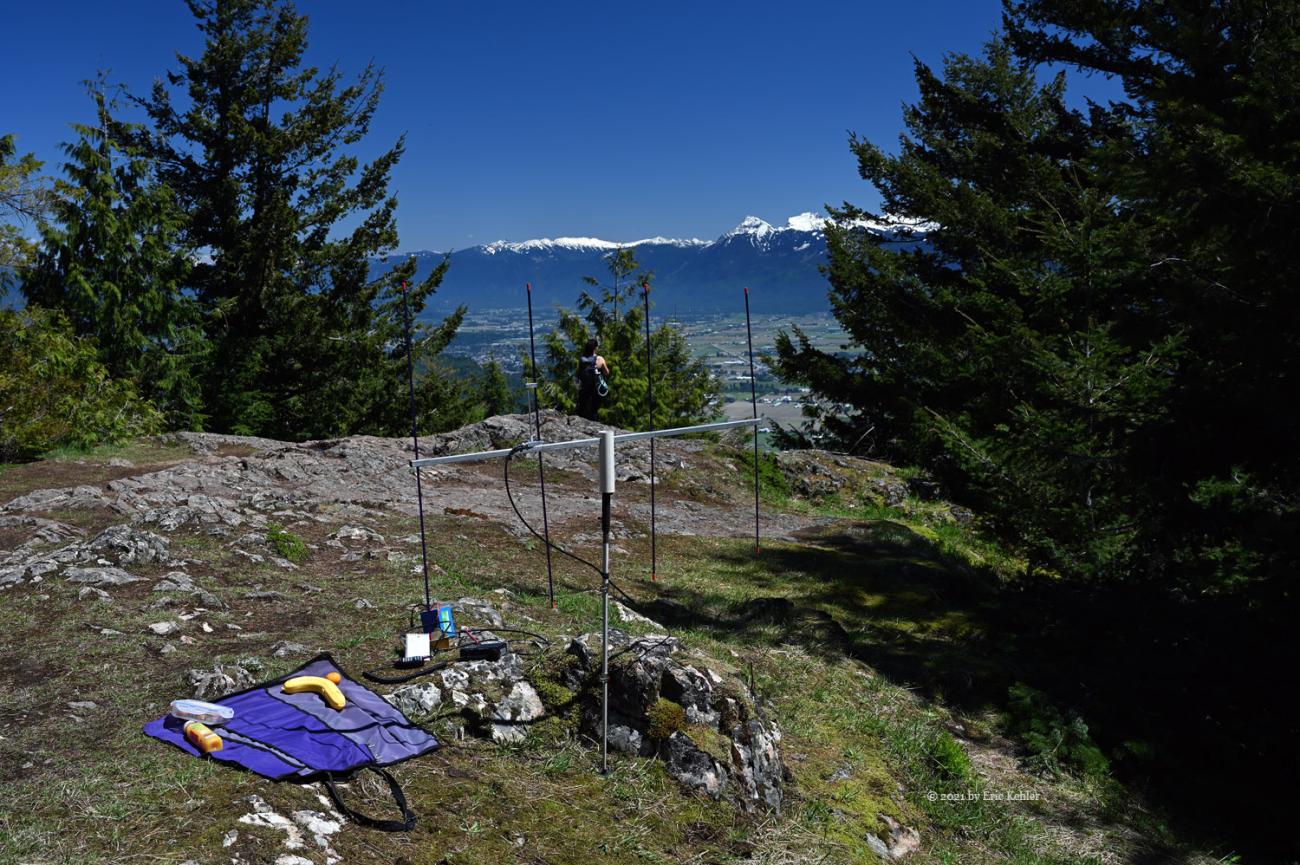 While for years Sumas Peak was ignored and simply driven past while on the way to a more distant location, today it has become an annual event to hike the road and trails to the viewpoint and talk with a few other ham radio enthusiasts. So, it went again for 2021. This year I was watching the snow levels on Cypress which at the same elevation still showed some significant amounts of snow, this made me a bit apprehensive as to what I would find. Well worries were for nothing as I didn’t come across even a small smidgen of snow. I had also originally planned to hike with Ralph but he ended up helping out with a parade so was unavailable for the day. My son Nick felt he could enjoy the hike and so the two of us set off for the summit.

We left the house at the reasonable hour of 9:15 and made for coffee, fuel and the forestry road. All went smoothly as we started up the road. Dodging cyclists is a required driving skill on this road as such, we passed a good number on our way up and later as we returned. When we reached the top parking area and overlook the place was already full and there were no parking spots to be had. Fortunately, we were continuing on another half kilometer to the gate at the end of the publicly drivable road. There we found a few parked cars but my regular spot was open and so we claimed it for the day.

Having parked, we got our gear donned and started along the upper section of road. 45 minutes later we were at the sign directing hikers to the final bit of trail to the eastern summit. After a brief rest we continued along the trail to the viewpoint. I gathered a few photos and then we claimed a spot under the trees next to the open area where Nick spread out to rest. I started to set up my gear but heard a fellow SOTA operator calling from a nearby summit. I had my hand-held with the collapsible ½ wave whip ready to go and as I heard him on it, I called back and had my first contact before I was even set up!

I quickly set up my beam and mobile radio and started making calls but the trees were constantly snagging things and generally making life miserable. It seemed I just couldn’t get through while under the tree. I moved out into the clearing near the view and started calling again. Here I was able to work a number of stations in short order. It seems that one had to point the beam at the far set of peaks in order to reach the stations behind me! I guess reflected signals are better than ones sucked dry by the trees. I soon had enough in the log to relax.

After almost an hour and a bit of excess sun from being in the open I was ready to pack up. But I heard a call from a station on a summit down the sound near Mount St. Helens! They had the same ½ wave whip on a hand held as I and it reached me 271km distant. So, I had a third summit-to-summit in the log for the day. I am always impressed with that type of distance on the 2m band, and that whip antenna is definitely quite impressive. Well, I was done with radio for the day and so I packed up my gear. Around the time I was finished packing up, a chap I had talked to earlier stopped by to tell me that I really needed to go see the second viewpoint. It was better than this official one. I had heard that it was there but never took time to visit it. He said it was less than 5 minutes along the trail though there was a short steep section at the start.

Once done stowing my radio I let Nick know I was going to visit the second viewpoint. He grunted and off I went. The first bit was indeed steep but only for about a 10m drop then the trail was fairly level until a short rise just before the view. I got to the view after a few minutes’ walk and was amazed at the sight. This was a fully unobstructed view to the north-east through south! The sight was amazing and so worth the few moments to get there. I stood amongst the others who were enjoying the view and gathered a few photos. Then I grudgingly turned my back on the sight and walked the trail back to Nick and finished loading my backpack for the return to the truck.

The secondary viewpoint is so much better than the ‘main’ one and any time I return here I will definitely take the time for a short visit to the spot. It really offers some amazing photo ops. Our trek back along the trail and road went without incident as we avoided groups and bikes coming towards us from below. Being a lovely week-end day, the place was quite busy but even so, we still had most of the time to ourselves. It is a very nice summit to activate and return to each year. If only one could get more than one activation of a summit in a calendar year.